Marles told military top brass he was likely to be defence minister in Labor government: sources

Labor deputy leader Richard Marles told members of the military’s top brass he would probably be defence minister in an Albanese government, in a move that caused ructions inside the party.

Opposition Leader Anthony Albanese has also told senior members of his party that the only two frontbench roles guaranteed under a Labor government are Jim Chalmers as treasurer and Penny Wong as foreign affairs minister. 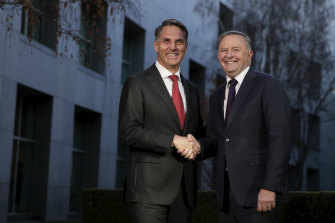 Multiple Defence and Labor sources, who are not authorised to speak publicly, confirmed Marles late last year gave senior members of the Australian Defence Force the strong impression he would take over the portfolio if Labor won the election.

Albanese on Monday moved to hose down speculation over his potential frontbench if he is elected on May 21. Albanese said he expected all of his team to remain in their current jobs “as a starting point” but he did not rule out some changes.

The speculation has unsettled some in the party because Marles only moved out of the defence portfolio in January 2021, with veteran MP Brendan O’Connor taking on the role.

Marles was given a super portfolio of national reconstruction, employment, skills and small business, as well as science, in a move designed to get him more involved in domestic politics and help shore up Albanese’s leadership.

As deputy leader, Marles would have the right to choose any role he wanted in government, including the coveted treasury and foreign affairs portfolios.

But Albanese has told senior members of the party he wants Chalmers as treasurer and Wong as foreign affairs minister if he forms government.

Albanese said on Monday: “I expect that everyone will be in their current jobs, that is my starting point.”

“It is possible that someone says ‘I don’t want to do that job’ or what have you – that happens from time to time.

“But it doesn’t happen over someone like Jim Chalmers being the treasurer of Australia.”

Multiple Labor sources confirmed there were also questions over whether Kristina Keneally would stay in the home affairs portfolio if Labor won the election.

Asked whether he could guarantee Keneally would stay in home affairs and O’Connor would remain in defence, Albanese said: “Well, that’s my starting point.”

Marles has long been interested in national security. One source said he would ordinarily take foreign affairs, but he would not move on Wong.

Both Marles and Labor’s campaign headquarters declined to comment.

Marles was active in his 4½ years as Labor’s defence spokesman, calling on the government to consider conducting freedom of navigation exercises in the South China Sea while criticising its handling of the relationship with Beijing.

When asked on Sunday whether he would like to be defence minister, Marles said: “I’m not going to walk down this path.”

“I’m focused on the job between now and the 21st [of May],” he told the ABC’s Insiders program.

“So that will be the normal course whoever wins. But right now there’s an election to be won. I’m focused on reconstruction. I’m very excited and energised about this portfolio.”

Labor has criticised Morrison for not naming a replacement for Health Minister Greg Hunt, who is retiring at the election, but the prime minister on Monday said he would be “announcing that this weekend”.