State and territory leaders have been told restrictions including stay-at-home orders and a ban on any travel should remain in areas of concern where thousands of cases are reported each day even when 70 per cent of the eligible population is vaccinated.

Concerns were raised in Friday’s national cabinet meeting about whether the health systems in NSW and Victoria could cope with the ongoing outbreaks. The bulk of the country’s more than 1800 cases on Friday were in those states, and there have been 12,519 cases reported over the last week. 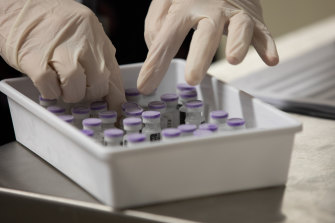 GPs in most states and territories can now administer the Pfizer vaccine to everyone aged over 12 as long as they have enough supplies.Credit: Supplied

So far 45.4 per cent of the eligible population aged 16 and over is fully vaccinated and 70.5 per cent of that population has had one dose, passing a “significant and important” national milestone, Health Minister Greg Hunt said.

“My hope is that everybody, everybody who has not yet taken the vaccine will come forward over the coming days and weeks, and there’s sufficient vaccine for every Australian before the end of October, if not significantly earlier,” he said.

Under the national plan, restrictions can begin to ease once 70 per cent of the eligible is fully vaccinated, and more freedoms will be introduced once 80 per cent have been double-dosed.

But a sensitivity analysis of the modelling that informed the plan, conducted by the Doherty Institute and presented to state and territory leaders on Friday, found that if daily case numbers were in the thousands it would be prudent to keep “medium” public health safety measures in place in locations of concern until that 80 per cent target is reached.

The Doherty Institute defines medium public health measures as the measures that were in effect in Sydney on July 1 this year, which include no interstate travel, stay at home except for essential purposes, work from home if possible, but some limited seating for hospitality venues.

The analysis also showed, however, that the original plan to begin transitioning at 70 per cent fully vaccinated remained broadly robust even if an outbreak started with thousands of cases.

Given the pace of the vaccination rollout, the federal government estimates it will take two weeks for the double-dosed vaccination rate to climb from 70 per cent to 80 per cent.

As most of the country begins to look towards opening up, all state and territory leaders agreed to integrate vaccination certificates with check-in apps so greater freedoms can be considered for the fully vaccinated.

GPs in every state and territory bar NSW, Victoria and the ACT can book over 60s for Pfizer vaccines, and President of the Royal Australian College of General Practitioners Dr Karen Price said the federal government should make that a national guideline.

“That would be really smart,” she said, but emphasised it was important Pfizer bookings for over 60s were not prioritised over other vulnerable groups. “What I hope it means is there’s a turning of the tide in terms of supply.”

The supply of mRNA vaccines is rapidly increasing. September’s doses have been doubled from initial forecasts to roughly 11 million doses of both the Pfizer and Moderna vaccines.

d to 1800 pharmacies around the country, where pending medical regulator approval they will start going into people’s arms from the middle of next week.

Doctors in Queensland, Western Australia, the Northern Territory, South Australia, and Tasmania will soon be able to administer Pfizer to patients aged 60 and over after those states changed their eligibility criteria. Across the country, roughly 470,000 people aged 60 and up are yet to have a first dose.

A spokesman from Operation COVID Shield said the national policy – which states AstraZeneca is the preferred vaccine for people aged 60 and over, and Pfizer should be used in people aged under 60 – hasn’t changed, but as long as primary care providers were not turning down priority patients (including 12 to 15-year-olds and pregnant women) they could match state guidelines on vaccinations.

After Queensland announced it would open up Pfizer doses in its state-run hubs for over-60s, the state’s Health Minister Yvette D’Ath said the government wanted to make sure people were getting choices.

“The Morrison government promised people over 60 that later in the year they would be given a choice of vaccines. We know people want to get vaccinated, but there are some who haven’t yet,” she told reporters on Friday.

Mr Morrison flagged he expects an end to hotel quarantine soon as NSW announced it was trialling seven-day home quarantine stays for a small number of people returning from overseas.

“It’s got a use-by date on it. There’s no doubt about it,” the Prime Minister said on radio station 2GB. “In the national plan I set out back in early July, it actually requires this [move to home quarantine] once you get to the high levels of vaccination.”