Red alert! Meghan Markle cuts a striking figure in a scarlet £1,100 Valentino blouse and £1,200 wide-leg trousers as she and Prince Harry arrive at the One Young World summit in Manchester

Meghan Markle looked effortlessly elegant as she and Prince Harry attended the One Young World summit in Manchester this evening, where the Duchess is giving a keynote speech.

The Duchess of Sussex, 41, opted for an all-red ensemble when arriving at Bridgewater Hall alongside the Duke, 37, who both travelled to the city via train.

It is their first public appearance in the UK since returning for the Queen’s Platinum Jubilee in June as Harry’s legal battle with the Home Office rumbles on after they were denied 24/7 taxpayer-funded armed police bodyguards.

The event brings together young leaders from more than 190 countries and where Meghan, a counsellor for One Young World, is due to give a speech on gender equality.

The couple were earlier pictured going into a side entrance of London Euston after being driven the 27 miles from their UK base at Frogmore Cottage in Windsor to the railway station in a hybrid electric Range Rover – a journey taking about an hour. 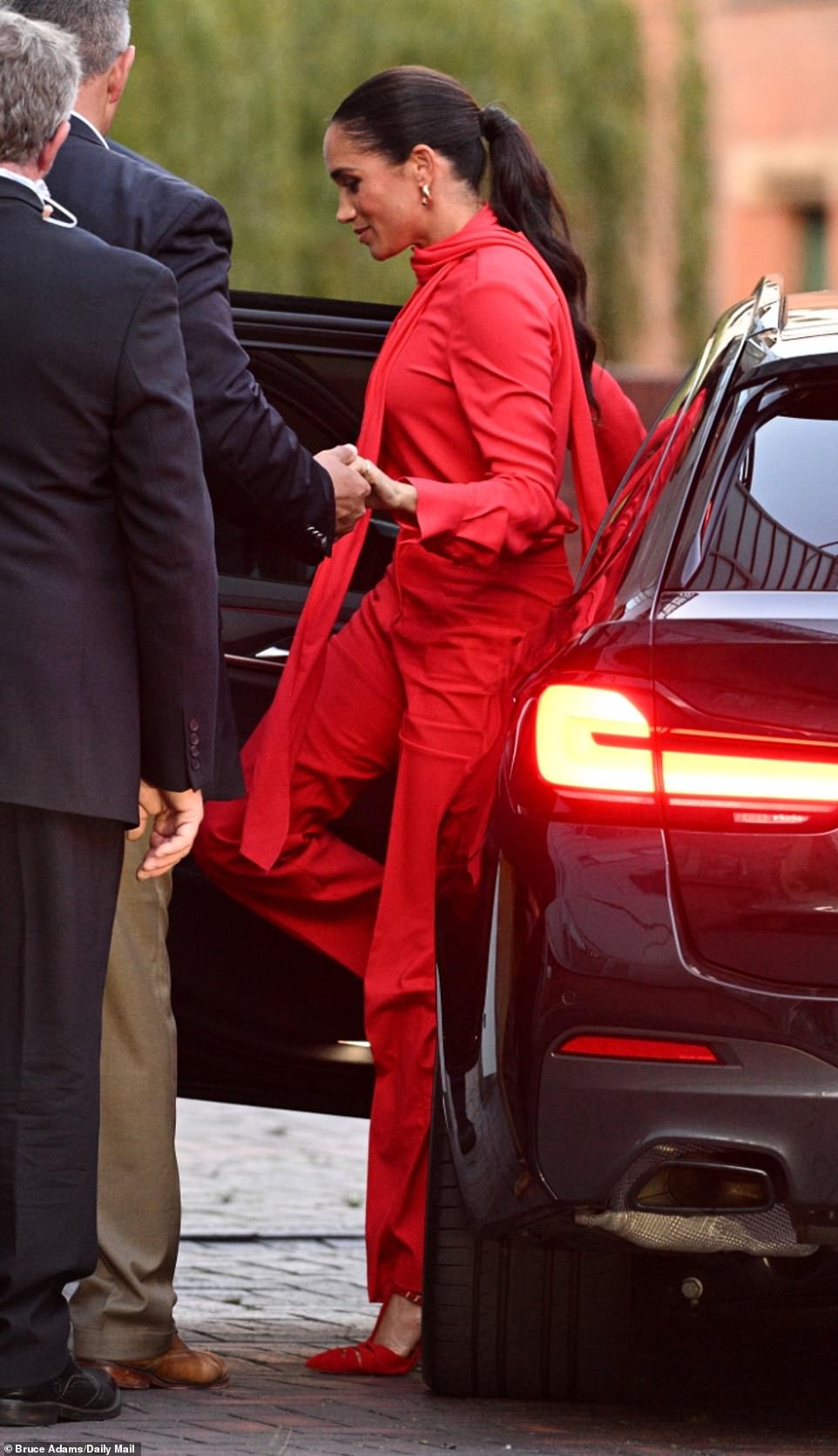 Meghan Markle looked effortlessly elegant as she and Prince Harry attended the One Young World summit in Manchester this evening, where the Duchess is giving a keynote speech

The Duchess of Sussex, 41, opted for an all-red ensemble when arriving at Bridgewater Hall alongside the Duke, 37, who both travelled to the city via train 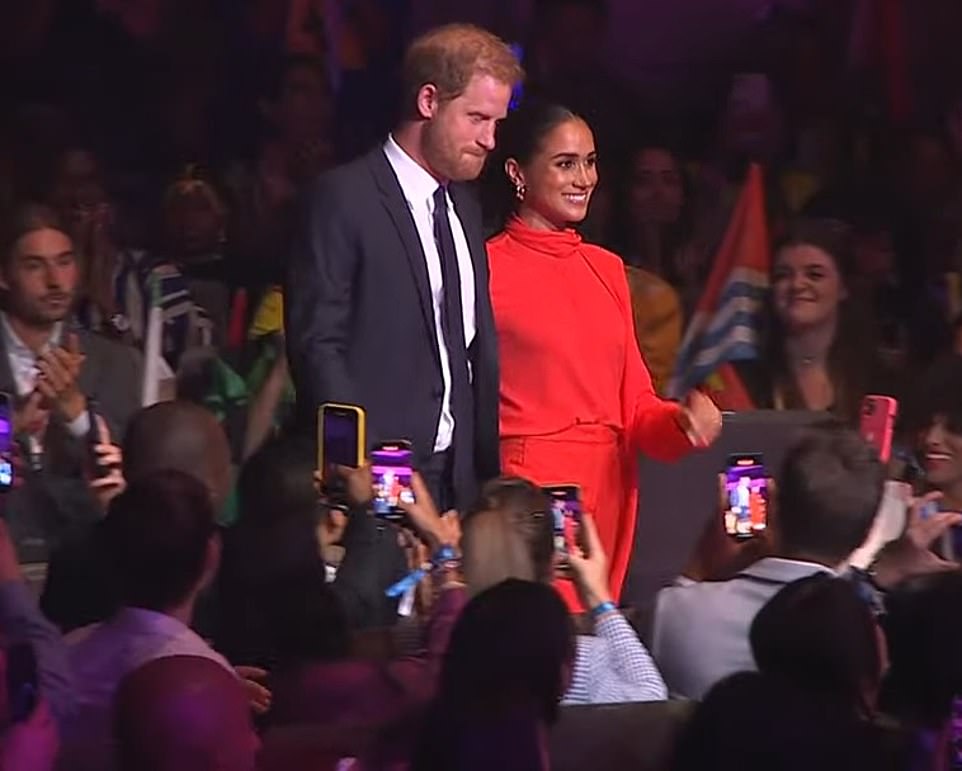 Harry and Meghan were all smiles as they walked hand-in-hand past the 2,000-strong crowd at Bridgewater Hall, filled with young people from around the world (pictured) 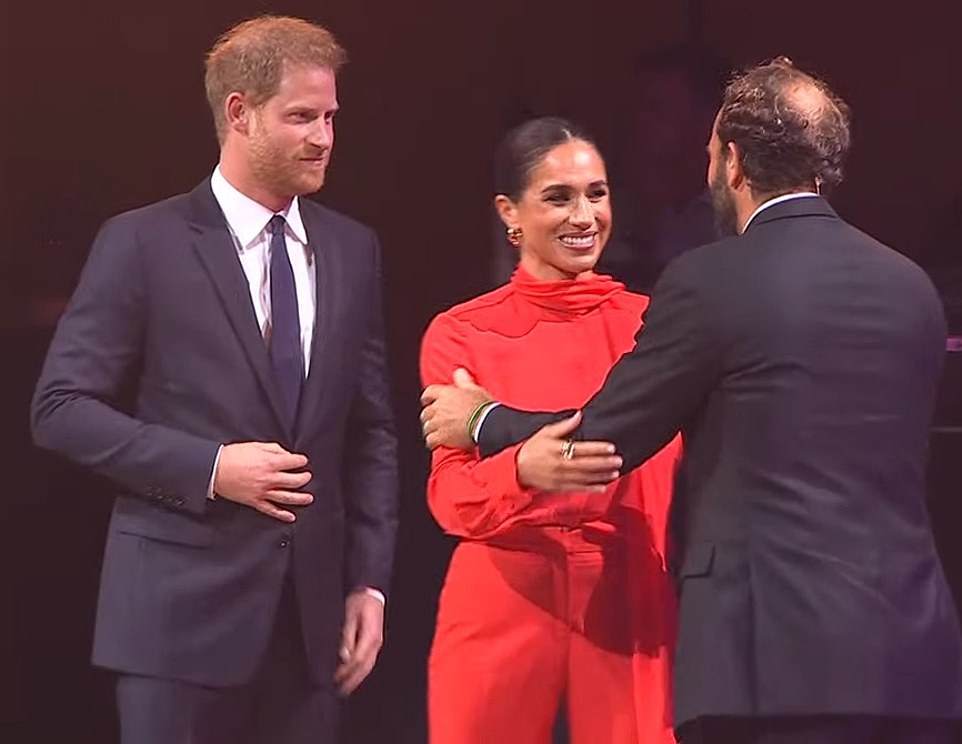 The Sussexes were accompanied by two bodyguards and followed by another Range Rover as they were driven out of the grounds of Windsor Castle, ahead of Meghan making her first speech to a British crowd since Megxit.

They had spent the night less than half a mile from Prince William, Kate and their three children – but the families are not expected to meet, in a decision that underlines the deep rift between the brothers.

Meanwhile, the couple’s decision to use at least two private security firms and dog teams to form a ring of steel around Bridgewater Hall comes just days after Meghan told The Cut magazine in the US that it takes ‘a lot of effort’ to forgive and hinted that she can ‘say anything’, in what has been translated as a veiled threat to the Royal Family.

The area outside the 2,300-seat venue was cleared of the public an hour and a half before the couple arrived after 6pm, it was reported.

It is understood the couple and event organisers have arranged private security after Harry was told he was no longer entitled to taxpayer-funded official armed police bodyguards. A spokesman for Greater Manchester Police confirmed its officers were not involved, adding that security for the event had been ‘privately sourced’. 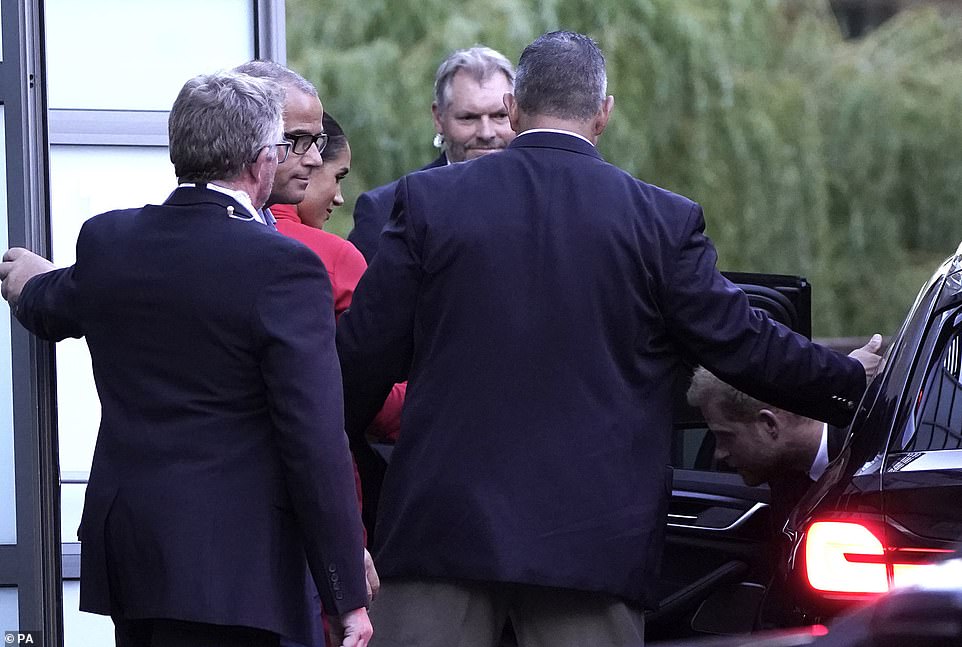 Harry is suing the Home Office, claiming that the removal of his taxpayer-funded armed police protection bodyguards since they quit as frontline royals is ‘unfair’, ‘illegal’ and puts his family at risk.

Next stop for the couple is Germany for the Invictus Games Dusseldorf 2023 One Year To Go event which is taking place on Tuesday, before they return to the UK for the WellChild Awards in London where Harry will speak on Thursday.

Today it emerged that Prince William has ‘no plans’ to see his younger brother Prince Harry until after the California-based royal releases his bombshell memoir this winter, even though the pair are currently staying around 380ft apart, as the crow flies, from each other in Windsor.

Where will Harry and Meghan visit on their European tour?

The Sussexes are travelling to Manchester on Monday where Meghan, 41, is due to give a speech on gender equality. The summit brings together young leaders from more than 190 countries.

The area around Bridgewater Hall, which is hosting the summit, will be cleared for 90 minutes ahead of the couple’s arrival, The Times reports.

However, Harry and Meghan have asked private security firms to provide a ‘ring of steel’ in Manchester for their appearance at the forum.

The event runs from 6pm to 8pm.

After Monday’s trip to Manchester, the Sussexes will travel to Dusseldorf on Tuesday to mark a year before Harry’s next Invictus Games.

Harry previously announced the sixth games would be held in September 2023. He and Meghan attended the 2022 Invictus Games last April in the Netherlands.

The Sussexes have no official plans on Wednesday. They have not said whether they intend to visit with the Queen who is at Balmoral in Scotland.

The couple will return to Britain for the WellChild Awards ceremony in London on Thursday, where Harry will deliver a speech.

The WellChild Awards looks to ‘celebrate the inspirational qualities of the UK’s seriously ill children and young people, along with those who go that extra mile to make a difference to their lives.’

William, 40, and his wife, Kate Middleton, are said to be avoiding contact with the Duke and Duchess of Sussex until they know what the couple plans to disclose in their Netflix documentary and Harry’s forthcoming book.

‘They have lost their chance of being trusted as the chance is they will record any conversation and use it against them,’ Royal biographer Angela Levin told The Sun.

Levin alleged William does not have faith that Harry, 37, will not repeat their conversations. The author said William’s hesitance to interact with the Sussexes is their ‘own fault for vastly exaggerating and being rude.’

Harry and Meghan, 41, are believed to have arrived at Frogmore Cottage in Windsor on Saturday ahead of their European tour. The property is located just 380 feet away from the Cambridges’ new four-bedroom Adelaide Cottage, where William and Kate spent the weekend with their children.

The insiders told The Mirror that Charles had thought the Sussexes staying with Prince Charles would be a ‘good opportunity for everyone to take stock and relax.’

‘But the invitation was declined, as it has been before,’ the source said, adding that Charles hasn’t ‘wavered’ on his attempts to have a relationship with his son ‘despite the attacks which seem to be coming with increased vigour.’

News of the declined invitation surfaced after Charles, 73, was pictured heading to church in Balmoral alone Sunday morning. Insiders allege he continues to find Harry and Meghan’s jibes at the Royal Family ‘painful’ and is ‘completely bewildered’ by their behaviour.

Harry and Meghan’s trip comes amid Harry’s ongoing legal battle with the Government over his security when in the UK. He launched legal action after he was told he would no longer be given the ‘same degree’ of personal protection after stepping back from the Royal Family in 2020.

He said he did not feel safe under current security arrangements bringing his family here and has offered to pay for British police to act as bodyguards himself. Last month, he won a bid to bring a High Court claim against the Home Office.

The Prince of Wales, who was pictured arriving alone at church in Balmoral on Sunday morning, is said to have been wounded by the words and actions of his son and daughter-in-law and is likely fearing further attacks this week.

A friend of the prince said Charles was ‘completely bewildered about why his son, whom he loves deeply, feels this is the way to go about managing family relationships’.

Insiders say the 73-year-old ‘loves and misses’ Harry, Meghan and his grandchildren, Archie and Lilibet, and feels particularly hurt after spending time with them during the Platinum Jubilee in June.

Charles is thought to have seen their time together as a ‘minor act of reparation’ after the Sussex’s bombshell interview with Oprah Winfrey in 2021 which saw Harry say he felt ‘really let down’ by his father.

Meantime, the Queen is said to be keeping calm and carrying on, but a source told The Sunday Times she did not want to be ‘on tenterhooks’ all the time waiting for the ‘next nuclear bomb’ from the Sussexes.

Another Palace source told the newspaper: ‘Ultimately, they are bashing the institution that has put them in the position they’re in – the longevity of that strategy is not sustainable.’

Harry and Meghan have taken part in several interviews since their departure from royal life, including their controversial sit-down with Oprah during which they accused the Royal Family of racism and said the institution failed to help a suicidal Meghan.

Tensions were raised further last week after an interview which saw Meghan suggest the Sussexes had been forced to move across the Atlantic because ‘by existing, we were upsetting the dynamic of the hierarchy’.

Speaking to US magazine The Cut, she also claimed her husband had ‘lost’ his father, with sources close to the couple saying this wasn’t a reference to Prince Charles, but her estrangement with her own father.

Royal insiders have branded the interview, which also saw Meghan compare herself to Nelson Mandela, as ‘delusional’ and have expressed concerns about the impact of their comments on the Queen.

One said that the Queen, who is now 96 and has pulled out of a string of public events in recent months amid ongoing fears for her health, does not ‘want to be on tenterhooks’ and constantly waiting for the ‘next nuclear bomb’.

Analysts allege Harry’s upcoming memoir, which is expected to be out in time for the Thanksgiving and Christmas holidays, is also expected to slam the monarchy.

The contents of the tell-all memoir still remain a mystery, including to the Royal family who will get to read the book at the same time as the public.

Sources close to the Prince of Wales reportedly told The Telegraph last month that he had hoped his team would have been sent a copy of the book ahead of its publication. However, they claim neither he nor the Duke of Cambridge – or their attorneys – have received specifics about the book.