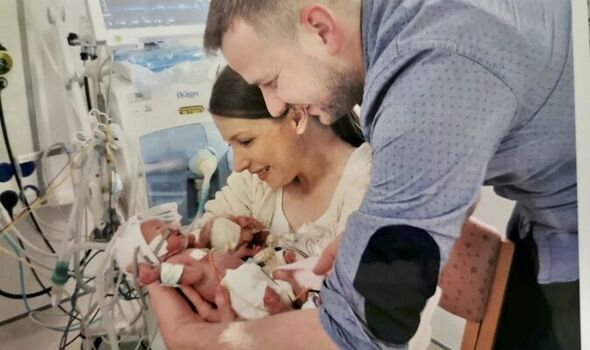 It was touch and go for Ionela Majdik’s babies as they were born prematurely and one was even visited by a priest when doctors said she would not survive the night. Yet after 95 days in hospital, Adam and Anja were finally strong enough to be allowed home with their delighted parents. Nurse Ionela, 37, said: “I can’t believe that after having two transplants I managed to have twins like this. It seems like a miracle.”

Doctors say they have never come across a woman who has had two such operations and then given birth to naturally conceived twins.

Ionela had her first transplant in 2009 after being born with abnormally small kidneys.

The condition was diagnosed when she was seven and for seven years she had kidney dialysis – where a machine cleans the blood – before a donor was found for her.

She said: “The transplant was a success, but after four years it failed. I had to go back on the transplant list.

“At that point, I asked the doctors if it was going to be possible for me to have a baby one day, and they told me ‘No’. I was devastated as I loved children.”

“Ionela had her second kidney transplant in August 2016 and made a good recovery. Then three years after that, shee and husband Vasile, a mobile phone shop manager, made the amazing discovery she had fallen pregnant.

She said: “I was scared because it was risky.”

When she was 23 weeks pregnant, doctors found there was restricted blood supply to one twin and she was not getting enough oxygen and nutrients, which was life-threatening.

Ionela had developed the condition pre-eclampsia, where the baby does not get enough blood through the placenta. The decision was made to t deliver the twins two weeks later in 2019. They were born by Caesarean section with Adam weighing 1Ib 9oz and Anja at 1Ib 3oz. At nine days old, doctors told the couple Anja was not going to live.

Ionela, who is from Dublin, said: “We called a priest but she amazed us all and hung on.

“Both twins had breathing problems and had to be on oxygen but they got stronger. Doctors told us that

Anja would have disabilities but she developed normally and hit her milestones.”

Adam was allowed home at the end of January 2020 and Anja a couple of weeks later.

Now two, they have been regularly monitored but were finally discharged from hospital care last month.

Ionela added: “They are perfectly healthy and both can count to ten and recite the alphabet.We are so proud.”

Ionela added: “I’m so grateful to my donors. My babies are only in this world because of their amazing gifts. I’m living a normal life and being a mum. It’s the best feeling.”