Martin Lewis' consumer site has put together a round-up of when it expects retailers to drop prices in the days before Christmas, based on nine years' worth of analysis. 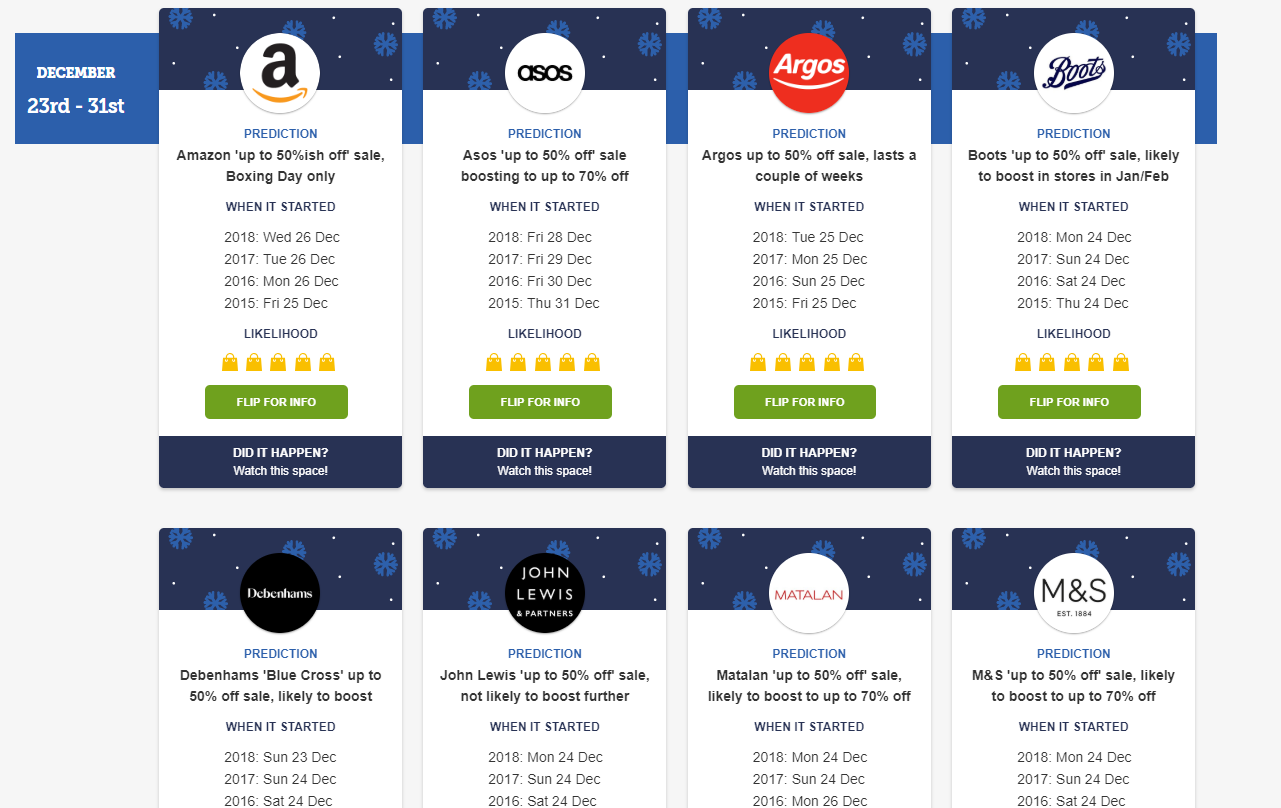 And it turns out that the best deals are reserved for last-minute shoppers, with many retailers dropping their prices in the final few days before Christmas.

For the past five years, Boots has started its post-Christmas sale on December 24, according to the tool, and offers customers up to 50 per cent off.

Meanwhile, Debenhams is expected to slash prices by up to 50 per cent on Christmas Eve too, although last year it dropped prices online a day early on December 23.

The retailer's "Blue Cross Sale" launched in stores on Boxing Day and price drops were boosted in January by up to 70 per cent.

Our tips for finding the best deals in the festive sales

IT might be tempting to dive in and snap up LOADS of items in the Christmas sales but here’s how you can guarantee you’re getting a good deal.

PREPARE Research the items you want to buy and find out the cheapest price. Websites like PriceSpy, PriceHistory and CamelCamelCamel will give you historical data on prices so you can see how much you should pay.

EARN CASHBACK Check websites like Quidco and TopCashback BEFORE you place your order. Cashback websites PAY you to shop. All you have to do is click through their links and the money is added to your online account, usually within 14 days.

CHECK FOR CODES Take a look at The Sun Vouchers, and see if you can get extra savings with discount codes.

The consumer site predicts that Next's "at least 50 per cent off" sale will also launch on December 24, as well as half price off John Lewis and Marks & Spencer launching the same day.

Amazon isn't expected to launch its Christmas sales until Boxing Day, the same as it has done for the past three years.

MSE predicts shoppers will be able to bag up to 50 per cent off some products, but the retailer is actually already running a fortnight of deals to help out last minute gift-buyers.

The consumer site also reckons the sales are likely to get even better in January and February.

Last year, we reported how Boots offered up to 70 per cent off – but it launched the deals two weeks later than expected.

While Argos isn't likely to cut prices until Christmas Day, whereas ASOS won't launch its up to half price sale until December 28.

In previous years, Argos has halved the price of a Slumberdown double duvet and a George Foreman grill.

You can see the full list of MSE's Christmas deals predictions on its website and find out more information by clicking on the cards to flip them over.

Of course, these are predictions and even though they're based on almost a decade's worth of previous sales, there's no guarantee they're accurate.

It's worth keeping an eye out in the days leading up to the estimated sales dates to avoid missing out.

But just because a product is in the sale, it doesn't mean that it's a good deal – you should compare prices before parting with your cash.

PriceSpy logs the history of how much something costs from over 3,000 different retailers, while Idealo lets you compare prices between retailers, and CamelCamelCamel reveals previous Amazon prices.