Morrison government is damned either way on Djokovic

No matter what the federal government does next on Novak Djokovic, Scott Morrison will face legitimate criticism. But if “rules are rules”, as the Prime Minister last week declared, then the tennis star’s visa should be cancelled. 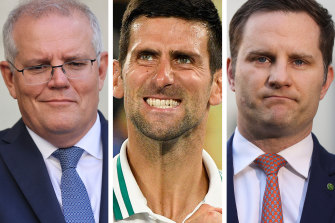 If he does decide to use his personal power under the Migration Act to cancel the visa, it will likely come off as heavy-handed to many Australians. They could hold the view that Djokovic successfully challenged the Border Force’s cancellation of the visa on arrival, and he should now be left alone to compete in the Australian Open.

The government may decide to cut its losses and move on, pointing to the Federal Circuit Court’s decision as evidence that they did everything they could.

But the court never considered the substantive question: was the Morrison government correct in asserting that prior infection to COVID-19 in the past six months is not a valid exemption to being unvaccinated? The visa was reinstated on grounds of procedural fairness because a Border Force officer did not afford Djokovic enough time to contact his lawyers.

The court did not consider whether, if he had been afforded that time, Djokovic would have been able to present valid evidence of an exemption.

On the substantive question, the current rules appear to be plain as day. The Australian Immunisation Register form that Border Force relied upon states: “A previous infection is not a contraindication to immunisation against that same disease”.

The Australian Technical Advisory Group on Immunisation (ATAGI) advice on exemptions states that people who have tested positive “can start their vaccination course, or complete the second dose, if they have already had a first dose prior to being infected by SARS-CoV-2 as soon as they have recovered from the symptomatic infection”.

Considering that Djokovic at worst only experienced mild symptoms after testing positive on December 16, the federal government argued he had weeks to begin vaccination.

In theory, allowing Djokovic to remain in the country does not create a precedent for unvaccinated foreign nationals to freely enter Australia. This is because Djokovic only won the case on procedural fairness.

But if Hawke doesn’t use his power to cancel the visa, Morrison will face the absurd proposition of allowing someone to freely walk around that he has declared should have never been allowed into the country under current rules.

“People are welcome in Australia. But if you’re not double vaccinated and you’re not an Australian resident or citizen, well, you can’t come,” the Prime Minister said on January 6.

Maverick Nationals MP George Christensen is using the court judgment as the basis to argue all vaccine mandates should be scrapped.

So while there are no precedents in theory, the government will send a terrible message if it doesn’t follow through on its public statements.

For a party that prides itself on being in control of the nation’s borders, it would be an embarrassment for the Coalition.