Prime Minister Scott Morrison has dismissed calls from other Liberals to dump his controversial captain’s pick candidate for Warringah, insisting he will not allow Katherine Deves to be “silenced” for her views on transgender women’s participation in women’s sport.

As concerns grew about the impact of Deves’ candidacy in nearby seats where “moderate Liberals” are under threat, Morrison appeared to kill off any prospect of Deves being disendorsed, leaping to her defence as “a woman standing up for women and girls”. 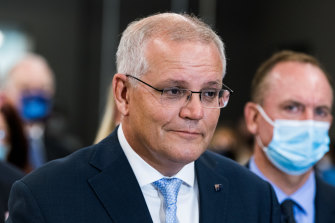 Prime Minister Scott Morrison said he would not allow Katherine Deves to be silenced and she would make a great MP.Credit:James Brickwood

“I’ll stand up with her. My team is standing up with her, and we will make sure that she won’t be silenced. I know there are plenty of people who would like to do that.”

Deves was due to attend a community forum in Manly on Tuesday night alongside Warringah MP Zali Steggall and other candidates, but disappointed event organisers confirmed she had withdrawn. It came after she hid from journalists at a fundraiser on Monday.

Three state Liberal MPs spoke out against Deves on Wednesday, as well as federal MP Trent Zimmerman, who told the Herald and The Age he was “angry and disappointed” about her comments but acknowledged she would be the Liberal candidate. 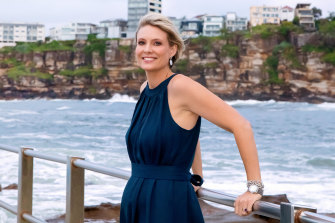 Katherine Deves has apologised for the language she used in her commentary but stood by her position.

NSW Treasurer and moderate faction leader Matt Kean warned Deves’ views would hurt Liberals in nearby seats such as North Sydney, where Zimmerman is being challenged by independent Kylea Tink, and Wentworth, where Dave Sharma is battling Allegra Spender.

Kean said he did not believe Deves’ selection was a deliberate strategy to appeal to voters who might be receptive to her arguments; rather, he said it was a failure of the party’s vetting procedure.

Another Liberal source warned the issue would remain a liability for the party which could be seized by independents and Labor. “It’s not going to go away. People will still talk about it,” the source said.

“What should have happened is a full and fair preselection process, including comprehensive candidate vetting, months ago to determine the Liberal candidate for Warringah,” Griffin said.

He said Deves’ comments about transgender people had “no place in political discourse, full stop”. Voters wanted positive ideas about healthcare, the environment and the economy, he said. “The quicker all candidates focus on that, the better.”

Wilson said she was “being asked to vote for someone who is using equality for women as a thin veil to disguise offensive attacks on transgender people – a group of people clamouring for their own safety and opportunity”. She said it was not too late for the party to choose someone else.

Nominations close on Thursday, after which Deves’ name will be on the ballot paper as a Liberal even if she is later dumped. But Morrison gave a strong sign on Tuesday that would not occur.

“She will make a great member of parliament,” the prime minister said. “I think she has learned from her advocacy in her private life the better way to do things … I don’t think she should be silenced because she has views that don’t agree with others.”

Deves has been under fire for several comments she has made during her campaign to exclude trans women from participating in women’s sport, such as comparing court decisions to Nazi grudge trials or the stolen generations, and calling Wear It Purple Day a “grooming tactic”.

She has apologised for her language but said she remained committed to her fight for women and girls in sport.