Mother who conceived triplet girls without IVF reveals running the house is like a ‘military operation’ and her daughters are fed, bathed and dressed in the same order – and admits she uses hospital bands to tell them apart

A mother who defied the odds to conceive triplets without IVF has revealed running the house is like a ‘military operation’.

Hayley Wilkie, 35, and husband Chris, 36, from Redditch, Worcestershire, were already parents to daughter Luna, four, when they welcomed triplet girls Polly, Ivy and Vivi on April 16.

The couple, who spent £3,000 on new furniture ahead of the triplets’ arrival, said they rely on a strict routine to keep the household organised and admitted they still use the hospital bands around the girls’ ankles to help tell them apart.

Polly and Ivy, who shared a placenta, are identical but Hayley and Chris have to wait until the trio are old enough for tests to find out whether Vivi, who had a separate placenta, is also identical. 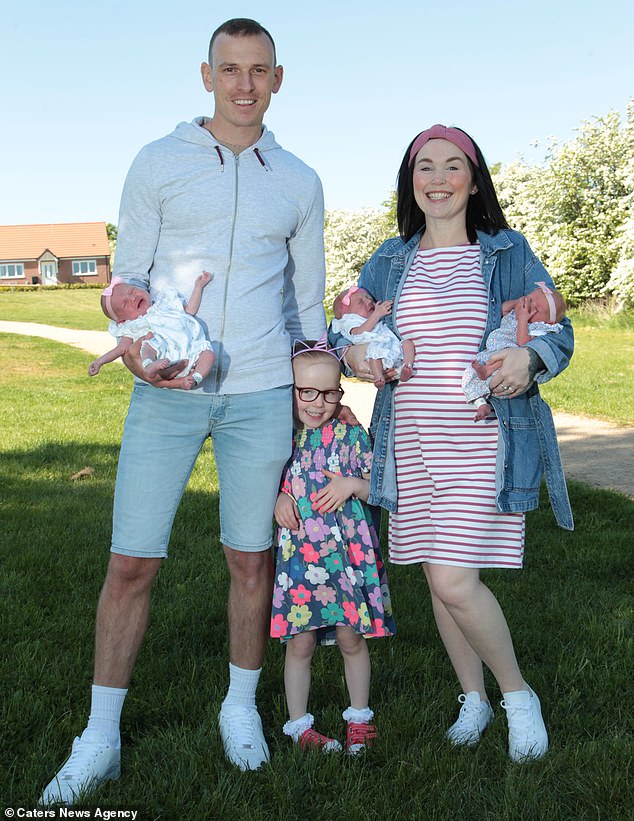 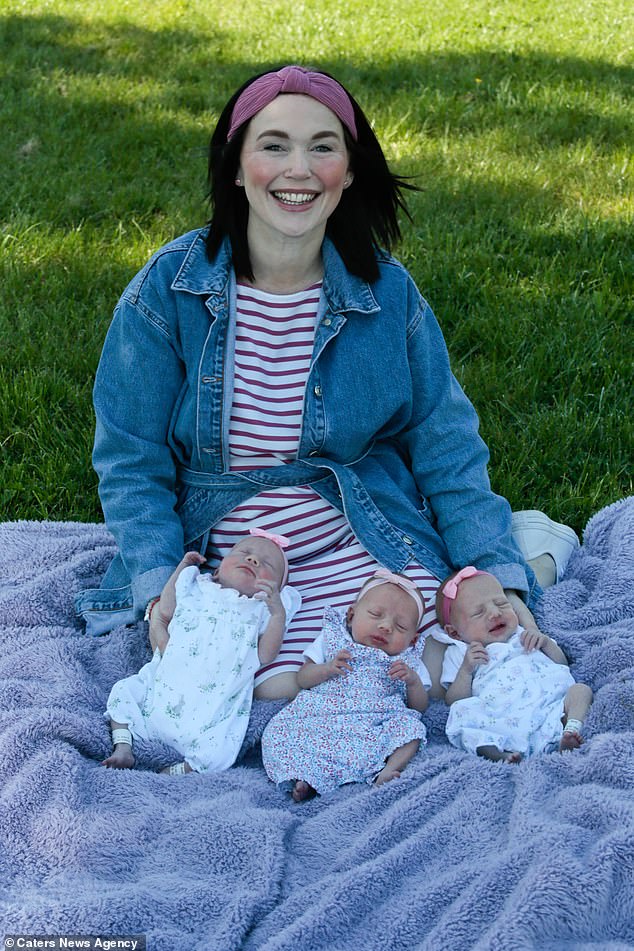 ‘We still haven’t taken off the hospital bands because we can’t tell them apart,’ Hayley said./

‘My friend has made us little colour-coded waterproof bands that the triplets will wear in a couple of weeks, a yellow, a pink and a purple. Until the bands come off we have colour-coded hats.’

Speaking about their military routine, Hayley said: ‘We always put them in the same order, when we dress them, when we bathe them, when we put them to bed, like a squad.

‘As far as we’ve been told, Polly and Ivy are definitely identical because they shared a placenta, but until we can get blood tests done, we don’t know for sure whether Vivi is from the same egg or a different one.

‘We won’t know until they are a bit older and they’ll be able to get blood tests done to show if they are all identical.

‘One of the consultants at the hospital told me they could still be identical even if only two were sharing a placenta. To have identical triplets, born at 34 weeks is extremely rare but we got there.’

The couple found out they were expecting an addition to their family last September. Hayley added: ‘We were suspecting there would be more than one because of how poorly I was’

The couple found out they were expecting an addition to their family last September – just one month after Hayley had her implant removed.

Hayley continued: ‘We were suspecting there would be more than one because of how poorly I was and how my tummy just went from nothing to quite a big bump.

‘We had our first scan in September and they said ‘twins’ straight away.’

Hayley revealed how it was Chris who spotted their third daughter during a routine scan and revealed how their daughter Luna was shocked at the prospect of three sisters.

She said: ‘My husband looked at me and nudged me saying, ‘what’s that’, like he had seen something else. 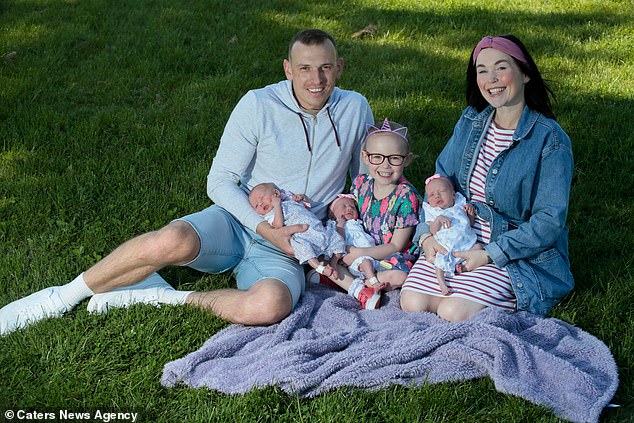 ‘I just said, ‘no, it’s nothing’ and ignored it but then I looked properly and asked: ‘What’s that?

‘We were told: ‘That would be baby number three’. At that point I just said: ‘You can stop counting now.’

Hayley continued: ‘We were in shock, we didn’t really speak about it for a couple of days, we just kept saying: ‘Three, not even twins, but three?’

‘We were so confused but we managed to calm down and have a conversation. 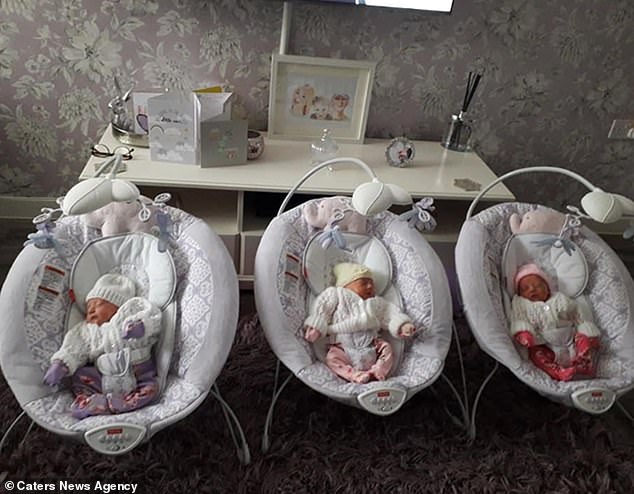 Left to right: Triplets Ivy, Vivi, Polly. The family waiting on tests to confirm if their triplets are identical – which make up just one in 200 million pregnancies

‘When we told Luna she was a little bit in shock, she said: ‘Three babies mummy?

‘She loved them the moment we told her, she’s amazing.’

Speaking about the birth, she added: ‘My first reaction when I saw them was that they looked so perfect, like little dolls, that’s the only way I can describe them.

‘Chris was just saying: ‘They look so big, are they meant to be this big? I think they were quite bigger than what he anticipated. 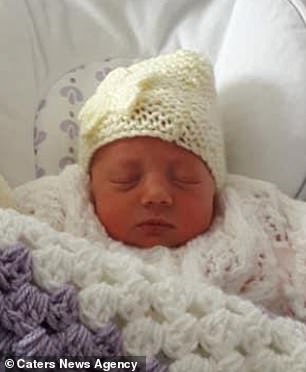 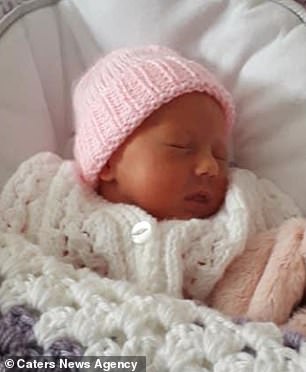 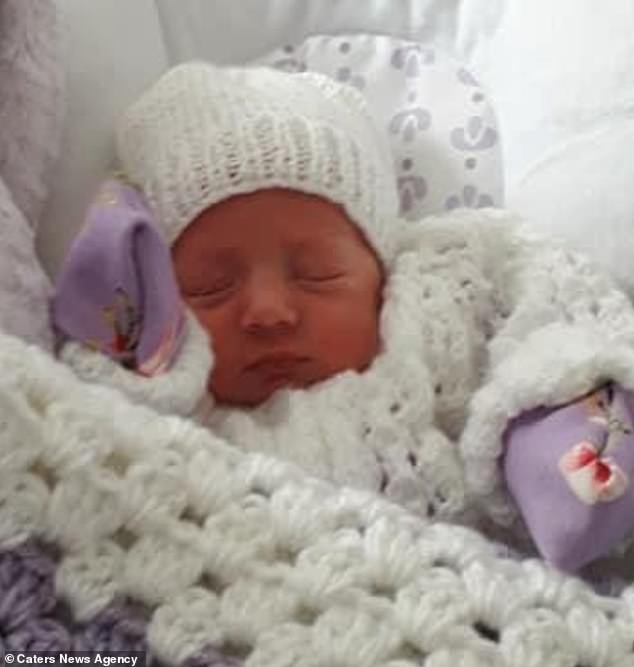 Ivy weighed 4lb 8oz. Hayley added: ‘They were all bottle feeding by the time we went home. They are all doing great, they’re really good babies, I’m very lucky’

‘They feed every four hours, we prepare everything and feed one after the other.’

She continued: ‘When we bathe them, we have all their clothes out ready, line them all up and one of us washes them and the other dresses them.

‘It’s like a military operation, between the morning feed and the second morning feed I make sure I do all the washing and cleaning up so I can have some time to spend with Luna.

‘Luna loves cuddling them, she can pick them up and she is very careful, she is a great big sister. 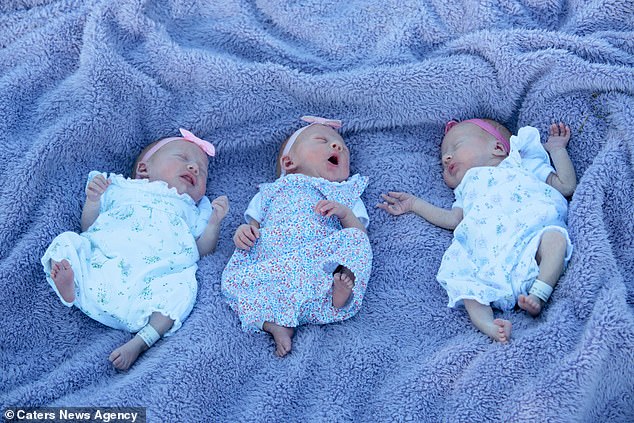 The mother revealed how their home is run like a ‘military operation’ and spoke of the need for organisation. Left to rightL: Triplets Ivy, Vivi and Polly Wilkie

‘Having three newborn infants means you have to be organised and I am so lucky to have my husband to help – I don’t know if I’d be able to do it by myself.

‘Everyone is different and every pregnancy is different but I’d advise other mums carrying triplets to try and carry on as normal as you can so you can make yourself feel a bit better because it’s so mentally draining.

‘I am quite organised and like things a certain way, you definitely need a tidy house when you have three.

‘I had everything organised way in advance because with triplets you can’t be sure when they’ll arrive.’

Shortly after the C-section, Hayley then suffered a big haemorrhage and was quickly taken to the transition care unit.

After the doctors discovered several blood clots, she was warned she might have to go back into surgery to remove the blood clots or undergo a hysterectomy.

Luckily the doctor who was attending to her made a quick decision and pulled the blood clots out herself. 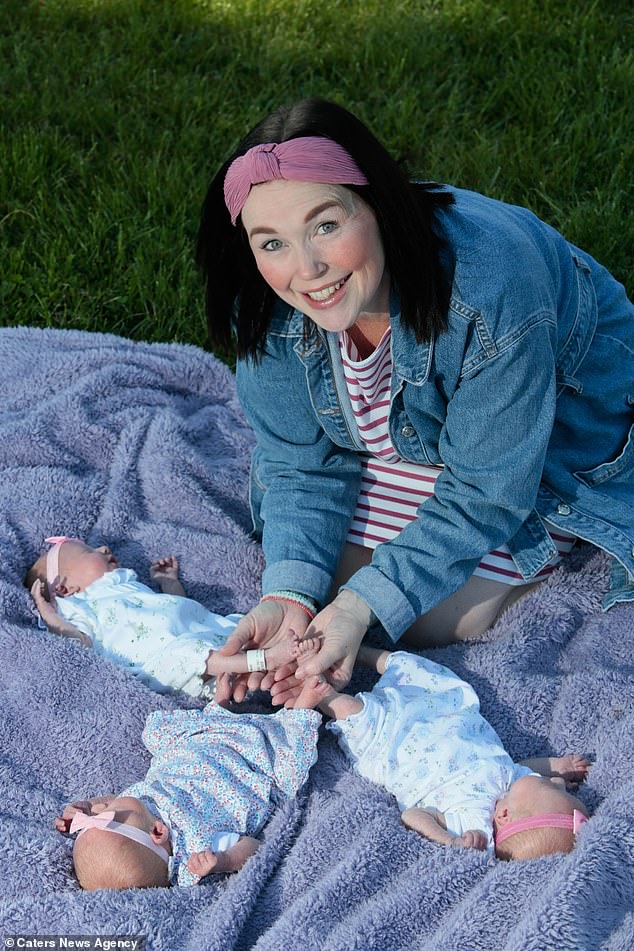 Hayley said: ‘Chris was so happy to have all of his girls back home, he feels very lucky with five women in the house’. Left to right: Ivy, Vivi and Polly Wilkie

Hayley had to remain in the transitional care unit for thirteen days and was able to go home last week.

The mother-of-four added: ‘If it wasn’t for that doctor I don’t know where I would have been, there was a risk of the blood clots going into my lungs.

‘Thanks to her I avoided a blood transfusion, hysterectomy or having to go back to surgery. 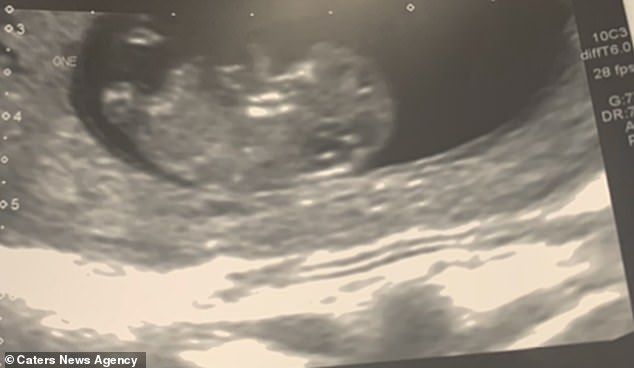 Hayley had to remain in the transitional care unit for thirteen days and was able to go home last week. Pictured: Ivy 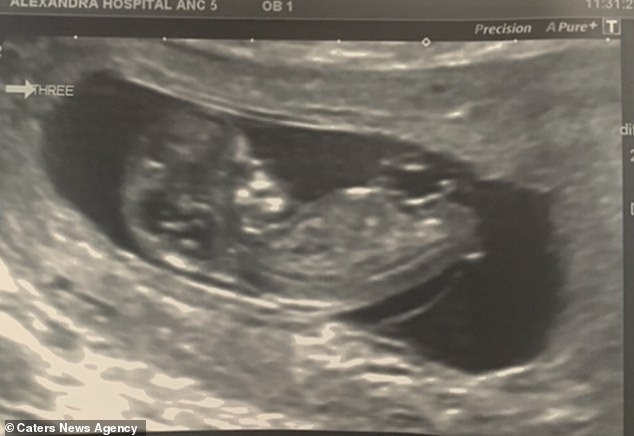 The mother-of-four said: ‘The staff were all amazing, they did everything for us, they became like family’ Pictured: Polly 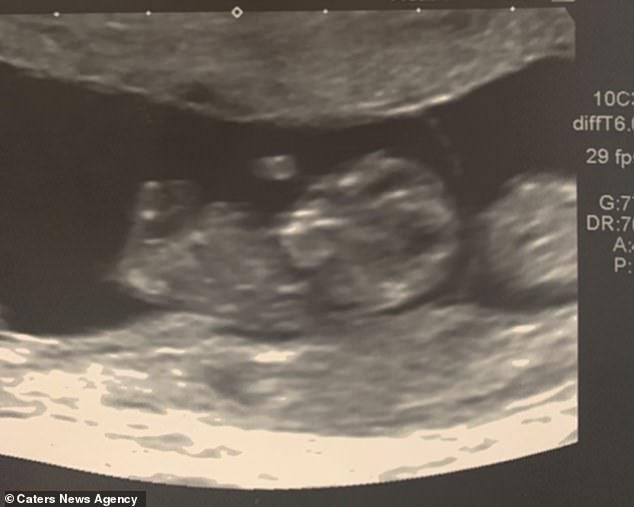 She added: ‘It was difficult having to go through all this alone, without my husband’s support- everything happened so quickly, we didn’t even get a chance to say goodbye.

‘The staff were all amazing, they did everything for us, they became like family.

‘Coming home was overwhelming, that little unit was my little bubble for 13 days.’

Hayley said the thought of her newborns coming home without a mother puts everything into perspective and added how she feels ‘very lucky’.

She said: ‘They were all bottle feeding by the time we went home. They are all doing great, they’re really good babies, I’m very lucky.

‘Chris was so happy to have all of his girls back home, he feels very lucky with five women in the house’