An obese mother and son reveal they shed a combined 15st after joining the same slimming club.

Impressed by her new waistline, her 22-year-old son Dan, who weighed 20st 3lb and wore a size XXL, decided to follow into her footsteps, slimming down to a healthier 15st and size L.

As he joked with her that she was a ‘cougar’ as his friends fancied his new slimline mother, Dan decided it was time that he fought his flab too. 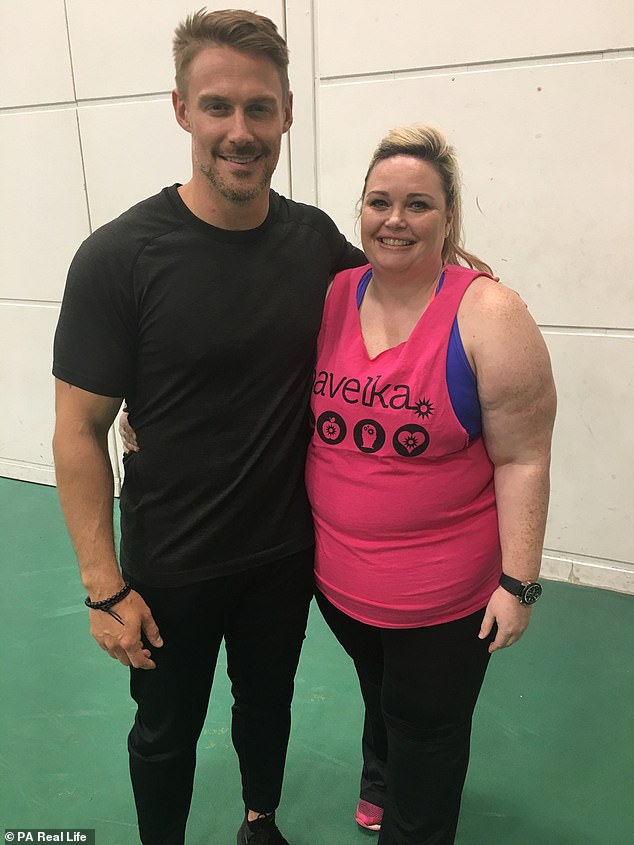 Edinburgh’s Jennifer Jeffery, 44, lost 10st in a year thanks to a healthier diet and exercise, and went from a 20st 13lb, size 24 frame to 10st 13lb and a size 10. Pictured at the gym during her weight loss journey 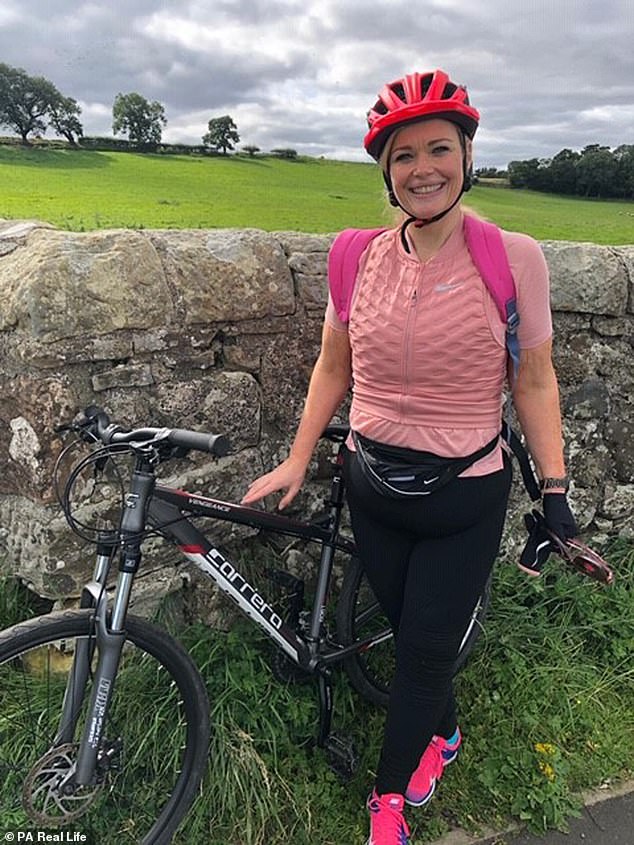 Jennifer (pictured after her weight loss) explained she felt ‘guilty’ about her weight when she tipped the scales at 20st, and decided to fight her bad eating habits 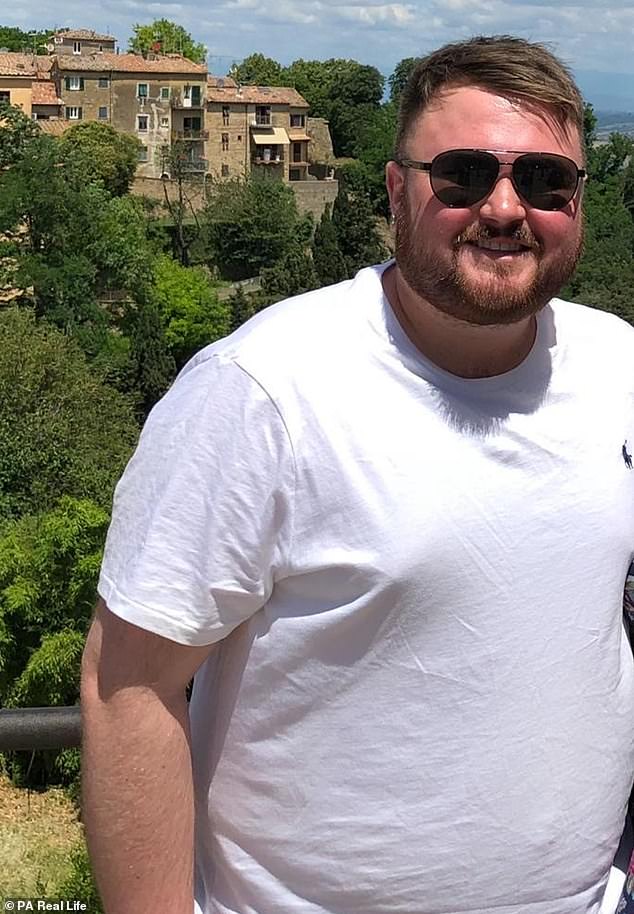 Administration worker Dan, 22, was so impressed by his mother Jennifer’s effort and slimmer waistline that he decided to give her diet a go, and went from 20st 3lb to 15st (pictured before losing the weight) 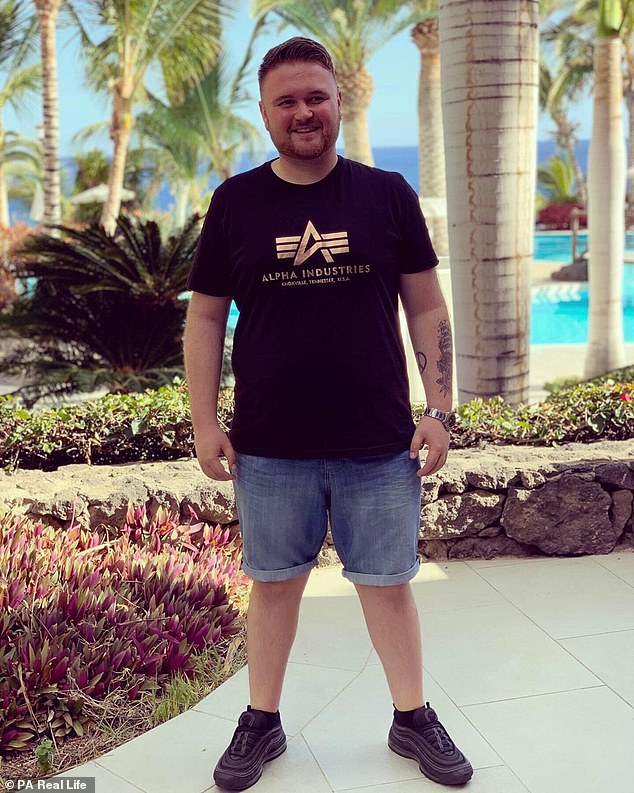 While he said he was not as ‘fitness mad’ as his mother, Dan enjoys a smaller frame, having gone from a size XXL to a size L (pictured after losing the weight)

Jennifer said: ‘The build up to Christmas is always hard, but I told myself if I don’t do this now, I never will.

‘Everyone thought I was mad eating soup and Thai green curry instead of turkey and all the trimmings, but I simply told them, “I’ve had 43 Christmas dinners in my life so far, what’s the bother in missing one?”‘

Before her diet, Jennifer had a body mass index (BMI), used as a gauge of healthy weight, of 50, compared to the NHS recommended level of between 18.5 and 25, while Daniel’s was 40.5, making them both clinically obese.

Jennifer, who is determined to preserve her newfound curves – even over the festive period – said: ‘I had Christmas dinner this year but I stuck to all the good stuff – turkey and veggies – none of the heavy carbs and rich sauces. 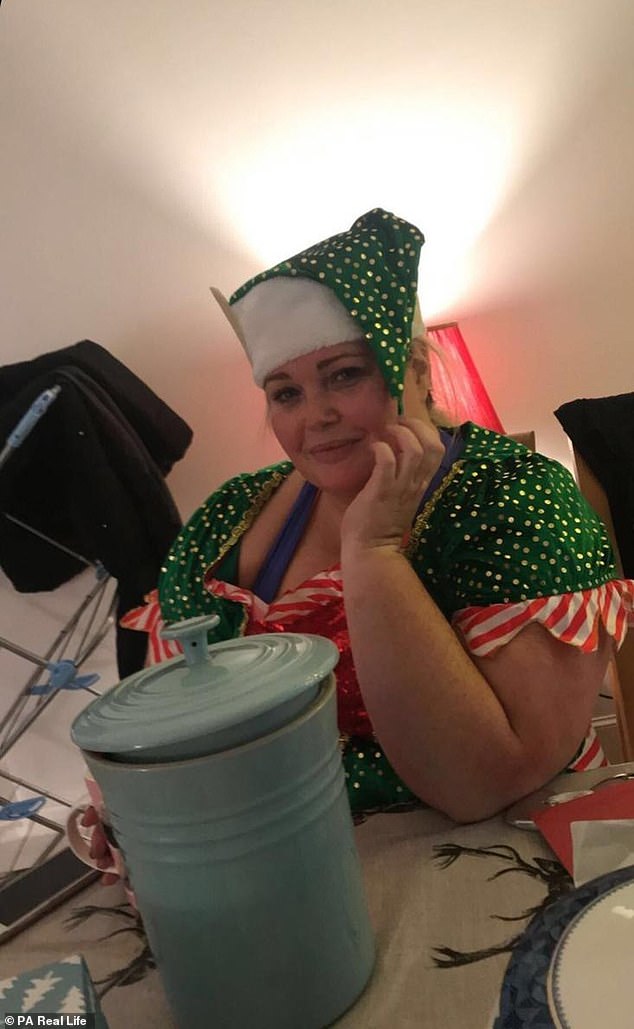 Jennifer decided to lose some weight in the run up to the holidays in 2018, and has stuck to her efforts ever since (pictured as a Christmas elf when she was still a size 24)

‘Of course it’s hard, but looking back at photos of me dressed as an elf from Christmases gone by is enough to spur me on. Just one look reminds me of how unhappy being overweight made me. I was the complete opposite to the traditional happy, bubbly elf.

‘These days when Daniel posts pictures on Snapchat or social media, he tells me his friends say how fit I look, whereas a year ago he would have been mortified by the idea of his mates fancying his mother.

‘Also, when I’m trying to decide what to wear – the last thing I want to be is mutton dressed as lamb – so Daniel chips in and becomes my personal Gok Wan, telling me yay or nay on various outfits.’ 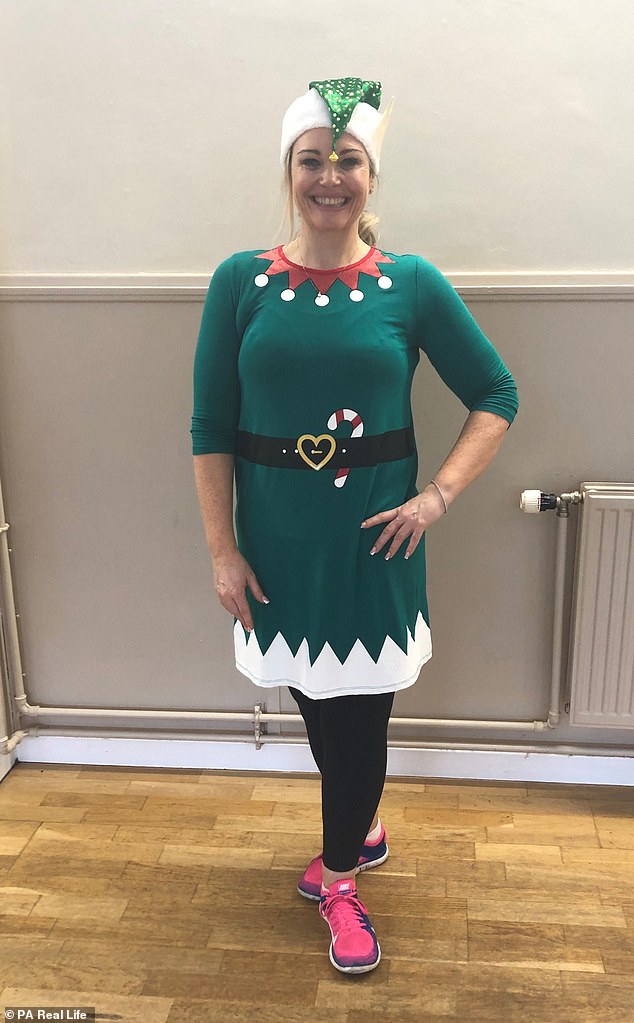 Happier about her size 10 frame, Jennifer is now the bublly Christmas elf she wanted to be (pictured). The super slimmer explained she found her weight loss ‘life changing’ 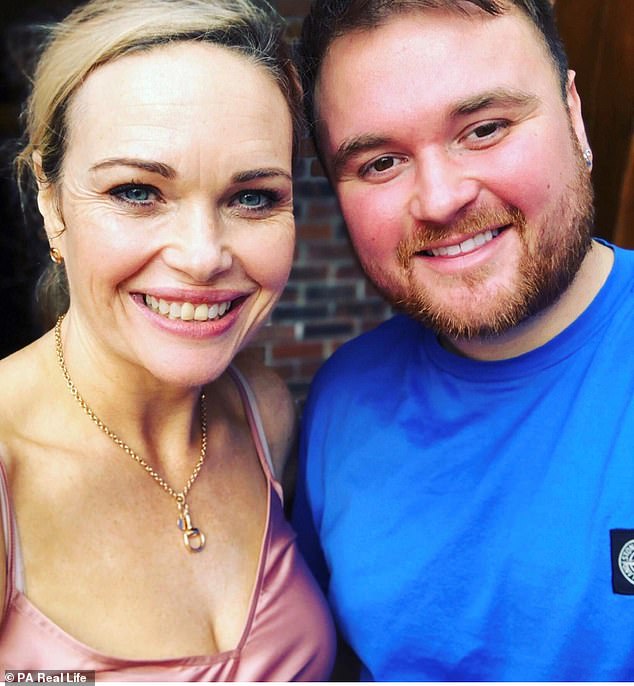 Jennifer was over the moon when her son Dan decided to join her on thew weight loss, shedding 5st (both pictured after losing the weight)

Jennifer started piling on the pounds after breaking up with Daniel’s father, who she would rather not name, in 2000.

‘I did what a lot of working single mothers do – worked as hard as possible to give my child a good upbringing, but, in the process, my own well-being took a back seat,’ she said.

Grabbing ‘quick and easy’ food that she could eat on the go or bung in the microwave for five minutes, by the time Jennifer hit 40 in 2015, she was tipping the scales at 20 stone.

Although doing her best not to pass on her bad eating habits to Daniel, by the time he was 18 and cooking for himself, it was clear he had inherited her love of fast food and carbs.

‘I’ve always had an obsession with white bread – from toast to pizzas – and that’s something Daniel definitely got from me,’ she said. 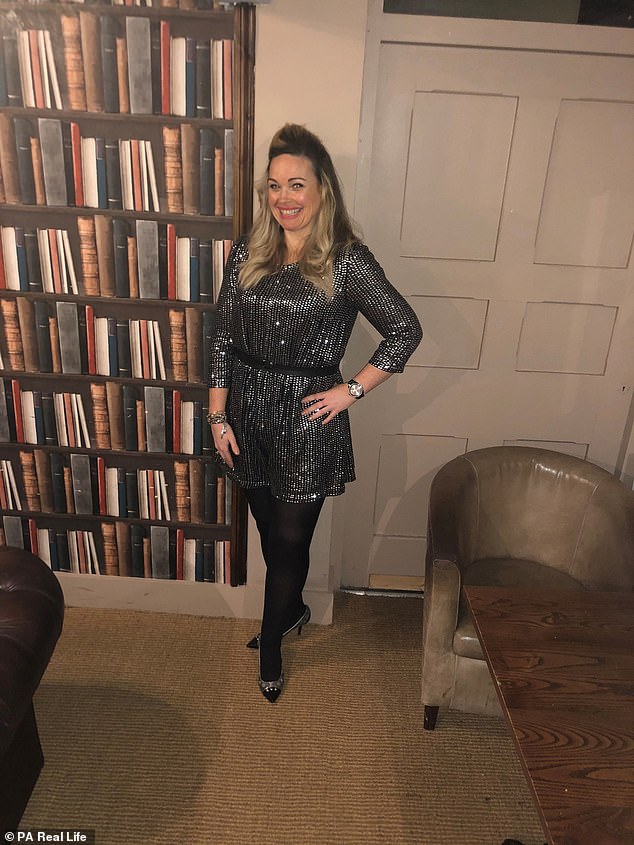 Enjoying a slimmer waistline, Jennifer is now styled by her son Dan, who joked she is now a ‘cougar’ 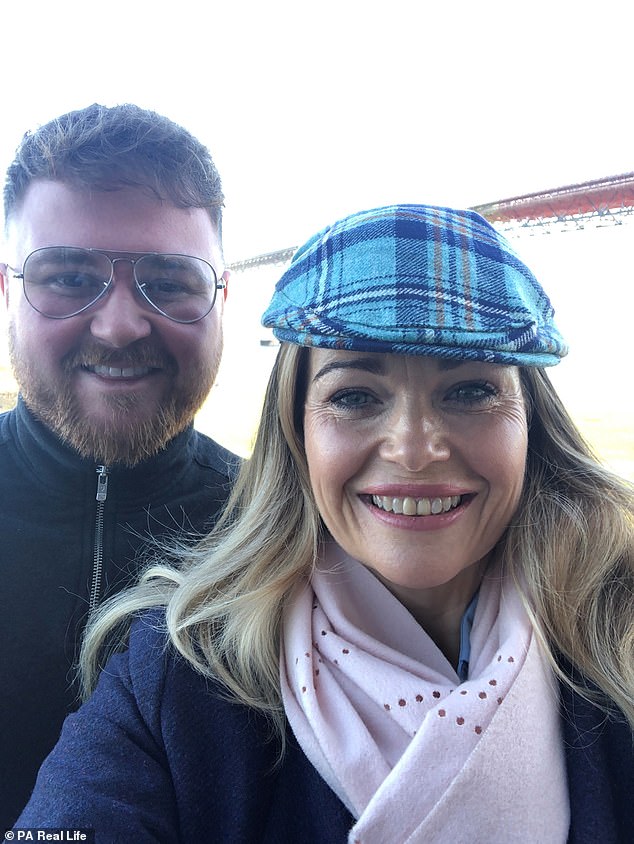 Jennifer managed to stick to her healthy eating plan during the holidays last year, which impressed her relative, including Dan (pictured after Jennifer’s weight loss)

Although Daniel, who is single, agrees that his childhood was filled with healthy food, he concedes that his mother’s penchant for calorie-laden food led to his weight gain.

Eating takeaways up to three times a week, Daniel soon found himself tipping the scales at 20 stone, too.

Then, finally, in November 2018, with Jennifer’s waistline leaving her ‘full of guilt,’ she decided enough was enough and signed up with the 1:1 Diet by Cambridge Weight Loss.

‘I was at an all-time low,’ Jennifer explained. ‘My friend and a friend’s daughter had passed away very close together and I just kept thinking to myself, “These ladies should still be alive.”

‘I was faced with this massive guilt about my own existence and it was all consuming – I hated myself because of it.

‘It was the wake-up call I needed though. It was now or never.’ 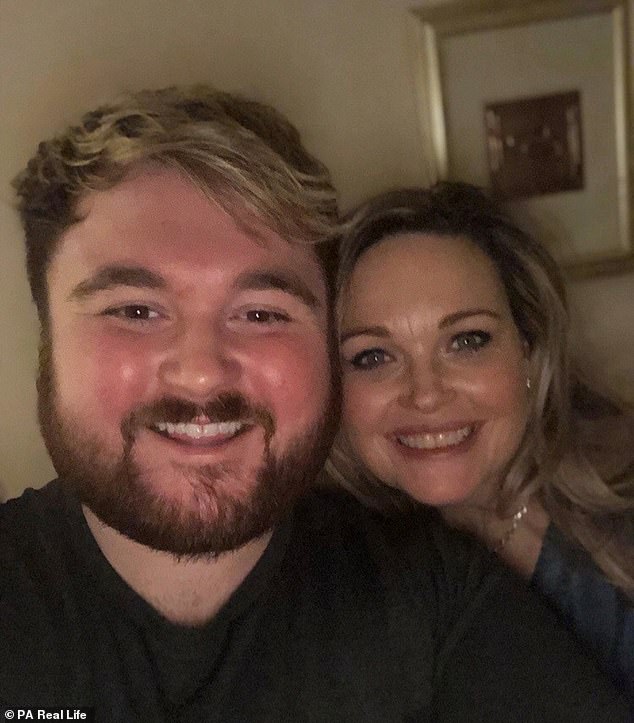 But, just a month into her weight loss journey, she was faced with the difficult task of navigating the festive season with a restricted intake of just 800 calories a day.

‘It was by no means easy – especially as I’m a very sociable person,’ she admitted.

‘I found myself having a filling meal that matched with my diet plan before going out and just ordering a cup of peppermint tea while everyone else tucked into their meals.”

Determined to stick to her plan, Jennifer even sacrificed turkey with all the trimmings at the family Christmas dinner, swapping it for soup and thai green curry.

‘Everyone around the table thought I was bonkers, but there’s more to Christmas than the food – it’s about being with friends and family,’ she added.

Her efforts paid off though and Jennifer lost an impressive 5st in as many months.

Describing the weight loss as life changing, she said: ‘What struck me the most was the freedom of movement. It felt like I’d gained so much personal space around me where the weight had disappeared. 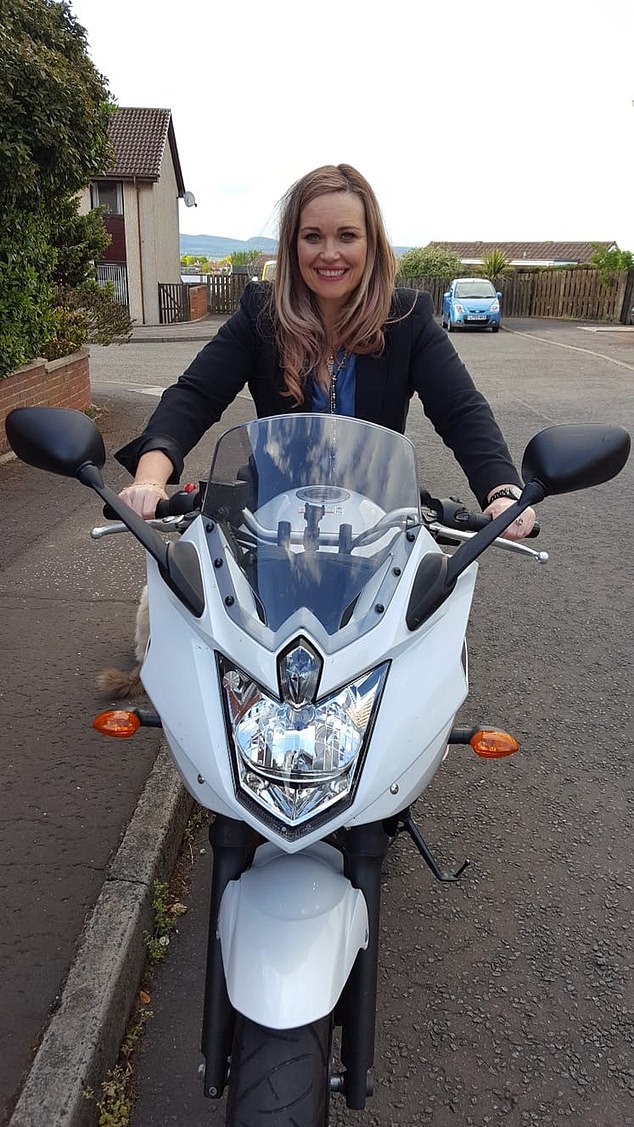 ‘Not to mention the joy of fitting into a pair of size nine Armani jeans. That felt surreal – I felt like a million dollars.’

Impressed by how much his mother’s diet had transformed her life, Daniel mooted the idea of signing up to the 1:1 diet himself – to Jennifer’s delight.

‘I did feel responsible for Daniel’s weight gain, but whenever I’d tried to talk to him about it I could see it made him uncomfortable… the want to change has got to come from within, so I left it,’ she explained.

‘The moment he asked me about signing up I was so full of pride and told him I’d help him through every stage.’

Clearing the house of ready meals, pre-packed sauces and takeaway menus, working together the mother son duo both lost a further five stone.

Jennifer’s diet before and after

Breakfast: Mountains of toast with butter

‘At first it was me coaching Daniel, making sure he had the right food in and didn’t stray from the plan, but now we both spur each other on,’ she continued.

‘It’s like he’s my cheerleader. Out of nowhere he’ll tell me how youthful and good I’m looking.’

And their shared weight loss has led to a new phase in their relationship, with Daniel boasting of his mother’s ‘cougar’ status.

‘We’ve always adored each other, but we used to live very separate lives before and now we make extra time to be together,’ Jennifer explained.

‘The other day we were out for breakfast and Daniel was sharing photos of us on Snapchat, telling me all his mates fancied me. We’ve really learnt to appreciate each other’s company in a grown-up, adult way now.’

Although Daniel has been inspired by his mother’s weight loss, he is still not ‘quite on board’ with her ‘fitness mad’ exercise regime.

‘For Daniel it’s been a lot about the weight loss and less on the exercise,’ she continued.

‘I do a 5km run every weekend without fail – even on holiday – something which Daniel thinks is mad. 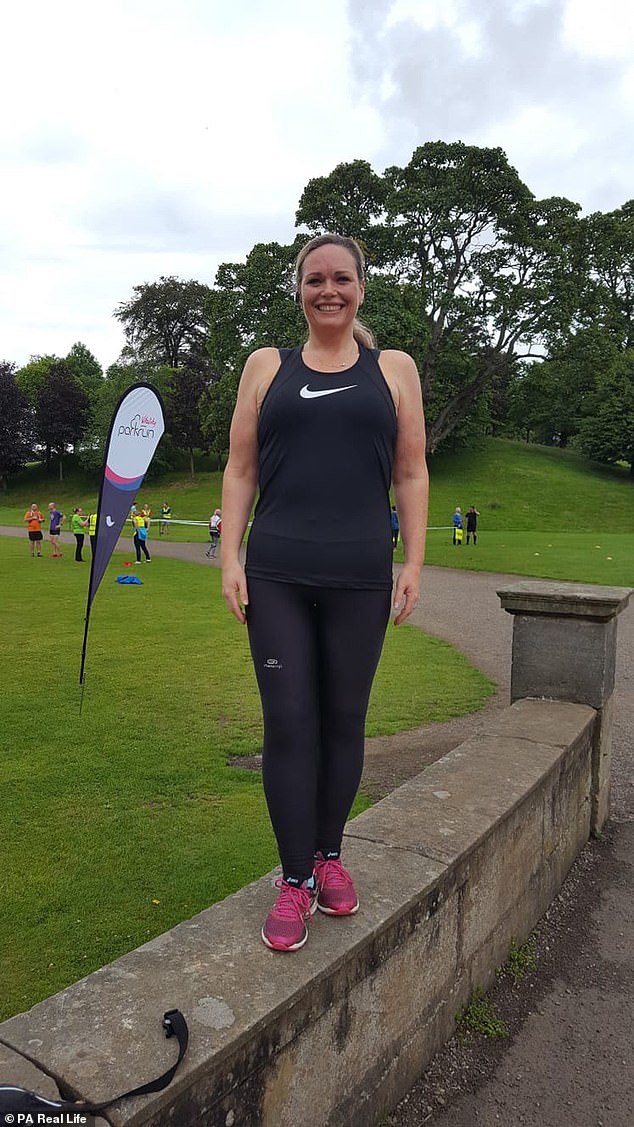 Jennifer now enjoys regular exercise. She explained losing weight together brought her and Dan closer together 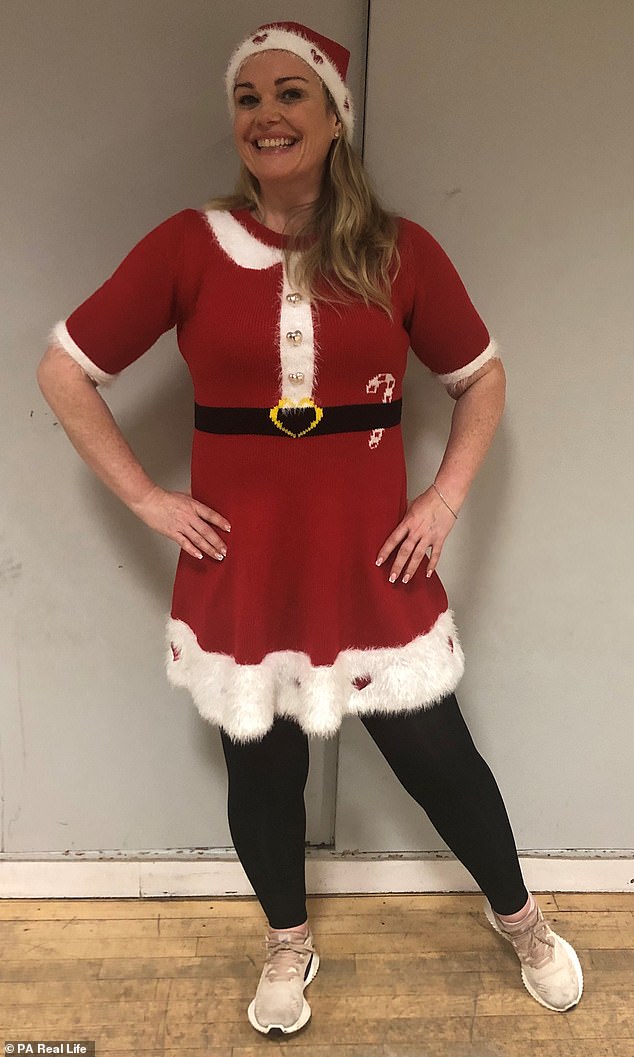 ‘I recently won the Woman of the Year at the 1:1 Diet and the prize is a trip to Seville, Spain, next February, so I’ve told Dan to get his dancing shoes ready because I don’t plan to be avoiding the dance floor!

‘And slipping into a size 10 elf outfit doesn’t feel too bad either!’

Meanwhile, Daniel gives his mother full credit for inspiring him to fight his flab.

He said: ‘I knew I’d let myself go. I could feel it when I was clothes shopping and having to go up a size, but no one really said anything and I kind of ignored it.

‘But when I saw mother’s weight loss, and all the attention she was getting, she just told me to give it a go and after one week I’d lost over eight pounds and from then on I was obsessed with the scales.

‘I don’t think either of us would have come as far as we have if we’d done this alone. We cook together and keep each other on track.

‘I don’t want to lose quite as much as mother or there’d be nothing left of me – and skipping Christmas dinner is out of the question – but if I lose a stone or two more in the New Year I’ll be chuffed.’

Daniel’s diet before and after

Lunch: Chicken and bacon sandwich with crisps and coke