Mother claims she can make £100,000 a month by embroidering clothes

Mother, 21, claims she and her partner make up to £100,000 a MONTH without leaving the house by embroidering feminist slogans on to clothing

A young couple have hit the ground running selling ‘feminist’ clothing from the comfort of their own home.

Raking in a huge £100,000 per month, without ever leaving their front room, Magda Krakowiak, 20, and her fiancé Kevin Pike, 21, say they made £22,000 in just one day after their new business went viral on TikTok.

The entrepreneurs, from Norwich, embroider ‘feminist’ slogans on clothing they buy from a wholesaler, before selling it on through their online channel.

Items include t-shirts and hoodies, with prices ranging from £20 to £38, which are made to order and take up to six weeks to dispatch. 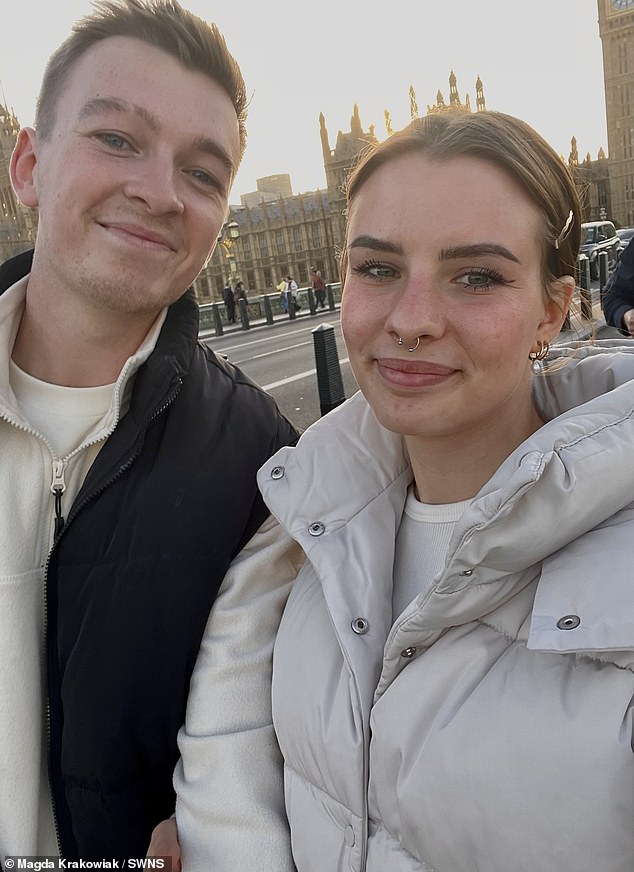 Madga Kraowiak, 20, and Kevin Pike, 21, (pictured) are earning up to £100k every month. The young couple, from Norwich, saw their feminist clothing brand go viral overnight

Slogans include ‘Abortion is healthcare’, ‘Fairy lights and reproductive rights’ and ‘Sleigh the patriarchy.’

The couple set up social media accounts for their business, Lovera Clothing, and saw sales skyrocket a few months ago when promoting their autumn range.

Magda says that their work schedule is perfect because it allows the couple to spend quality time with their two children.

She said: ‘At first we were like any other start-up business, slowly building our customer base and increasing distribution.

‘But we posted a video on our Lovera Clothing TikTok channel in August that went viral, and suddenly, we were receiving hundreds or orders a day.’ 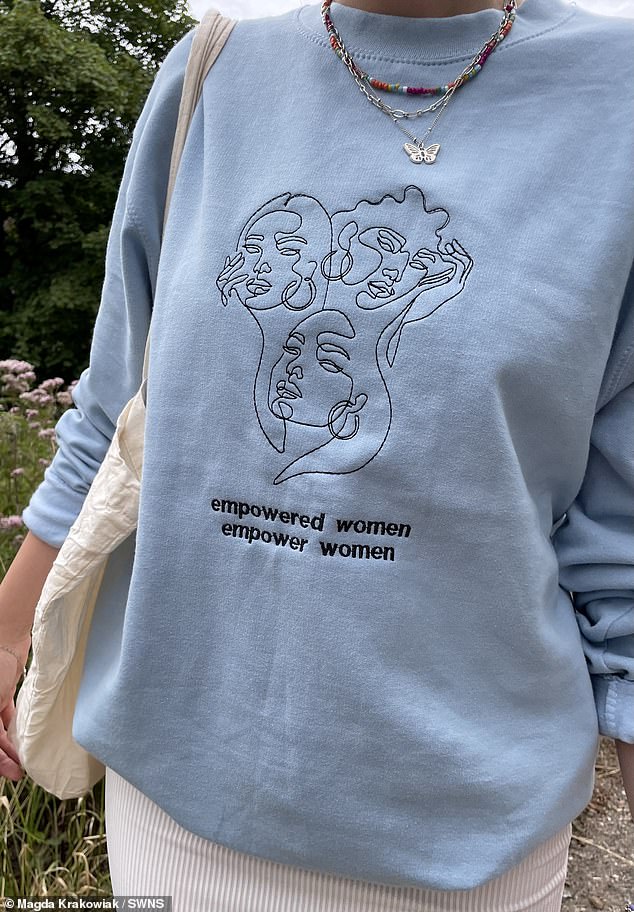 Magda and Kevin launched Lovera Clothing in April, after they identified a gap in the market for feminist clothing

Last month the young entrepreneurs surpassed £100,000 sales in just one month, all while juggling childcare.

The mother-of-two said that spending time with their two children is the most important thing.

Magda and Kevin started Lovera Clothing in April 2021, after they identified a gap in the market for feminist clothing, aimed at making people feel empowered when they get dressed for the day.

Their operation involves ordering plain hoodies, t-shirts, jumpers, bags and shorts to their home and designing them using embroidery machines.

Each item of clothing has a quote, catchphrase or illustration stitched on to it that promotes female empowerment and addresses feminist issues.

They said business was steady for the first 16 months, with enough orders coming in to allow the brand to grow.

But in late August they posted a TikTok on their channel promoting their autumn collection – which received more than two million views. 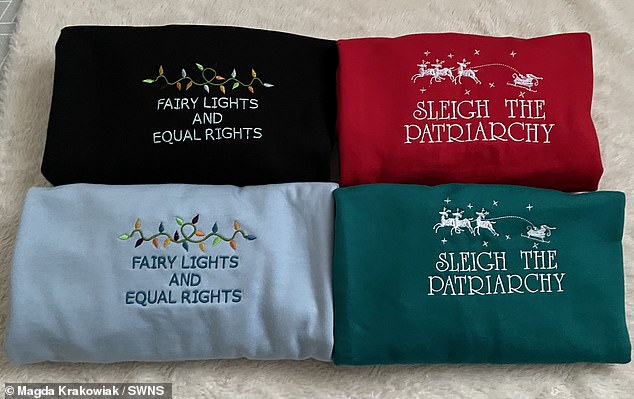 The couple buy hoodies and t-shirts from a wholesaler and embroider positive, embowered quotes on them before selling on them on their online store

They say their orders then went through the roof and the couple recorded £22,000 worth of sales in just one day.

Magda said: ‘We were promoting our autumn collection – just like we had done for all our other seasonal ranges – and suddenly the likes started pouring in.

‘We checked our shop’s TikTok channel and our post had gone viral overnight, amassing millions of views. 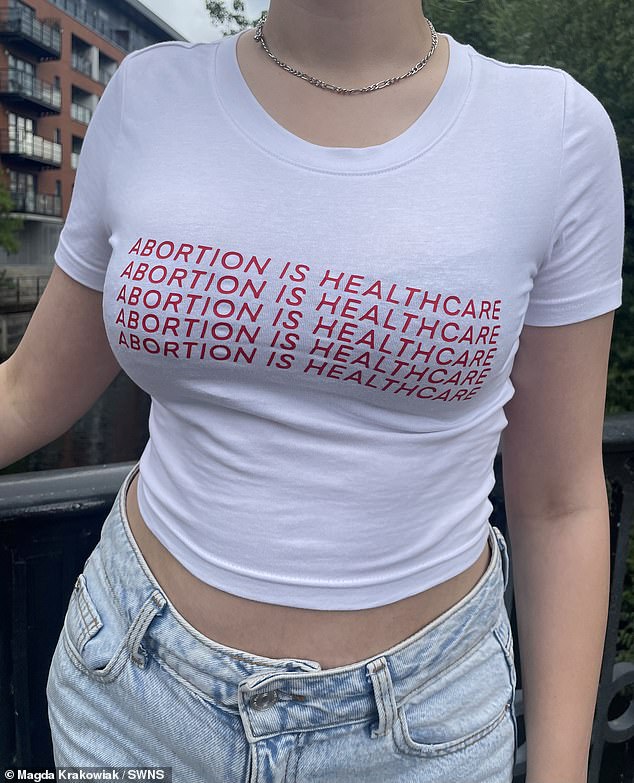 ‘It wasn’t long before our online orders went crazy and we had to work all through the night to meet demand.

‘We couldn’t believe what was happening, but there was no time to stop and think – we had to take advantage of the coverage we were getting on social media.’

Since then, sales have been consistently high, and the couple are earning more and more revenue every day. 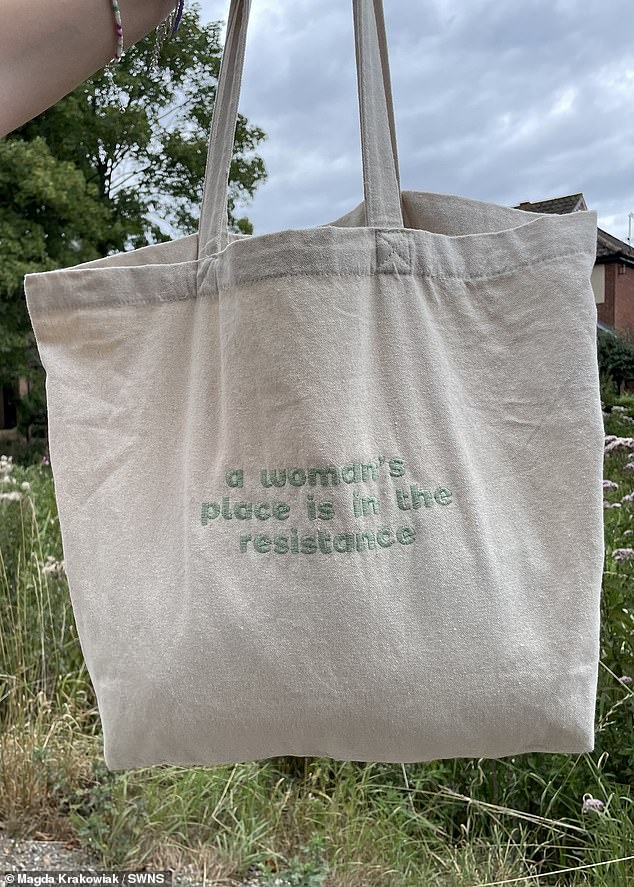 But Magda says even before Lovera Clothing went viral, her and Kevin were happy with their venture because it allowed them time to raise their kids

They are thrilled with how their operation is going but refuse to get complacent, and are keen to kick on and expand the business further.

But Magda says even before Lovera Clothing went viral, her and Kevin were happy with their venture because it allowed them time to raise their kids.

She said: ‘Our work schedule is set out so we have most of the day off looking after our toddler and our baby.

‘Then, once they’re down for the evening, we work late into the night, sometimes till three or four o’clock in the morning.

‘Since we blew up, work has been gruelling and it can be stressful keeping up with such high demand.

‘Our house is full to the brim with boxes, packaging and stock, but business is booming, and we can’t wait to see what’s next for Lovera Clothing.’