Mother on benefits feeds 800 people with fruit and vegetable allotment

A mother-of-three on disability benefits has claimed to have fed almost 800 people after turning her flowerbeds into an allotment amid the cost-of-living crisis.

Carly Burd, from Harlow, Essex, says she ‘panicked’ when she first heard about the rise in food and petrol prices last summer and decided to start growing her own produce to help with her bills.

The 43-year-old – who lives with multiple sclerosis and lupus – says she couldn’t afford to buy planters so set about making her own out of scrap wood in June 2022.

Within three weeks, the thrifty parent was growing her own potatoes, carrots, turnips, swede and leeks and started sharing her vegetables with other people who were struggling in the community. 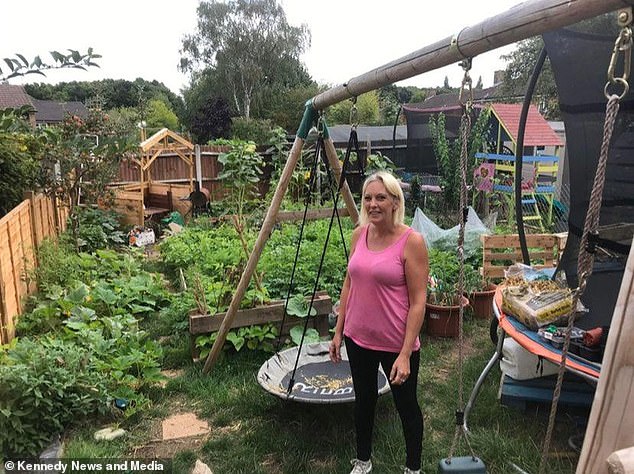 Carly Burd, 43, from Harlow, Essex, dug up her garden when she first heard about the cost-of-living crisis last summer. Pictured: The mother-of-three in her garden allotment

Carly said: ‘I have multiple sclerosis, so I’m on disability. I’m on the lowest money, lower than what you need to survive on.

‘So when they said there was a cost of living crisis, you don’t need to tell me twice. That is a massive warning.

‘I didn’t just think of me. I thought of everyone I know in Harlow who struggles and fits that criteria.’

In a state of panic, the mother says she didn’t think twice about digging up her flowerbeds – especially after seeing how much her produce has helped other households. 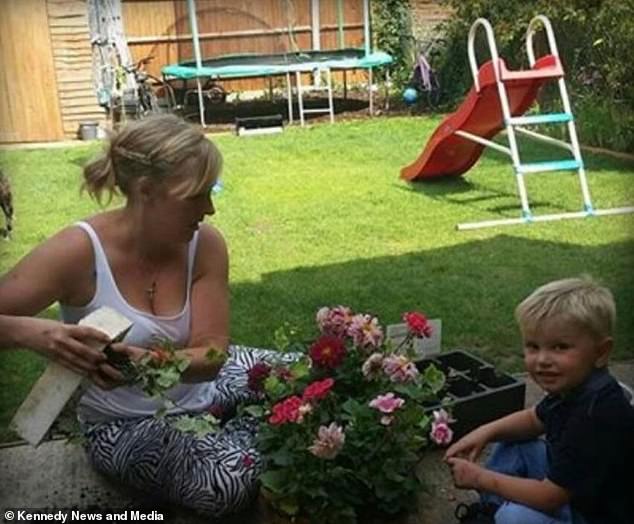 Pictured: Carly and her son Jude in the garden before it became an allotment. The mother now grows her own potatoes, carrots, turnips, swede and leeks 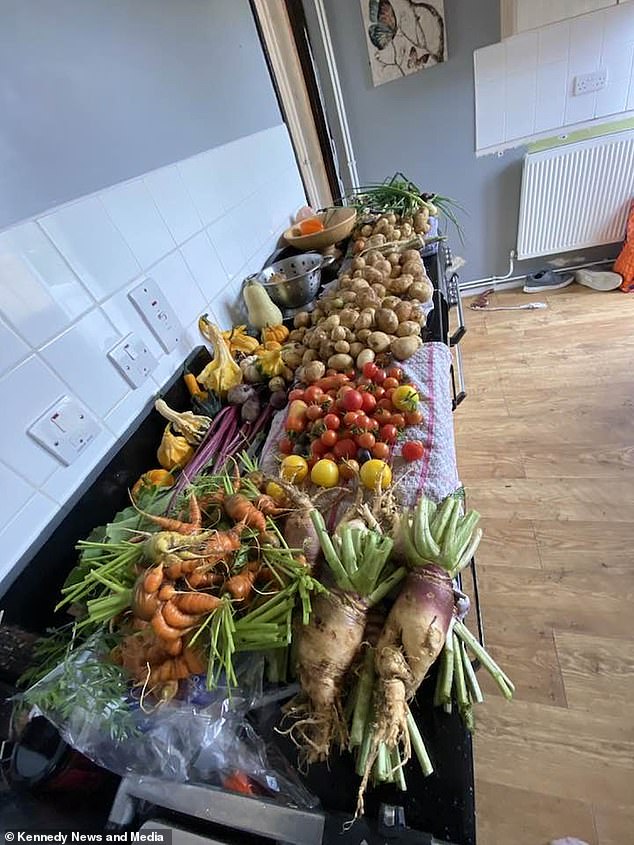 Carly has fed almost 800 people in the past six months by sharing her local produce with the community. Pictured: some of the vegetables the mother has grown

In the past six months, Carly says she has fed up to almost 800 people with her home-grown veg – which she puts into care packages along with food donations from kind-hearted locals.

The mother parcels up to a week’s worth of seasonal veg to feed a family-of-four and makes 20 home deliveries each week.

She continued: ‘To me, it’s a walk in the park and it’s no effort, but people say to me that it’s wonderful and that it’s changed their life.

‘They said that they’ve been able to buy heating because they didn’t have to spend their money on food.’ 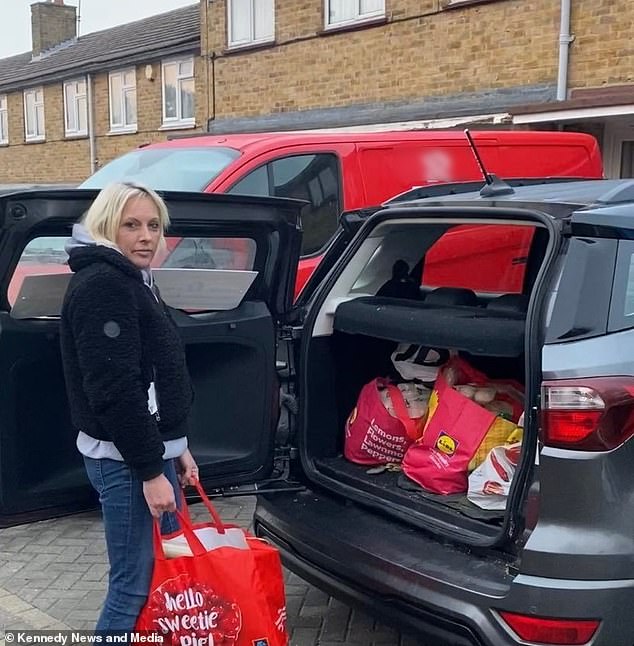 Carly also does weekly drop-offs to households most in need. Pictured: Carly loading the car to take families struggling with their bills some vegetables 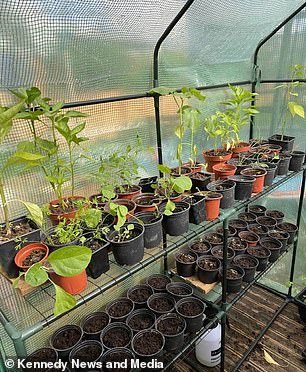 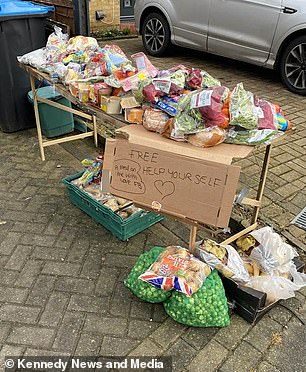 Left: Carly has dozens of pots to grow her vegetables in her garden. Right: A table of food Carly put out to help her local community

Following on from this success, Carly is now working on another allotment near her home to grow even more food for struggling households.

As news of her project started to spread, Carly says she started to receive ‘heartbreaking’ messages from those in need all around the country.

She added: ‘This will get bigger because I’m going to keep pushing, but in the meantime there’s nothing I can do to help all these other people. It hit me last night, and I was absolutely disgusted with Rishi Sunak.

‘I thought, ‘you try sitting here and saying no to these people. You try turning around to them and saying they can’t have food [like I have to]’. It breaks my heart. 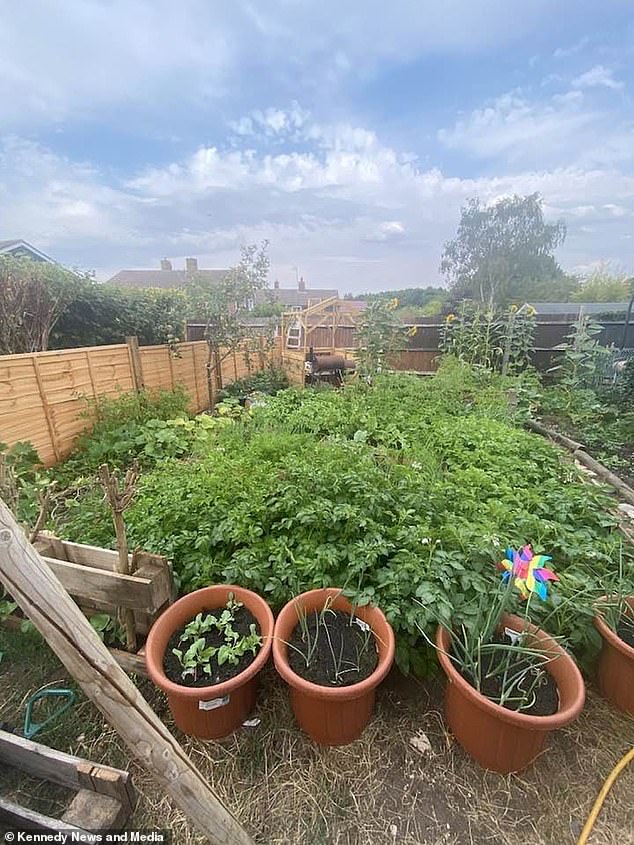 Every inch of Carly’s garden has been taken up by the allotment. She made her own planters out of scrap wood to save money in June 2022 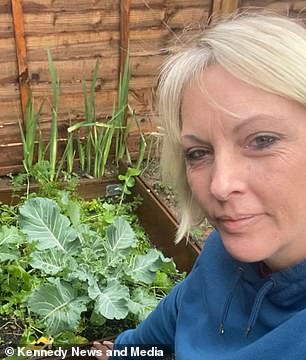 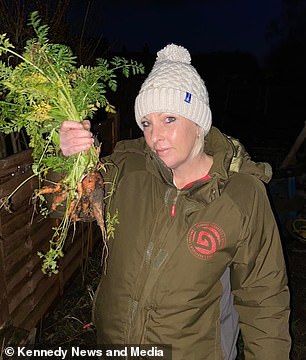 Left: Carly poses with one of her planters in her garden allotment. Right: Carly holding her homegrown vegetables

‘I’ve done all of this on a minus [credit balance], so what the hell are the government doing? It has taken me six months to change 779 people’s lives.

‘It feels like I’m only at the start. In my head, I’m five years down the line, and I can see what I want at the end.

‘But I’m not going to be happy with what I’m doing until I’m at the end and my end result is that we’re all working together as a community.’

Savvy saver reveals how she built up a £10,000 cost-of-living ’emergency fund’ in seven months after paying off £21,000 debt by slashing her bills and working seven days a week

Thrifty father-of-two who organised a ‘free’ Christmas reveals his top tips for cutting down energy bills (including how he makes it fun for his children!)