It used to be the kiss of death for any movie – the dreaded "straight to video" (and, later, DVD or digital) tag. But the release on Friday of Mulan on Disney+ may mark the moment the straight-to-digital strategy went from $2 shop to upmarket boutique, and not just because it will cost you $34.99 (on top of your $8.99 monthly subscription) to watch at home.

The straight-to release has had a reputational makeover in the past few years, thanks to big-name directors making movies for Netflix et al. But what began as a response to the changing art-house market has now morphed, thanks to the pandemic, into a strategy for even the biggest end of town. 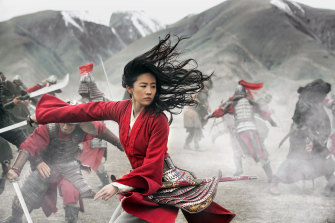 Liu Yifei as Mulan. Disney is hoping its release strategy cuts through with consumers.Credit:Disney

Universal led the way, releasing its animated family film Trolls World Tour in US cinemas and on premium video on demand (PVOD) on the same day in April (in Australia it will have a traditional cinema release when it premieres on September 17).

It took more than $US100 million via PVOD, but the real success of the experiment came later, when the studio struck a deal with AMC, the largest cinema chain in the US, to reduce theatrical windows – the period when a film is only available in cinemas – from 90 days to 17. (In return, AMC will get a 20 per cent cut of PVOD revenues.)

Mulan is a big step up. Directed by New Zealander Niki Caro of Whale Rider fame and beautifully shot by Australian Mandy Walker (Hidden Figures, Australia), Disney's $US200 million blockbuster is a stunning piece of work that deserves to be seen on the big screen.

That was Disney's intention, and even as the pandemic swept the world it held fast to the planned release date of March 27 until it became clear North America and China – each accounting for roughly a quarter of global box office – would not be open. It rescheduled to July, then August, but as uncertainty remained it finally opted to release the film on its new digital streaming platform. 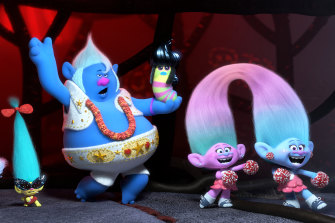 What the industry will look like five years from now is anyone's guess. A report released in August by London-based analysts Ampere modelled four options for release strategies in the post-COVID world. It found that a PVOD release without theatrical "would make more money for a mid-tier title", but the margin for error was small.

For blockbusters, "a PVOD approach would be risky", with a short theatrical window before digital release likely to produce the best results. However, releasing straight to PVOD on its own platform could potentially increase a studio's take.

But the study suggests differences in PVOD take-up around the world mean the best option might be to release films via PVOD in North America but in cinemas elsewhere – which is precisely what Disney is doing with Mulan, which will screen in cinemas in China.

All of this points to the fact that screenwriter William Goldman's axiom about the movie business has never been more apt: nobody knows anything.

Perhaps the only certainty is that in the post-COVID world, the only option not on the table will be business as usual.