A unisex salon in London have defended their decision to cancel a nail appointment for a gender-fluid customer, saying it was against their beautician’s beliefs to touch a man because she is Muslim.

Andrea Di Giovanni, 26, took to Twitter to blast Style Studio in Wimbledon, London, for their ‘foul’ decision but slammed the salon for having ‘had the nerve’ to defend their stance on Wednesday.

The 26-year-old performer, who identifies as ‘they’, claims the salon called them around an hour before the appointment and asked for their gender – however upon hearing their voice proclaimed they were ‘a man’ and hung up.

However the director of Style Studio, who identified herself only as Maria, has doubled down on their position, claiming that as a Muslim the beautician is unable to touch any men and stating their beautician’s services are for ‘females only’, despite it being a unisex hair salon. 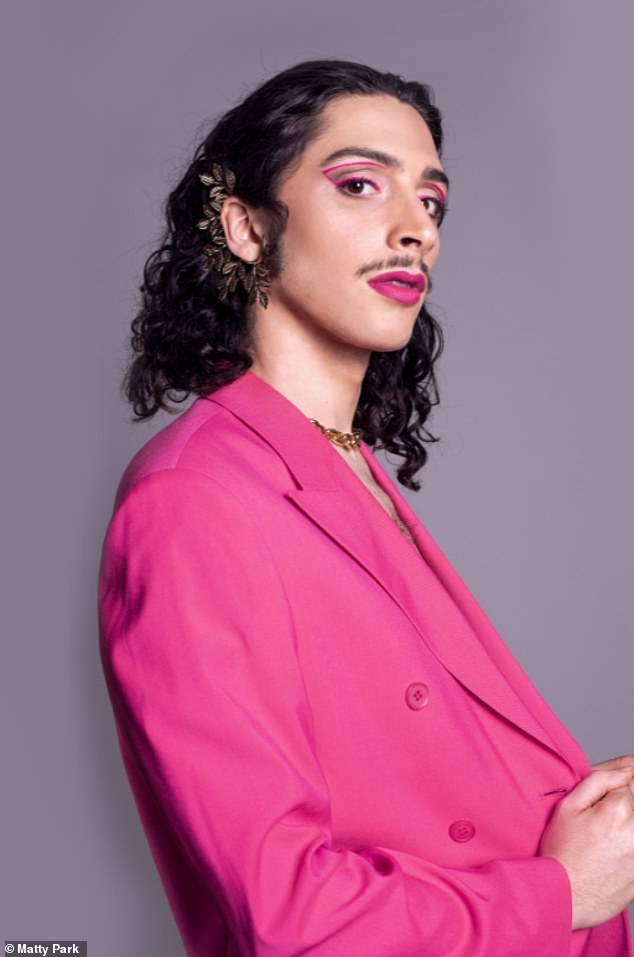 Andrea Di Giovanni who identifies as ‘he/she/they’, booked to have their nails done in Style Studio, London, but the salon cancelled because their Muslim employee can’t touch a ‘man’

Posting on Twitter, Andrea wrote: ‘I’m absolutely disgusted. This nail Salon Style Studio in South Wimbledon called me to cancel the appointment because they don’t do nails on man.

‘This queerphobic bulls**t in 2021 is unacceptable. I’m speechless.’ (sic)

Andrea called for Treatwell, a listing site that hosts salons, to remove Style Studio over their stance, writing: ‘@Treatwelluk this salon shouldn’t be listed on your website.

‘It’s disgusting. I hope you take some action. Being discriminated for my identity is an actual crime.’ 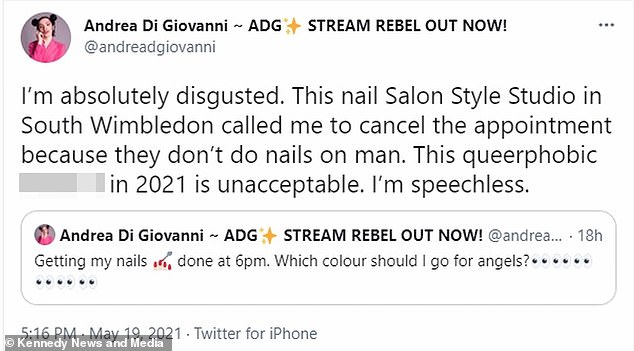 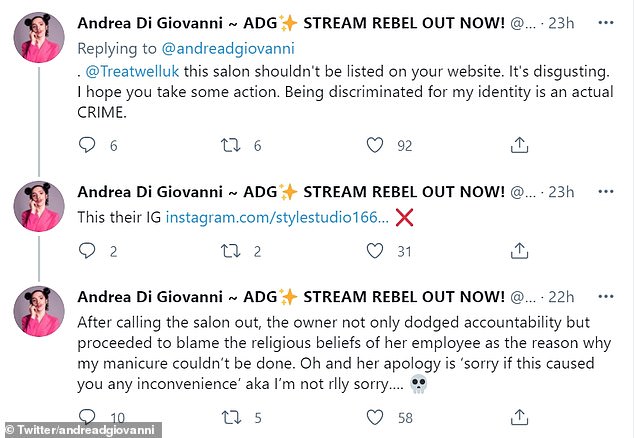 The singer, 26, took to Twitter to slam the salon as as ‘queerphobic’ and called for Style Studio to be removed from Treatwell

Andrea later explained: ‘I was due for my manicure at 6pm, but I got a call at around 5pm.

‘When she first called up and asked me directly “Are you a man or a woman?”, I was puzzled, because that question asked with that intention felt transphobic anyway.

‘Once she heard my voice, she went “Oh, so you’re a man”, and hung up the phone.

‘The owner had the nerve to come back to me, saying that she didn’t feel they were discriminating. 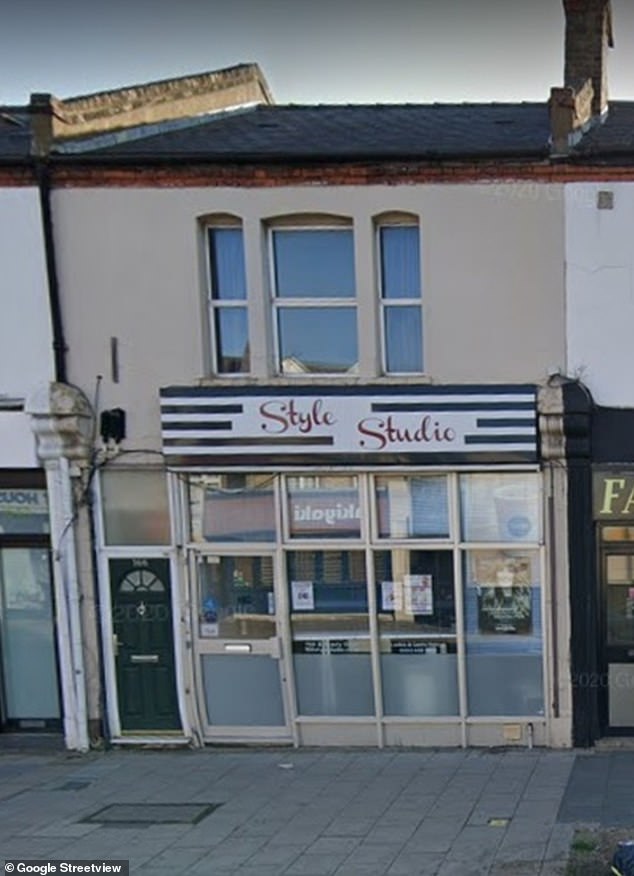 Style Studio in Wimbledon defended their stance, stating that it was not a non-binary or trans issue but that their employee had a right to practice their religion and that they were short on other beauticians due to Covid

‘She said the only available nail technician was Muslim, and for that reason, she couldn’t do the nails on a man.

‘To which I responded, “That’s even more foul, in my opinion. You’re dodging accountability.”

‘She was shifting the blame to the religion of her employee – and it’d still be discrimination. Religion doesn’t exempt somebody from discriminating.’

They continued: ‘There was a way to go about it – who calls up a customer one hour before an appointment to inquire about their gender? 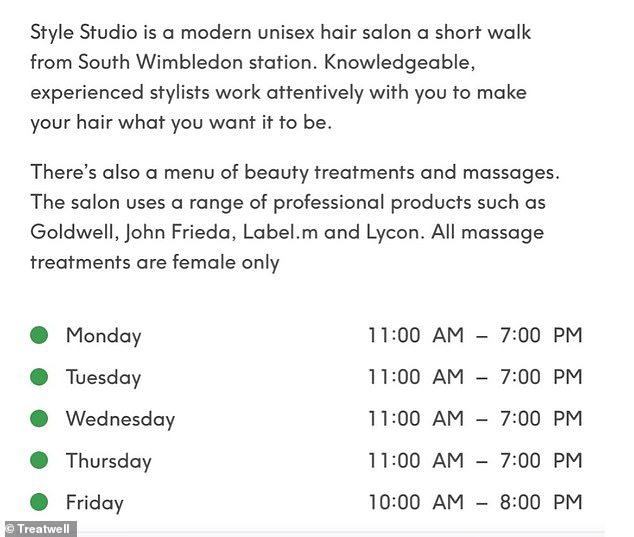 Andrea argued that because the salon called themselves ‘unisex’, they should have employees who could work on ‘queer folks’

‘They advertise themselves as a unisex salon. The only-female treatment listed on the website is massages, which is fair enough.

‘It just felt very suspicious. Were they going through their bookings looking for people to call out?

They added: ‘If you call yourself a unisex salon, you should have employees who can do treatment on queer folks (instead of men) – trans women are women anyway, so the assumption that I’m a man is already transphobic.’

However the director of Style Studio, who identified herself only as Maria, responded claiming that as a Muslim, the beautician is unable to touch any men and stating their beautician’s services are for ‘females only’, despite it being a unisex hair salon. 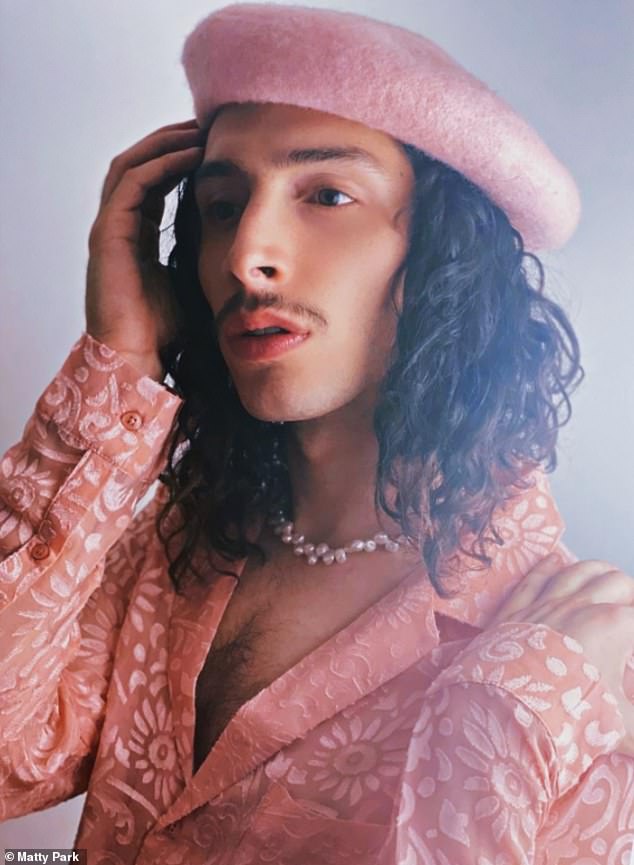 Andrea, from Wimbledon, London, claims the salon called them around an hour before the appointment on May 19 and asked for their gender, however upon hearing their voice proclaimed they were ‘a man’ and hung up

Maria went on to explain that the beautician identified Andrea as a man due to their ‘male voice’ but claimed it was not a non-binary or trans issue at all because they were unaware that Andrea was gender fluid at the time.

Maria said: ‘The call was answered by a person with a ‘male voice’. The beautician therefore asked to check who the appointment was for.

‘Please kindly note, at this stage not having seeing the person on the other side of the line, the beautician could not in any way discriminate the client on the basis of being transgender or non-binary. 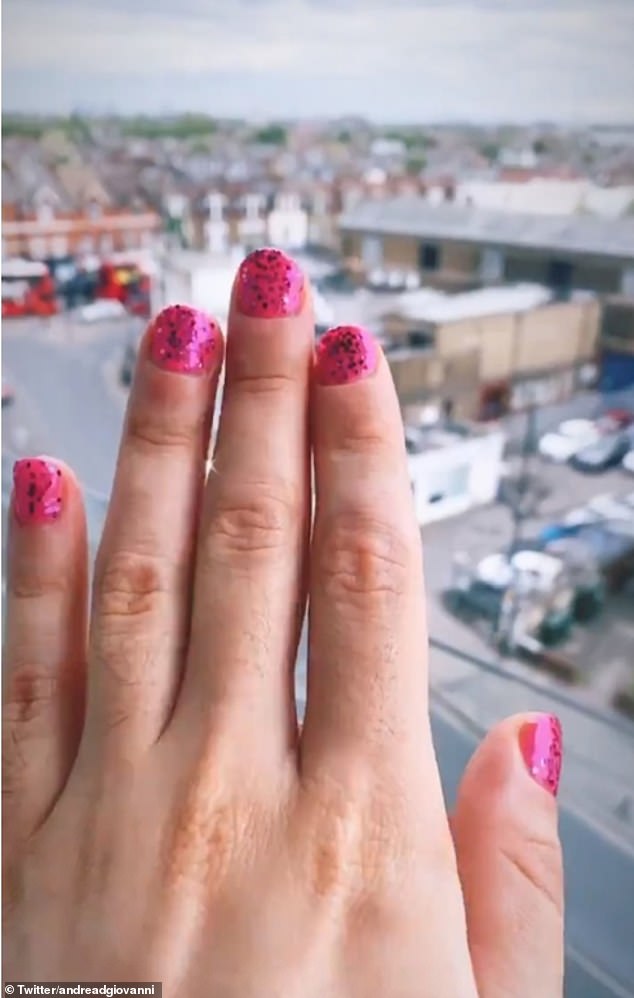 Andrea, who revealed on Twitter that they had got their nails done elsewhere the next day, (pictured)

‘It would not be out of place to mention that the same way Andrea has stated on all the social media platforms that there must be equal treatment towards non-binary or transgender individuals, I strongly believe that the beautician has the same right in relation to her religion.

‘The client, without clarifying anything further with myself or the salon, went ahead to post information and abuse on social media.

‘I have contacted the client in response and did explain to him [them] the reasons for the situation occurred. The response I received was that religion was used as an excuse to discriminate him [them], which I find truly unacceptable and bizarre.’

She went on to explain that they are primarily a hair salon and can only provide limited beauty services, with one beautician working at the salon at the moment, due to Covid.

Maria said: ‘The services are for female clients only. We have had numerous male clients previously enquiring about the beauty services and had no issue with anybody after clarifying the circumstances and reasons for not being able to provide the service in question. 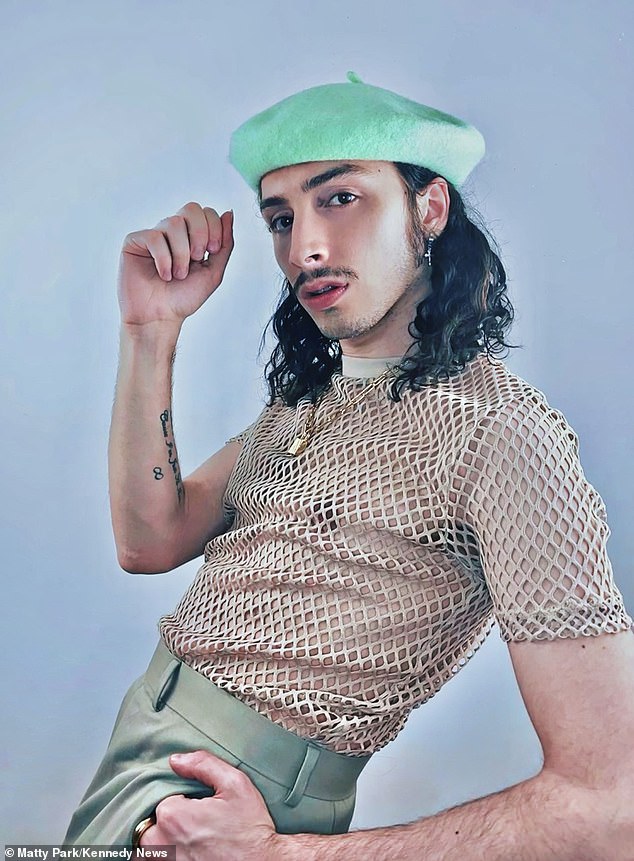 ‘Clients always had respect and understanding towards the religious beliefs and rights of our beautician.

‘I am actually quite shocked and outraged that this situation had been taken out of context at such great level and has been turned into an issue of discrimination against transgender and non-binary community, when this fact is irrelevant to the whole situation in question.’

Andrea contacted salon listing website Treatwell regarding the incident, who replied on social media and claimed they intended to investigate the matter.

Treatwell said on their Twitter account: ‘Thanks so much for making us aware of this! We’re really sorry to hear this.

‘Having salons who offer a positive experience to all of our diverse customers is extremely important to us. We’re are now investigating this and we’ll be in touch with you asap.’ 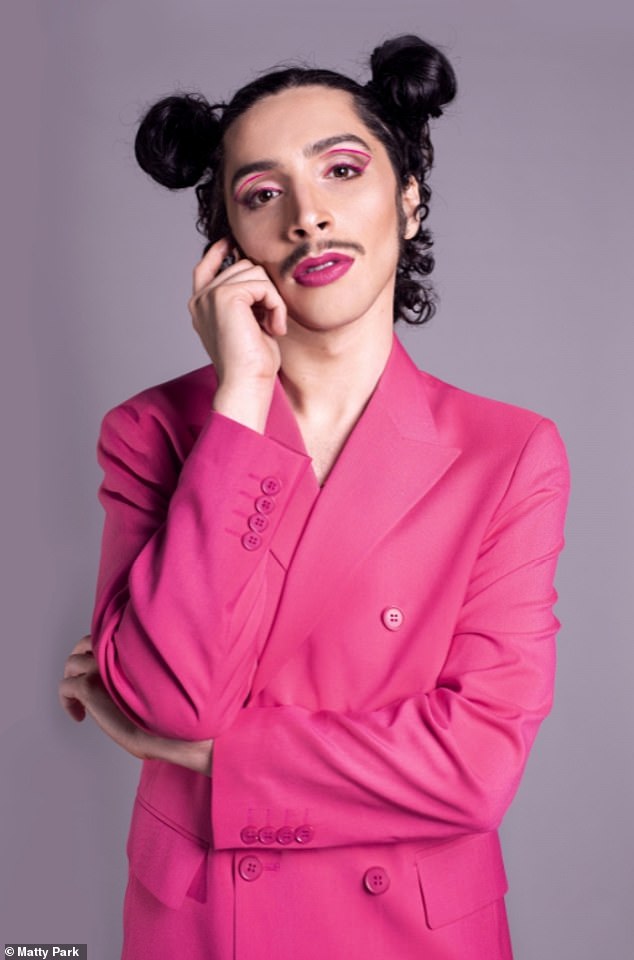 Andrea contacted salon listing website Treatwell regarding the incident, who replied on social media and claimed they intend to investigate the matter

Andrea, who revealed on Twitter that they had got their nails done elsewhere the next day, argued: ‘It should be a safe space for queer people, because we need to access our beauty treatment.

‘I’m nearly 27, I have thick skin, I have a backbone. Transphobic episodes are not new to me. But I wouldn’t wish this on anybody.

‘I think they looked me up before the appointment. Andrea is a female name usually, so they must have looked me up online.

‘If she’d called me and told me about the situation, apologised and said “How can we find a way around this”, it still would have been bad but I wouldn’t have gone full throttle.

‘I just wanted a manicure, for f**k’s sake. I’m lucky I’m in a good space – this could have been really triggering for somebody else.

‘These things do have an impact on the lives of gender-diverse people.’