A group of eminent Australians has written an open letter to Prime Minister Scott Morrison calling for an end to delays in establishing a federal anti-corruption watchdog, saying the nation has waited long enough. 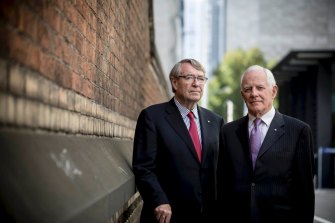 Former judges Stephen Charles and David Harper are signatories to a letter calling for an end to delays in establishing a federal anti-corruption watchdog.Credit:Arsineh Houspian

The open letter, published in The Sydney Morning Herald on Tuesday, says the government has kept people waiting 922 days for a federal integrity commission despite both sides of politics promising one during the last election.

David Harper QC, a former judge on the Victorian Supreme Court of Appeal and a signatory on the letter, said the continual delays “can no longer be tolerated”.

“Based on all available evidence, one can only conclude this government has no interest in a genuine federal anti-corruption watchdog with teeth,” he said.

“While in the current climate, it is understandable that priorities can change, this government has found time to tackle a great number of the government’s self-described priorities outside of the coronavirus response – just not this one.”

The open letter highlights a quote from then-attorney-general Christian Porter, who told Parliament in August 2019 the establishment of an integrity commission would “be a lot quicker than the 12 months that [Labor] promised”.

Mr Morrison announced plans for a Commonwealth Integrity Commission in December 2018 but the plan stalled during 2019 and was not revived until late 2020, when the government released the draft bill and asked for views on the plan.

The Coalition’s proposed model for the integrity commission has faced criticism it would be weak and toothless. As proposed, it could start investigations only after a referral from another agency, would have to hold hearings in secret and couldn’t make any findings or recommendations relating to a member of Parliament.

Independent MP Helen Haines has introduced legislation for an integrity body that builds on recommendations from previous inquiries. She’s offered to work with Attorney-General Michaelia Cash using her bill as a starting point, but doesn’t expect anything will happen before the next election.

“We’ve had enough consultation on this,” Ms Haines said.

Mr Harper is a member of the national integrity committee, formed under the auspices of the Australia Institute think tank. The committee is campaigning for an effective federal anti-corruption body with broad jurisdiction, strong investigative powers and the ability to hold public hearings when it is in the public interest to do so.