Need a cuddle? You can now get 'boyfriend speakers' that hug you from behind 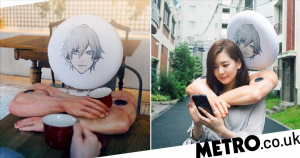 Ever just feel like you need a cuddle but still not in the mood for human contact?

Not to worry, because Level-5, a Japanese video game company has partnered up with Otome Yusha to provide a solution – so you can have your hug and skip it too.

Introducing ‘boyfriend hug speakers’, a strange new product that features two muscular arms that you can wrap neatly around yourself, and a white pillow decorated with a photo of a video game character – the protagonist from the company’s latest release, ‘Hero of Maidens’.

To make your experience even more intimate, the arms have built-in Bluetooth speakers which play music as you cuddle up together, according to the New York Post.

Hero of Maidens is a role-playing game, which according to AV Club and Sora News 24, is ‘targeted at women about beautiful men who intend to “save the world through love”‘ – and the boyfriend speakers are part of the promotion for the release.

There isn’t a female equivalent of the speakers, which is a shame since men deserve hugs too, but it’s definitely a unique product.

The product isn’t just good for hugs, you can also bring it along to a café and perch the product on top of a table for an intimate date.

Or take your faux boyfriend for a casual walk in the park and a meal with friends (beware, people will definitely stare).

If you fancy a new tech gadget, we’ve got bad news: unfortunately there is only one set and it’s not for sale – but you could win it.

Otome Yusha is running a Twitter competition until 9 August, which will see one lucky person getting their hands on a hugging machine.

To be in with a chance, you need to follow the account and tweet out a series of Japanese hashtags: #オトメ勇者 and #抱きしめスピーカープレゼント (#OtomeYusha and #HugSpeakersPresent).

If there’s high demand for the boyfriend speakers, the company may even consider producing more of them (though we can’t quite see this trend catching on).

Alternatively, you could just fill a sweater with foam and wrap that around yourself, while using your regular speakers?

END_OF_DOCUMENT_TOKEN_TO_BE_REPLACED

END_OF_DOCUMENT_TOKEN_TO_BE_REPLACED
We and our partners use cookies on this site to improve our service, perform analytics, personalize advertising, measure advertising performance, and remember website preferences.Ok