A newly resurfaced 1977 interview with Duchess of Argyll sees Margaret declare she ‘didn’t like’ the ‘unkind’ press attention that came with her high-profile divorce from her husband.

In an interview with Melvyn Bragg in BBC’s Read All About It, which was shared by BBC Archive’s Twitter account, Margaret said she had found coverage in the 1930s to 1950s ‘very pleasant’, adding she was friends with journalists who she ‘absolutely trusted.’

However she said she had found publicity had become ‘ghastly’, adding: ‘ I must say lately, the press, has become very unkind to put it quite mildly. I haven’t liked it at all.’

The interview has resurfaced as the BBC aired a three-part series telling the real-life story of Margaret, who in the early 1960s was at the centre of scandal when her high-profile divorce case exposed her adventurous sex life. 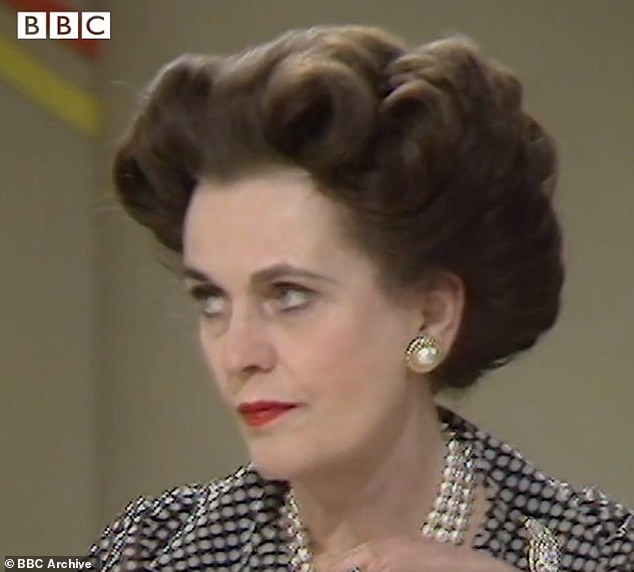 During the clip, Melvyn said: ‘One of the things that accompanied your life, like a friend or foe, but it has been there the whole time is publicity. Have you found it has impacted the way you lead your life?’

Margaret responded: ‘No not at all.’

The interviewer went on to ask if she thought ‘all publicity is good publicity’, to which she said: ‘Goodness no, I’ve had the most ghastly publicity in the world. 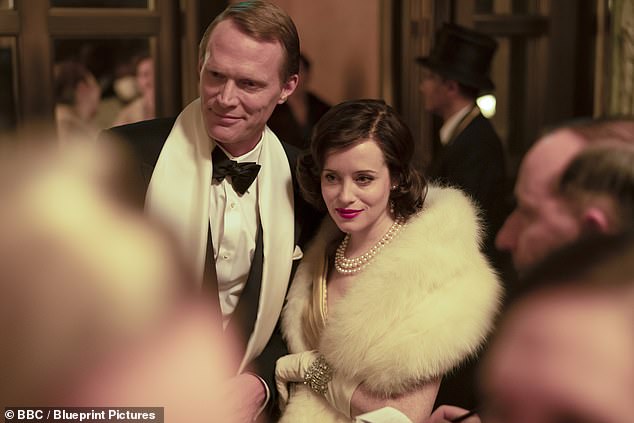 The interview has resurfaced as the BBC aired a three-part series telling the real-life story of Margaret, who in the early 1960s was at the centre of scandal when her high-profile divorce case exposed her adventurous sex life

‘There’s no harm in it. We all enjoyed our little paragraph with absolutely no manners – and we all were great friends of the writers – all those men were actually friends of ours, we met at parties and trusted them completely.

‘They wore two hats. They were either there as your friend or they were there to interview you to ask you questions for a newspaper.

‘You were two different people with them. You could absolutely trust them.’

Margaret dominated the front pages as her divorce from the Duke of Argyll (portrayed by Paul Bettany in the new BBC drama) played out – featuring accusations of forgery, theft, violence, druDujgtaking, secret recording, bribery and the pictures. 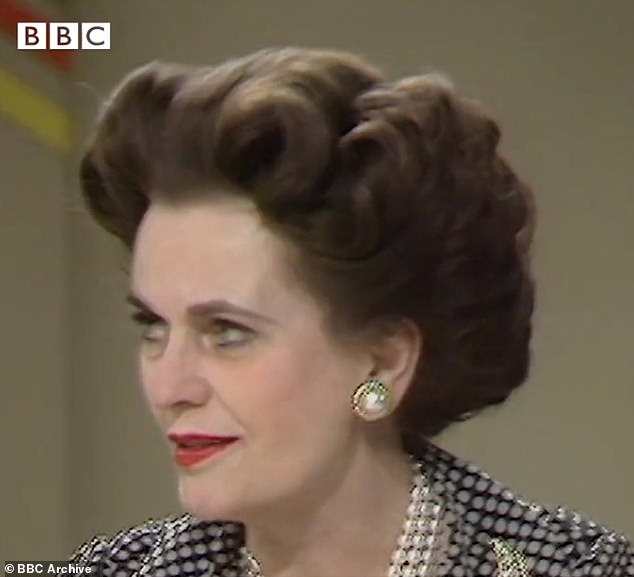 Margaret said she had found coverage in the 1930s to 1950s ‘very pleasant’, adding she was friends with journalists who she ‘absolutely trusted’

The first episode of the three-part series, showed Margaret (Foy) seducing a man at a dinner party before romping with her on-screen husband at his Scottish stately home and in a cleaning cupboard at her parents’ property.

It comes just days after Foy spoke out about how she hates doing sex scenes, saying they make her feel ‘exploited’ and that they are the ‘grimmest thing you can do’.

Born in 1912, the only child of a self-made Scottish millionaire, Margaret was described by her biographer Lyndsy Spence as ‘a daddy’s girl with an absent father, living with a jealous mother who sought to remind Margaret of her every shortcoming’.

As such, Margaret developed a stammer for which she was treated unsuccessfully by Lionel Logue, King George VI’s speech therapist.

She was just 15 when the future movie star David Niven, two years her senior, got her pregnant while holidaying on the Isle of Wight, after which her father sent her to a London nursing home for a secret termination.

As a young woman, her beauty was renowned in society and she was courted by princes and millionaires, welcoming playwright Noel Coward, actor Cary Grant and oil tycoon J Paul Getty, among others, to her Mayfair home. She went on to have four failed engagements before a failed marriage to Charles Sweeny, an Irish-American stockbroker. 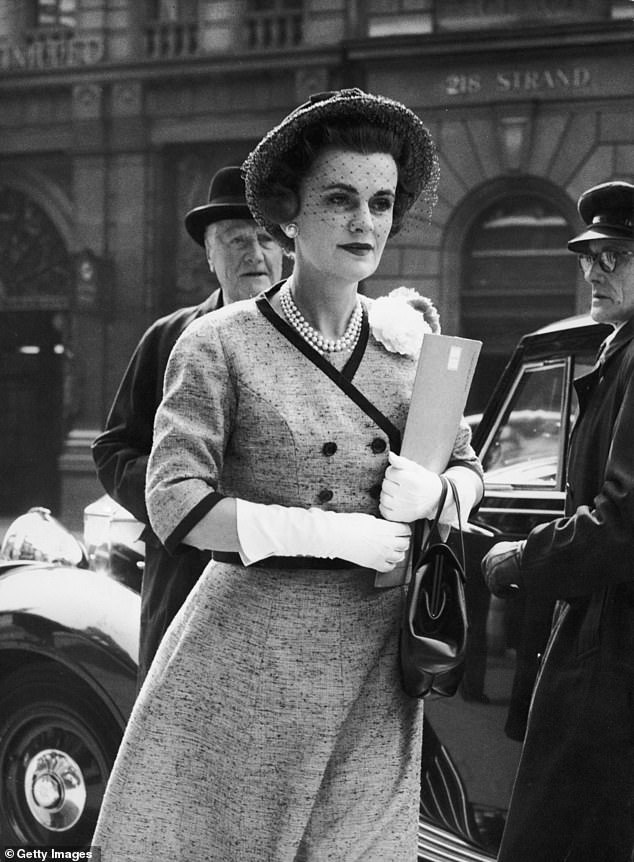 Margaret Campbell, Duchess of Argyll (1912 – 1993) outside the law courts in the Strand on the second day of her case

Their wedding day in 1933 was a glamorous affair, stopping traffic for three hours as 2,000 guests attended the Brompton Oratory in west London while another 2,000 onlookers gathered to see the stunning 28ft train to her Norman Hartnell wedding gown.

Despite having a daughter, Frances, and a son, Brian, together, the couple’s relationship broke down after 14 years, with Margaret claiming all Charlie wanted in a spouse was a ‘pretty brainless doll’ and they divorced in 1947.

In 1951 she wed Ian Douglas Campbell, the 11th Duke of Argyll, after meeting him on a train at Paris’s Gare du Nord station in 1949. He’d pursued her relentlessly, knowing she was rich while his own estate was worth nothing.

She took pity on him and convinced her father to give him £100,000 to restore his family seat in Scotland, Inveraray Castle. The duke then signed a Deed of Gift offering various items as security for the money, and vowed to marry her when his own divorce had come through.

After tying the knot the couple lived in luxury, skiing in St Moritz, sailing in the Bahamas and holidaying in St Tropez. Fashion designers and socialites clamoured around the duchess.

But the duke soon showed his true colours, with rumours of gambling and drug and alcohol addiction, as well as a vile temper.

But angry that the duchess was no longer funding his excessive lifestyle, the duke hired private detectives to follow his wife. He filed for divorce.

Central to the case was a set of blurry Polaroid snaps taken via the bathroom mirror of the duchess’s Mayfair apartment of her wearing nothing but her signature triple string of pearls. In some, she was entertaining an unidentified lover whose head had been cropped out of the picture and who came to be known as the ‘Headless Man’.

The pictures had been discovered by her husband, who allegedly hired a locksmith to gain access to his wife’s private papers.

And yet the technicalities of the prehistoric legal system at that time (and the fact that many of her ‘lovers’ were gay) prevented the duchess from giving her side of the story without risking imprisonment.

A Very British Scandal focuses especially on the attitudes towards women at the time, as Margaret was vilified throughout the divorce battle for refusing to go quietly, despite being betrayed by friends and publicly shamed by society.

It took four years after he filed for divorce for a verdict to be reached, which granted it to the duke on the grounds of Margaret’s adultery.

She was ordered to pay most of the £50,000 legal bill. Meanwhile nothing was said about his own affairs or his subsequent remarriage to Mathilda Mortimer, a rich American, just six weeks later.

After the case Margaret fell out with her daughter Frances, who had not wanted her to oppose the divorce, and thanks to her extravagant lifestyle and some bad investments her fortune diminished. She lost her home and, although eventually reconciled with Frances, her children put her in a nursing home in London, where she died penniless in 1993.

The original photograph showed Margaret – wearing nothing but a string of pearls – involved in a sexual act with a ‘headless’ man in her home.

The photo had been cropped at the man’s neck and for years his identity was unknown.

However, a documentary in 2000 identified him as Cabinet minister and Winston Churchill’s son-in-law Duncan Sandys.