Melbourne's new contemporary art museum will be twice as big as Sydney's and almost as large as London's spectacular Tate Modern.

But despite a huge $1.46 billion pledge in this week's state budget, the NGV will need to mount the biggest philanthropic push in its history to complete the building and fill it with art: a push that began officially on Tuesday – though it has already been courting cashed-up American donors. 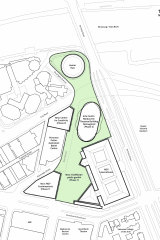 A plan of the new arts precinct.

"There's been no compromise in terms of scale," said Tony Ellwood, director of the National Gallery of Victoria, who said the building will be a "game changer" for the Australian arts scene.

"We could have gone with 1000 different variables, but we pitched (to the government) a building that will last 100 years."

The government had resisted the temptation to make a "nice quiet addition" to the NGV, instead choosing to make a big impact with a dedicated building, Mr Ellwood said, which would help draw international visitors.

"You need that scale to convey its world-class nature," he said. At 30,000 square metres in floor area, a third of which is exhibition space, the NGVC will be more than twice as big as its Sydney rival the MCA. It approaches the size of some of the world's greatest contemporary arts museums: the Tate Modern has a floor area of 34,500sqm, of which 7800sqm is gallery space not including the 3300sqm Turbine Hall.

There will be two or three cafes, a "massive" design store, a huge welcoming foyer and a big education wing with lecture theatres.

The government's $1.46 billion will go towards the museum, a 18,000 sq m public garden in the heart of the precinct, and "groundwork" for phase two. That stage, as yet without a start date or funds, will include a major upgrade to the Arts Centre theatres building, plus a Centre for Creativity that will house small- and medium-sized arts organisations, a performing arts gallery and the Australian Music Vault.

An artist’s impression of the Melbourne Arts Precinct including an 18,000 sq m public garden.

Mr Ellwood said despite the size of the government's commitment, it will not fully pay for the museum they dream of building. They have started talking to philanthropists about bridging the gap.

"To complete it to the scale and ambition that we want, it will be the biggest philanthropic campaign ever run by us," he said.

The have already started talking to potential patrons, telling them "if you get behind it, it can be even better" Mr Ellwood said.

The gallery has launched an American "building fund" for donations, through the Charities Aid Foundation of America, which invites donors to "be part of a once-in-a-lifetime moment for Australia" by contributing to the building of NGV Contemporary.

The fund also hopes to help build the NGV's collection of work by leading American artists and designers.

Our Morning Edition newsletter is a curated guide to the most important and interesting stories, analysis and insights. Sign up here.