No time to waste in tackling skills crisis

It has become a constant refrain from the many who hire people that it is increasingly difficult to find skilled workers to fill vacant positions. That anecdotal evidence of a major skills shortage in this country was confirmed in new figures from the National Skills Commission. The figures are released annually, and the latest reveal a significant transformation of the labour market.

The broad-brush figure shows that the list of jobs that have skills shortages has increased to 31 per cent of occupations, a jump of 12 percentage points since last year. Shortages were most prevalent in technical and trade positions, with nearly half of all occupations within this area not having enough skilled people to fill positions. 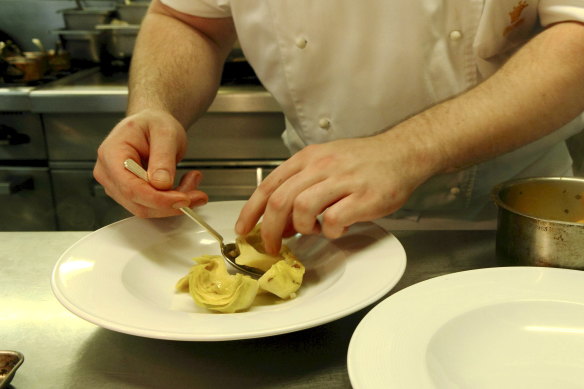 Chefs are among the occupations now in shortage.Credit:Jessica Shapiro

Among professional occupations that usually require a higher qualification, there was a dramatic increase from 19 per cent to 39 per cent of jobs with a skills shortage, although this was largely driven by a shortfall in health professionals and teachers. This is a clear sign that while the pandemic may be largely behind us, the impact on the economy could linger for years to come.

And in a red flag for federal and state governments making big announcements about adding staff to aged care homes and hospitals – as the Victorian state election turns into a battle over how many promises can be made for new or expanded hospitals – the report reveals that almost half of health professional positions advertised went unfilled during the past year because of a lack of qualified applicants.

As has been well canvassed, shutting Australia’s national borders for two years to prevent the spread of COVID-19 left the nation with a temporary migrant deficit of up to 190,000 people. This has led to a shortage of workers in the hospitality and retail sectors in particular. Figures from the Australian Bureau of Statistics show that since the borders were flung open again, the number of migrants has risen, with the population jumping by 124,168 in the first three months of this year, the largest quarterly increase since 2017.

But that is clearly not enough. During the recent Jobs and Skills Summit, the need for a greater investment in training and higher immigration intake was made clear by many of those who attended. In response, a one-year deal for an extra 180,000 fee-free TAFE places was put in place under the $1 billion National Skills Agreement, as well as an increase in the permanent migration intake from 160,000 to a record 195,000 places this year. This added to the 20,000 extra Commonwealth-supported university places already promised by Labor.

But there is clearly more work needed. On Friday, Skills Minister Brendan O’Connor will again meet his state and territory counterparts to try to thrash out a potential $3.7 billion funding agreement over five years for the vocational education sector. The same funding package was on the table under the Morrison government, but negotiations broke down over how the states and territories would spend the money.

This needs to be resolved urgently. Among the top 20 largest employing occupations listed by the National Skills Commission, many of the jobs with a shortage of skilled workers in metropolitan and regional areas involve training at a TAFE, including chefs, aged and disabled carers, motor mechanics and carpenters. And it’s not just money that is the issue. Data from the National Centre for Vocational Education Research has shown that only about 55 per cent of apprentices across a range of trades who started their training get to the end.

For too many years, with unemployment relatively high, governments have been able to relegate skills policy to a second-tier priority. Australia is now paying the price. Labor has made a start in playing catch-up, but there is much work to do.

Michael Bachelard sends an exclusive newsletter to subscribers each week. Sign up to receive his Note from the Editor.