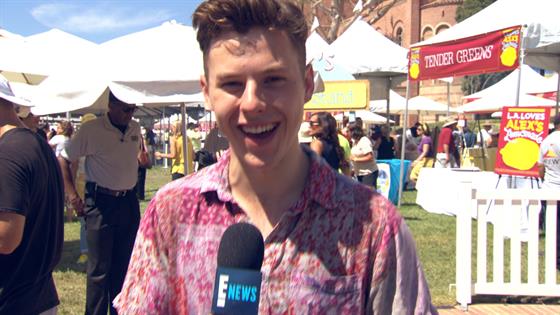 The cast of Modern Family is up for the E! People’s Choice Awards!

E! News caught up with Nolan Gould at the L.A. Loves Alex’s Lemonade event in Los Angeles, where the actor asked fans to vote for Modern Family at the PCAs.

The performer took the mic and started his plea with, “We have been nominated for a People’s Choice Awards for Best Comedy [Show of 2019]. You should vote for us. I like to think we’re funny!”

“I don’t know, it’s our last year, throw us a sympathy vote! Just go out strong,” he joked. Modern Family started production on its eleventh and final season earlier this summer, with members of the cast emotional about its end.

At the 2019 Television Critics summer press tour, Ty Burrell—who plays Gould’s on-screen father—reminisced on the show wrapping saying, “I think right now we’re all just feeling so grateful for the time that we’ve had, for the 11 years that we’ve all been on such a special ride that it’s not feeling like the end yet, when I think the end is going to be hard—be genuinely hard.”

You may not be able to control the Dunphy family leaving your screen, but you sure can decide if they win a PCAs award!

To show the cast a little love, you can head to the PCAs voting website or take to Twitter to cast your ballot.

Be sure to tune into the live show on Nov. 10 to see if the Dunphy family takes home an award.

To see the full interview with Gould, watch E! News at 7 to see more.