North West and Lizzo Perform a TikTok Dance Backstage at Her Show: Watch 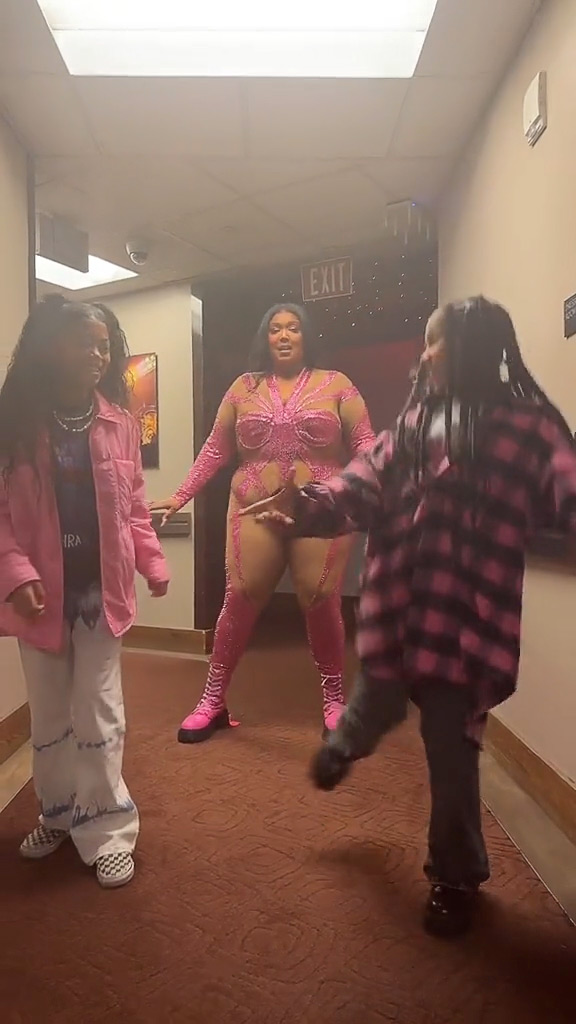 A special cameo! North West and Lizzo teamed up to do a viral TikTok dance backstage at the pop star’s concert.

North, 9, and her friend Ryan performed the “Get Sturdy” dance with the “About Damn Time” singer, 34, in a video shared via North and mom Kim Kardashian’s joint TikTok account. In the 14-second clip, which North shared on Sunday, November 20, the two children stood in front of Lizzo — spaced out in formation and ready to record. The trio, who were all color-coordinated in pink ensembles, jumped around with bright smiles as Lizzo danced and laughed with the kids.

After hanging out with the Yitty designer at her Saturday, November 19 show at the Kia Forum in Inglewood, California, North shared another video from the concert that night. In this TikTok clip, the young girl cheered on Lizzo as the “Tempo” singer took the stage for her final performance of the Special 2our.

North is the eldest daughter of Kardashian, 42, and Kayne West, who also share son Saint, 7, daughter Chicago, 4, and son Psalm, 3. The Keeping Up With the Kardashians alum filed for divorce from the rapper, 45, in February 2021 after six years of marriage. She was declared legally single one year later.

The mother-daughter duo created their joint TikTok account in November 2021​ and have posted dozens of videos together since. However, the introduction of the social media platform — which explicitly states is “managed by an adult” — has caused some issues within the famous family.

In December 2021, the reality star shared a text message from sister Kourtney Kardashian and Scott Disick’s son Mason, 12, providing a warning about using social media based on his experience after North went “live” to give a tour of her home.

“Hi I don’t wanna disrespect North but I don’t think she should do the lives unless someone is with her because people are always screen recording and she might tell information that isn’t correct and stuff like that,” Mason wrote at the time. “I did the exact same thing as she did I would do the lives and now I regret saying one of the things that I said. Just in case for safety.” In March 2020, Mason also did an Instagram Live denying rumors that Kylie Jenner and Travis Scott were back together, which led his parents to delete his account.

“I appreciate you looking out Mason. And I agree. [North] felt bad and I don’t think she will do it again but it could be good if you talk to her about it,” the KKW Beauty creator replied. Mason shared that he would “love to” talk to his cousin about it.

Kim Kardashian and Kanye West’s Sweetest Moments With Their Kids

The “Jesus Walks” artist criticized Kim in February for allowing their daughter to make her own TikTok account. “SINCE THIS IS MY FIRST DIVORCE I NEED TO KNOW WHAT I SHOULD DO ABOUT MY DAUGHTER BEING PUT ON TIK TOK AGAINST MY WILL ?” West wrote via Instagram at the time.

The Skims Founder, for her part, made a rare public statement calling out the Yeezy designer for his “constant attacks” amid their divorce. “As the parent who is the main provider and caregiver for our children, I am doing my best to protect our daughter while also allowing her to express her creativity in the medium that she wishes with adult supervision — because it brings her happiness,” she explained in her own Instagram post at the time. “Divorce is difficult enough on our children and Kanye’s obsession with trying to control and manipulate our situation so negatively and publicly is only causing further pain for all.”