‘Not a documentary’: Are we ready for The Crown to play with the recent past? 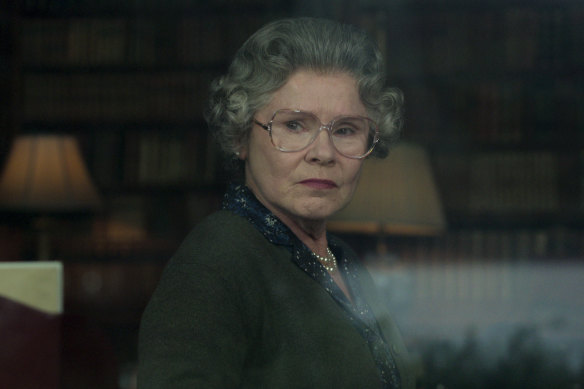 Imelda Staunton as Queen Elizabeth II in The Crown.Credit:Netflix

When does recorded history become the recent, remembered past?

It’s a question that lies at the heart of the new series of Netflix’s The Crown. For many viewers, season five, which is set between 1991 and 1997, will conjure images and memories in the way that season one, set in the ’50s, never could. See if you can picture it: Charles and Diana’s marriage was in tatters, Royal family members were tabloid staples and, at the nadir of the Queen’s famous “annus horribilis”, Windsor Castle was seriously damaged by fire. In previous seasons of The Crown, only royal experts have been able to say ‘that’s not how it was’. Now everyone can take a view.

Staunton recognises that the death of the Queen just two months before Netflix screens The Crown has brought the past 30 years into sharp focus. 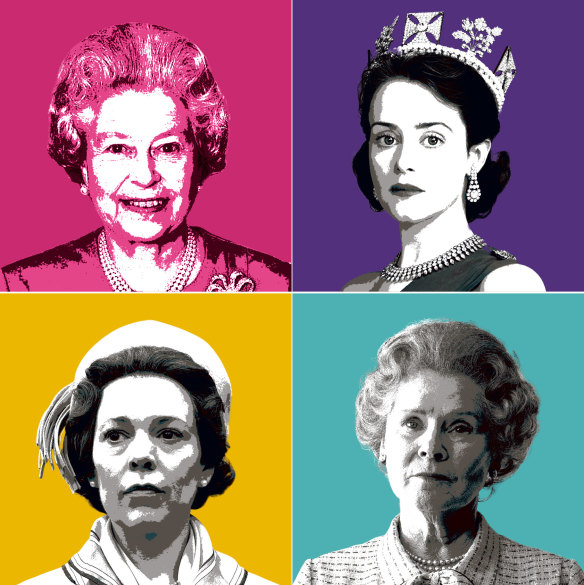 Queen Elizabeth II and the women who played her: Claire Foy, Imelda Staunton and Olivia Colman.

“Particularly with recent events, it seems to have concertina-ed everything, bringing her up to the present.”

But she says that just because the Queen and her life are at the front of people’s collective mind, the task of a drama such as The Crown remains constant.

“It’s the same as when Claire Foy was doing it,” says Staunton, speaking in London in tandem with Jonathan Pryce [Game of Thrones], who takes over from Tobias Menzies in the role of Prince Philip.

“All the hullabaloo around at the moment, I think is directly as a result of the Queen’s death.”

“You’ve got the writing that is hanging on to these real events, and the writing goes in between and connects us emotionally to those events. We’re not doing a documentary — you’re trying to give an emotional life to these people that we think we know.”

Come the 1990s and there is a lot of emotion to convey: in particular the marriage of Charles and Diana (now played by Dominic West and Elizabeth Debicki) descends into all-out war with the publication of Andrew Morton’s Diana: Her True Story and, later, Diana’s tell-all interview with Martin Bashir on the BBC’s Panorama.

But this is a season of many troubled marriages, not least that of the Queen and Prince Philip themselves. In this fifth run of The Crown, Philip, for years the Queen’s rock and (in season one) her idol, is shown to be drifting away from his wife: nearly an episode and a half is given to Philip’s burgeoning friendship with Penny Knatchbull (Natascha McElhone), Countess Mountbatten of Burma whose husband was Philip’s godson. There is the suggestion that something might have happened between them — hands are touched in lingering close up as they enjoy their favourite sport of carriage-driving together — but without any confirmation that it did (Prince Philip denies it explicitly to Elizabeth in a combative confrontation: “It’s friendship, Lilibet,” he stresses. “It’s not that sort of companionship. That would just make me even more lonely.“)

The point, according to Jonathan Pryce, is that this is a crucial story from the marriage that had, until The Crown, been largely forgotten.

“When Peter [Morgan, writer] mentioned it to me when I first met him, I knew nothing of this friendship, nothing at all,” he says. Penny, in fact, had been a major influence in Philip’s later life.

“Philip was more of an enigma for me … He had a bad press for most of his life as this irascible, grumpy, mildly racist man.”

“It’s no coincidence,” Pryce says, “that Penny was one of the very few non-family members at Philip’s funeral. But I think we treat this issue sensitively and in a realistic way. It’s a friendship, nothing shocking. Newspapers in the UK who haven’t seen it have tried to describe it as something else. It isn’t. I think it’s a wonderfully touching relationship and a very honest depiction of a man in his 70s who is still wanting to lead a full life.”

Philip, Pryce points out, has never really been in the limelight the way that his wife has always been. It meant that his task was very different from Imelda Staunton’s — she had a record and an archive to play with and against. He didn’t.

“The difference for me is that the image of the Queen is so well formed in everyone’s minds, because she was the spokesperson for the family,” he says. “She was the one we heard talk and give broadcasts. Philip was more of an enigma for me: I can’t recall hearing him talk in public. He had a bad press for most of his life as this irascible, grumpy, mildly racist man, always putting his foot in his mouth with his comments. 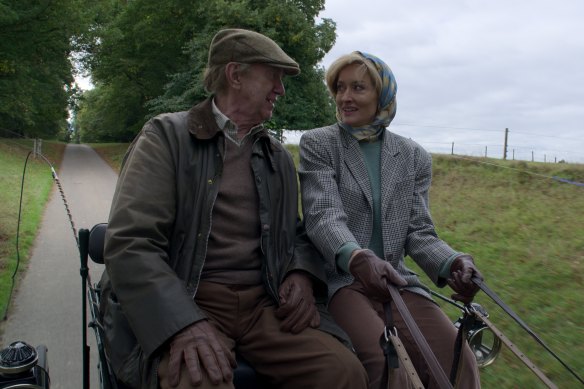 “I wanted to get behind that image and find out what he really was like, and to discover that he was an intellectual, highly intelligent man who also had a great interest in science and the natural world. So it was a challenge, but also a delight to bring that to the fore.”

Philip’s role in “the Firm” is of course as an adjunct to the main family line, but he and Elizabeth had, by this point, been married for nearly 50 years. Any married couple will recognise the strains inherent in such a long relationship — Staunton says that her and Pryce’s depiction is founded in their own experience.

“What’s quite nice is that Jonathan and I have known each other for over 30 years. You’re also dealing with a long marriage. And we’re both in long marriages [Staunton to Downton Abbey’s Jim Carter; Pryce to the actress Kate Fahy]. So we’ve got all that to draw on. The scenes felt very, sort of real, didn’t they?” she says to Pryce. “Whether they were slightly funny scenes or scenes where not enough was said or things were left unsaid, it all felt just right.”

Philip and Elizabeth’s marital ructions are as nothing compared to the carnage that surrounds them. Season five of The Crown shows three out of her four of the Queen’s children having marital breakdowns, with the Duchess of York’s affair with her financial advisor revealed in the papers with a photograph of John Bryant sucking Sarah Ferguson’s toe. 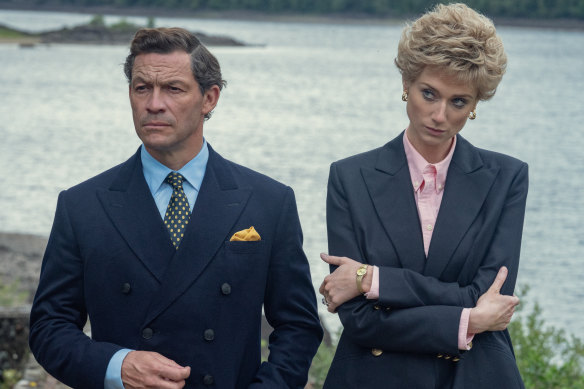 The marriage of Prince Charles (Dominic West) and Princess Diana (Elizabeth Debicki) descends into all-out war in the new season of The Crown.Credit:Keith Bernstein/Netflix

In the show, this prompts a spiky discussion between Charles [Dominic West] and the Queen about the children’s marital difficulties, and what sort of moral example their failures sets to the nation. At one point, Charles says in anger that “if we were an ordinary family and social services came to visit, they would have thrown us in to care and you (the Queen) in to jail.”

In the UK and the wider world, this has all led to accusations varying from The Crown vilifying the Queen to its questioning the suitability of Charles being king (episode 5 reminds viewers of a leaked phone call to Camilla Parker-Bowles in which Charles said he would like to be reincarnated as her tampon.)

Staunton has heard it all already, and her first episode on the throne hasn’t even been shown.

“All the hullabaloo around at the moment,” she says, “I think is directly as a result of the Queen’s death. If this had been coming out two years ago, people would just say, ‘oh, The Crown is on again’. But I think people are still feeling very sensitive towards the royal family. And understandably so — there’s not a lot we can do about that.”

But she stresses the difference between the history of long ago and something the audience think they remember like yesterday.

“When Claire Foy became the Queen,” she says, “we didn’t know what went on behind closed doors but because it was so long ago, no one was saying, ‘well, she would never have done that.’ That is what it is. We finished making season five, six months ago [that is, some time before the Queen’s death.] I hope that in some respects, viewers will take some comfort from spending a bit more time with these people.”

The Crown (season 5) is on Netflix from Wednesday, November 9.