Surveillance footage showing a man hurling rocks through the doors and windows of houses of worship in New York City left community leaders on edge. Over the weekend, police arrested a 29-year-old man on hate crime charges in connection with the vandalization of several Bronx synagogues, which included the destruction of prayer books.

The NYPD Hate Crimes Task Force announced Saturday that they arrested Jordan Burnette, who is from the Bronx, for refusing to cooperate with officers and provide proper identification after he was stopped for riding a bicycle against the flow of traffic. Surveillance footage allegedly showed Burnette smashing a van windshield with a rock ahead of his encounter with police.

Further investigation connected Burnette to several vandalism incidents at Jewish houses of worship. A caretaker at Adath Israel of Riverdale told police that a bicycle stolen from the synagogue’s shed matched the one Burnette was riding when he was stopped by officers.

Burnette faces charges including burglary as a hate crime, and “numerous charges related to the acts of vandalism as hate crimes that have taken place in this community,” Jessica Corey, commanding officer of the NYPD Hate Crimes Task Force, said during a news conference Sunday.

Burnette allegedly threw rocks at multiple synagogues, breaking many glass windows and damaging other property. Police believe Burnette is responsible for damaging at least four synagogues in Riverdale in April. 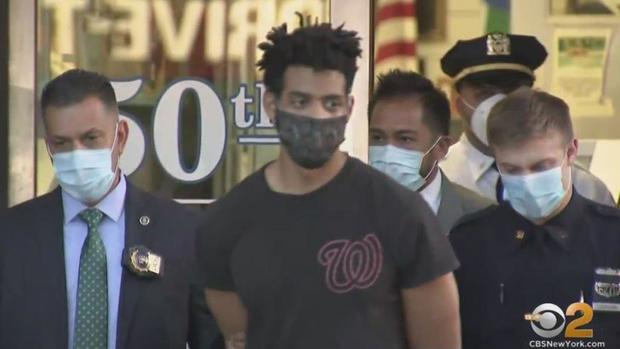 John Miller, NYPD’s Deputy Commissioner of Intelligence and Counterterrorism, said that officers from the counterterrorism bureau were guarding synagogues and other houses of worship in the area.

“I think that this will bring a great sense of relief to that community,” Miller said of the arrest. “Hopefully, life will resume back to normal and people will be able to worship without fear.”

When questioned about a possible motive, Corey said that the investigation is ongoing. It’s not clear if Burnette has an attorney.

Watch as Deputy Inspector Corey of @NYPDHateCrimes update the media on the arrest of an individual sought in a hate crimes criminal mischief pattern in the confines of the @NYPD50Pct pic.twitter.com/hm2A9vR20z

The number of antisemitic incidents in the U.S. remained near a historically high level in 2020, with more than 2,000 instances of assault, harassment and vandalism reported across 47 states and Washington, D.C., according to an annual survey by the Anti-Defamation League (ADL) released last week.

Last year marked the third-highest year for incidents against American Jews since the ADL began tracking data in 1979. The states with the highest numbers of incidents included New York, New Jersey, California, Florida and Pennsylvania.

The Capitol attack on January 6 showed many rioters wearing clothing with antisemitic messages, including the phrase “Camp Auschwitz.” Some Jewish leaders said the growth of antisemitic crimes intensified under former President Trump’s administration.

Community leaders praised the arrest of Burnette, but remain concerned about the rise in hate crimes against religious groups.

“We commend @NYPDHateCrimes @NYPDnews for their steadfast efforts to find the perpetrator & welcome the arrest of this individual who terrorized the #Jewish community,” tweeted the Community Security Service, a volunteer synagogue security group, added that is helped police identify the suspect.

“In the same week that ADL’s annual audit showed antisemitism to be at historically high levels, it was deeply disturbing and upsetting to see four temples brazenly vandalized multiple times in Riverdale,” Scott Richman, regional director of the ADL New York/New Jersey, said in a statement. “These incidents serve as a sobering reminder that we must continue to work together to stop antisemitism and gate from spreading in our communities. Everyone deserves to feel safe when practicing their religion at houses of worship.”