Olive Morris: The feminist icon 'rabble rouser' whose life was cut all too short 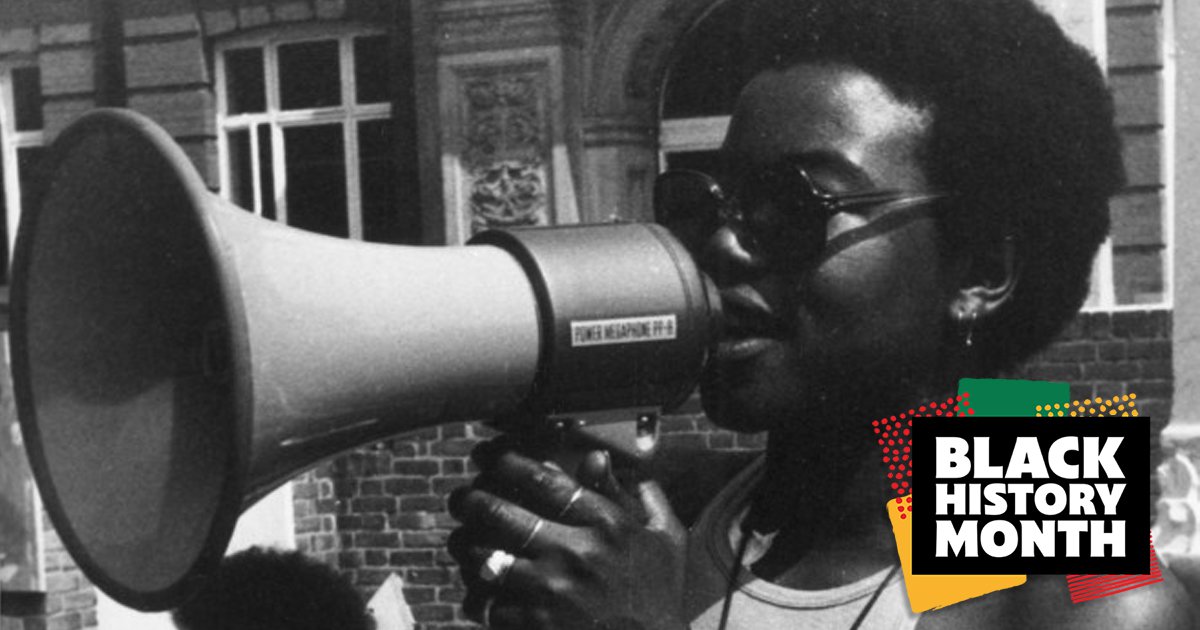 Olive Morris was not the sort of person to shy away from confrontation.

‘She spoke her mind, you couldn’t mess with Olive. If she didn’t like something, then you would know,’ her friend Danny DaCosta once said.

Olive’s instinct to fight injustice was laid bare on November 15, 1969, when she intervened during the arrest of Clement Gomwalk, a Nigerian diplomat accused of stealing his own car.

As she walked towards Desmond’s Hip City in Brixton – one of London’s first Black-owned record stores – she noticed a crowd of people surrounding a white Mercedes and police van.

Police started arresting protesters, and Olive, then aged 17, was grabbed by both legs and shoved headfirst into the van.

Accounts of what happened vary, but Olive said officers inside the vehicle piled on top of her and left her struggling for breath.

She was repeatedly slapped and kicked during the journey to the point where blood poured from her nose, according to her account, which was printed in the May 1970 issue of Black People’s News.

Olive told how officers were shouting things like, ‘bloody w*gs, this is England you know’, and remarked on how she was a girl but ‘looked like a man’.

Surrounded by 15 policemen at Brixton police station, she said she was made to take off her jumper to ‘prove’ her sex.

One officer then reportedly pointed his truncheon at her and said: ‘Now prove you are a real woman. Look, it’s the right colour and the right size for you. Black c**t.’

Olive also recalled how when a female officer entered the room she begged her to take her away from the men, to which the office is said to have replied: ‘If you shut up, they won’t hit you.’

To add insult to injury, following her terrifying experience, the teenager received a £10 fine and a three-month suspended sentence (later reduced to one-month). However, the shocking incident was a moment that would shape the young woman and galvanise her into a lifetime of tireless activism.

Soon after, Olive – who had moved to London with her family from Jamaica aged nine – joined the youth section of the then-named British Black Panther Movement, at a time when fascist groups like the National Front were on the rise, and tensions with police ran high.

She became instrumental in the campaign to repeal the ‘sus’ law, which allowed police officers to stop, search and arrest people purely on the suspicion of loitering with intent to commit an offence, and saw many Black people persecuted and harassed.

However, Olive’s activism wasn’t just aimed at the police. In 1971 she marched against the Immigration Bill – seen as discriminatory towards non-white Commonwealth immigrants, and supported workers of all races on the picket lines.

She also rallied for the freedom of American activist Angela Davis, called for the end of the Vietnam War, and supported the liberation movements of Mozambique, Guinea Bissau, South Africa and Zimbabwe.

She protested outside courts at a time when many Black people were being hauled before judges on trumped up charges, including during the trial of the Oval Four, whose names were cleared 50 years later, after being wrongly accused and jailed for stealing handbags.

Olive was arrested during their trial after a clash outside the Old Bailey and successfully defended herself in the dock. Her co-defendant Darcus Howe once described her as a ‘genuine rabble rouser’.

However, while she dedicated her life to many causes, Olive was perhaps best known for advancing the Black feminist movement in Britain.

She and others founded the Brixton Black Women’s Group, and later went on to set up the Organisation of Women of African and Asian Descent (OWAAD).

‘For too long the fact that as Black women we suffer triple oppression has been ignored,’ an issue of feminist magazine Spare Rib explained in June 1979.

It added: ‘The continual lack of interest in the situation of Black women created a vicious circle, so that many of us who wanted to speak out were reluctant to do so. But by contacting each other, and working together, we have now broken this circle.’

One part of this legacy was OWADD’s campaigning against Home Office virginity tests on Asian women aimed at verifying residency and marriage claims – which included a sit-down protest at Heathrow.

Olive was passionate about education, and wanted to help children cast aside from mainstream education into so-called ‘sin bins’ – a disciplinary system for ‘educationally subnormal’ pupils that disproportionately affected Black children, too often viewed as ‘threatening’ or ‘aggressive’.

Where the state failed, the Brixton Black Women’s group picked up the pieces by running classes and reading groups to ensure they received a decent education.

Fellow activist Melba Wilson’s early impression of Olive was of a fierce politico who came across as very serious, and a bit intimidating.

‘Olive was always, sort of “Man the barricades!”. You know “Let’s get out there, let’s march, let’s show these folks that we’re not going to take this”,’ she said in an interview for the Do You Remember Olive Morris? history project.

‘We used to study Marx regularly on Sundays when we met, and Olive seemed so steeped in it. She could quote Marx, she could quote all sorts of, you know, Mao, The Little Red Book…

‘She just, it was definitely a part of her and to that extent she scared me a little ‘cause I just felt, well, I haven’t got that kind of pedigree in terms of my politics. I’m still learning.’

But after suffering a miscarriage, Melba saw a much softer side of Olive.

‘And at the time it was a really, a real loving thing to do because I was really quite bruised from the miscarriage… Olive somehow as a perk or pick-me-up plaited my hair for me… That was a different kind of side of Olive, which was the caring, you know, family side.’

While she was serious about her activism, there was a lot more to Olive than just campaigning or studying Marxist-Leninist literature.

‘You couldn’t not like Olive, it was impossible, you know, and all the memories I’ve got of her is very warm, she was always very, very warm to me, anyway,’ he said in an interview for the Do You Remember Olive Morris? project.

Meanwhile, campaigner Jocelyn Wolfe, who also contributed to the project, recalled: ‘She was loud. She was vocal. She was funny. You know, she laughed a lot.

‘She would chuckle if it was kind of ludicrous situation and just kind of unbelievable… People behaving in a way that she’s not fooled by. She can sort of see beyond that and that would make her sort of chuckle.’

Olive continued her political work when she went to study social sciences at the Victoria University of Manchester, where she founded the Manchester Black Women’s Co-Operative.

Keen to learn from people across the world, she travelled extensively, including a visit to China with a student group to see how the country was building a socialist society.

She and her friend Liz Obi once planned to visit American Black Panther leader Eldridge Cleaver, who was living in exile in Algeria, but they ended up stranded in Morocco.

Recalling their stay in Tangiers waiting for relatives to send money, Liz said: ‘Imagine the two of us, young radical revolutionaries, showing up every day at the British Embassy to get some cash for expenses, and getting our passports stamped with the amount we received.’

If her legacy wasn’t expansive enough, Olive was also dedicated to ensuring decent housing for all, and was a fierce defender of squatters’ rights.

She opened the 121 Railton Road squat in 1973 with Liz Obi, which was used as a women’s centre and later a meeting space for anarchist groups, before a final eviction in 1999.

What was all the more astounding about Olive is that she managed to fit so much into such a short space of time, as she tragically passed away from non-Hodgkin’s lymphoma in 1979. She was just 27.

It is hard not to wonder what else she would go on to achieve had she lived longer, and what she’d make of gentrification and rising rent in present-day Brixton.

In the years following her death, those close to her went to great efforts to preserve her legacy, putting together the Olive Morris Collection at the Lambeth Archives, which is packed with photographs, documents and interviews with people who knew her.

Although Olive was depicted on the £1 note for the Brixton pound – a hyperlocal currency designed to boost the area’s economy – filmmaker Alex Kayode-Kay couldn’t fathom why such a remarkable woman wasn’t in the ‘national consciousness’.

So, he decided to do something about it.

With the help of Brixton residents, he successfully crowdfunded a 10-minute film called The Ballad of Olive Morris starring Brianna Douglas, based on Olive’s arrest as a teenager, which went on to win best short film at the Windrush Caribbean Film Festival Film Awards in Birmingham in July this year.

Alex was amazed that a woman as remarkable as Olive hadn’t already been brought to life on the big screen, adding, ‘She’s a great figure, a folk hero. There are people who’ve been lionised for way less.

‘I feel in terms of teaching in the UK about historical figures of activism or civil rights for people of the African diaspora, there’s actually more of a focus on American figures,’ he says.

‘You will learn about Martin Luther King Jr or Malcom X, but people like Olive Morris don’t really have that kind of status. It’s something that needs to be rectified a little bit I think.’

However, Alex is hopeful and believes there is ‘definitely a moment now’ where people are starting to recognise Olive more, explaining that it isn’t too late for her to become an ‘iconic figure’ for this country’.

He adds: ‘History is only told by the people who want to tell it, it’s that simple.’

The Ballad of Olive Morris will be showing at the BAFTA qualifying Aesthetica Film Festival in York in November – you can buy virtual tickets here.