The Doherty Institute modelling predicts that without low-to-medium restrictions such as density and visitor limits, waning vaccine protection against the Omicron variant puts Australia on track to hit about 200,000 cases a day by late January or early February. 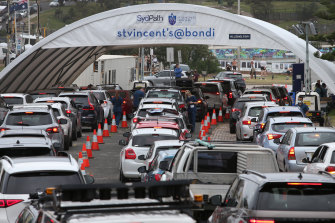 The Doherty Institute modelling predicts that without low-to-medium restrictions, cases would reach about 200,000 a day by late January or early February.Credit:Getty Images

“Boosters alone will not be fast enough to halt the spread of Omicron,” the modelling, seen by The Sydney Morning Herald and The Age, says.

The modelling by a team of researchers including professors Jodie McVernon and James McCaw says rapidly growing case numbers would lift hospitalisation rates to 4000 a day. This would push emergency departments to capacity and fill the nation’s intensive care units, with between 8000 and 10,000 patients expected to be admitted to ICUs.

It assumes only baseline public health safety measures – no stay-at-home-orders, low density requirements, no retail restrictions, schools open – and the partial test, trace, isolate and quarantine responses of a strained contact tracing system. The modelling also assumes that, in addition to being much more transmissible than the Delta variant, Omicron causes equally severe disease, stating that “all international modelling groups are using this conservative assumption”.

It showed a hard lockdown could suppress the outbreak by the end of January, assuming 60 to 80 per cent of Australians received a three-month booster by then.

“Looking at the impact of increasing uptake over time, a rapid booster program would likely enable control with minimal public health safety measures by end of March,” the modellers wrote on December 17.

“The epidemic peak could be delayed with public health safety measures until the boosters kick in, allowing the program to have greater impact.”

The modelling has been given to federal, state and territory leaders ahead of their national cabinet meeting on Wednesday to discuss boosters and public health measures.

Health ministers and premiers in NSW and Victoria are pushing the federal government to fast-track advice from the Australian Technical Advisory Group on Immunisation to speed up boosters, after earlier this month bringing them forward from six to five months after the second vaccination.

Prime Minister Scott Morrison told reporters in Queensland on Tuesday that Australians would not face further lockdowns while supporting calls for masks to be worn indoors.

The Doherty Institute modellers, who drew upon South African data to model an “intermediate” Omicron scenario, forecast about 250,000 cases a day by late January under a six-month booster regime with no mask mandates and all current freedoms maintained.

Without some restrictions on movement, bringing forward boosters to three months would only lower the peak daily infection rate to 190,000, the model said.

While the modelling does not recommend specific restrictions, the Doherty Institute defines “low” public health safety measures as “capacity limits on recreational activities, limits on retail group sizes and restrictions on workplace capacity”, but no stay-at-home orders.

“Medium” public health safety measures are defined as “stay-at-home except for work, study and essential purposes, retail and cafes or restaurants open subject to density restrictions, working from home if possible with density restrictions in workplaces”.

Indoor recreational venues would be closed under medium restrictions, with small numbers of household visitors allowed and the possibility of school closures.

Fascinating answers to perplexing questions delivered to your inbox every week. Sign up to get our new Explainer newsletter here.