In 2005, immunologist Peter Doherty published a scientific memoir subtitled The Beginner’s Guide to Winning the Nobel Prize, a feat he’d achieved in 1996. His latest book is only partially successful in weaving together several disparate strands but – again – provides a fascinating insight into the sort of mind required to get a gong in Stockholm.

Doherty, who confesses to having been “pretty average at tennis” as a young man (he preferred squash, as it got him out of the Queensland sun), acknowledges the ambitious task he has set himself: “A book on empire, war and tennis? Why make the effort to travel this particular byroad?” Why? Because the ever-curious Doherty seeks connections between family history, military history and the DNA of sport – especially tennis, to which he was first exposed on a backyard court made of crushed termite-mounds. 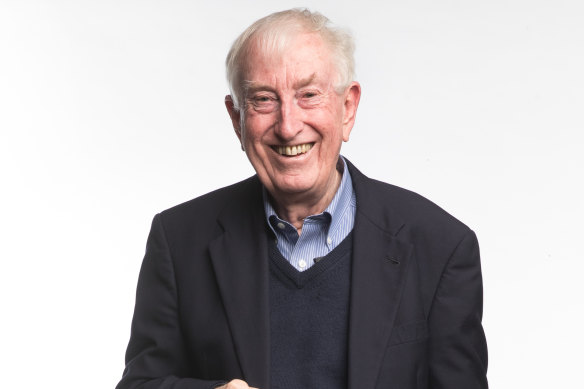 Nobel laureate Peter Doherty is a bowerbird of a researcher and writer, attracted by anything shiny he unearths.Credit:Simon Schluter

The roots of tennis extend way back (Shakespeare mentions it), but Doherty argues that the first 70 years of lawn tennis (1875-1945) are “embedded in much bigger narratives about imperialist ambitions that led to smaller conflicts and then to both WWI and WWII”.

He tells the stories of two of his maternal uncles, Charlie and Jack Byford, both keen tennis players who “with absolutely no prior military involvement, volunteered in 1940 to fight for Australia and Empire”. Charlie never came home; Jack did, although traumatised by his experiences. He once had two impressive mango trees cut down because he was convinced there might be snipers hiding up there.

Doherty writes: “In the only conversation I had with Jack about the war, when I was a high school army cadet, I mentioned that I’d been surprised by the simplicity of the 2-inch mortar … Jack remarked that he’d carried one across New Guinea, but didn’t elaborate. Mortars work like a lob shot in tennis, by throwing a ‘bomb’ up in the air to drop from above.” 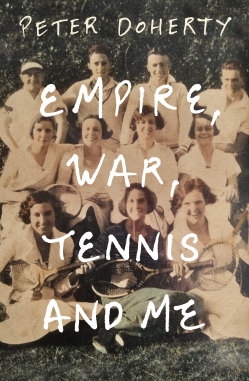 Empire, War, Tennis and Me by Peter Doherty.

This analogy seems forced, and there are times when Doherty strains to link tennis and more serious stuff – as when he notes that the declaration of war early in September 1939 “overshadowed what should have been the biggest Australian story of the month, the beginning of the Davis Cup final”.

Doherty is a bowerbird of a researcher and writer, attracted by anything shiny he unearths. His range of interests is reflected both in chapter headings – The Gentle Art of Ant-Bed Tennis Court Maintenance and Imperial Japan and the American Tension – and his references, which range from the war diaries of Edward “Weary” Dunlop to Stop War, Start Tennis! Lessons of Life and Understanding From a Pakistani Tennis Player, by Aisam-ul-Haq Qureshi.

This is a treasure trove of trivia. Leo Tolstoy was a “passionate lawn tennis enthusiast … first wielding a racquet at age 68”. Pre-politics Robert Menzies, then a young barrister, met his future wife, “the athletic Pattie Leckie”, at Melbourne’s Grace Park Lawn Tennis Club in 1919. Who knew that in 1902 “Teddy” Roosevelt installed the first tennis court at the White House? Or that Gloucestershire man Edwin Budding patented the lawnmower (crucial for the advance of lawn tennis) in 1830?

Despite Doherty’s assiduous exploration of their military history, his uncles remain elusive – especially the older brother, whom he never met. Still, Doherty ponders what might have been: “I understand something of what I missed in not knowing my Uncle Charlie … exposed to his influence and contacts, might I have followed a commercial rather than a scientific path?” Had Charlie come home, his own life might have been very different. Our fates, he concludes, “are determined by random chance”. Not science.

This is best read as personal history rather than a sporting or military reference work. And while it is always risky to take issue with a laureate, I called a foot-fault when he nominated John Betjeman’s A Subaltern’s Love-Song ( “What strenuous singles we played after tea / We in the tournament – you against me”) as perhaps being “the most famous of all tennis poems”. Yes, you can make a case for it. But on the other side of the net I’d have Clive James’ Bring me the Sweat of Gabriela Sabatini.