Pink has always denoted a girlish femininity. What rot

This is what MODERN FEMINISM looks like! Pretty. Frivolous. Pink has always denoted a girlish femininity. What rot, says City supremo HELENA MORRISSEY…

Yesterday I set off on a short overnight business trip. The dress code — both smart casual and casual, with a formal dinner thrown in — presented packing challenges, though, particularly in this heat.

I wanted something comfortable and summery for the train journey, yet smart enough to take me through all the meetings.

In the end I chose one pair of knockout trousers, two fresh blouses, a little cardigan for air-conditioned rooms and one of my favourite Giambattista Valli dresses for the evening event.

My chosen theme? The whole spectrum of pink. While the slacks are eye-catching cerise, the cotton tweed dress is a pale pastel shade. 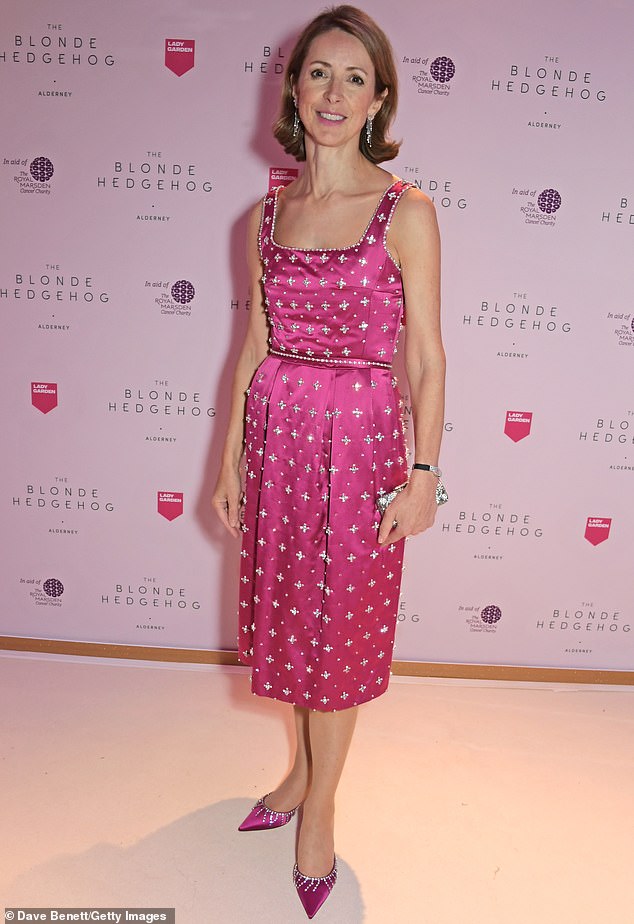 Many may still think this most girly of hues inappropriate for the boardroom — but it’s my go-to colour for the very fact of its femininity.

Positive and flattering, nothing packs a punch like pink.

And I am not the only successful woman who appreciates its subversive power. Take the fearless and formidable Sharon Stone, who last week accepted the Ordre des Arts et des Lettres at the Cannes Film Festival in a chic powder-pink trouser suit.

The Duchess of Cambridge is in on the act, too. Amid the sea of suits at Wimbledon, she was instantly spottable in a gorgeous candy-pink dress. She wore a dusky rose Chloe blazer to the Natural History Museum the other week, and a vivid cerise dress at last month’s G7 summit.

Actually, the summit had more shades of pink on show than a Dulux paint chart: Carrie Johnson in fuchsia; Jill Biden in hot pink; the Queen in bubblegum shades.

So in sync were they that one of my six daughters asked: ‘Did they co-ordinate?’

Of course not. This was simply a case of four great female minds thinking alike, a quartet of strong women knowing instinctively that, just because you’re on a male-dominated platform and surrounded by men in dull suits, it doesn’t mean you need to dress drearily to be seen as a high achiever in your own right.

This, I told my daughters, is what modern feminism really looks like. 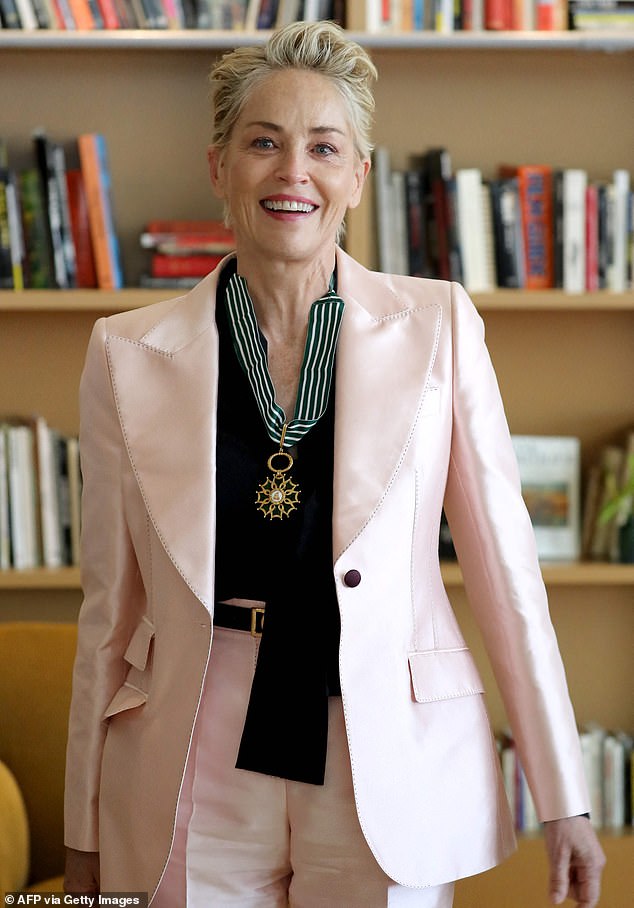 How far we have come. Thirty-odd years ago, when I started on New York’s Wall Street, the idea of wearing pink to work would have horrified me. Too frivolous, too flamboyant and far too feminine. Turning up to the office in pink would have felt like broadcasting that I wasn’t serious about the job. Instead, my wardrobe consisted of navy pinstripe trouser suits, strong-shouldered dresses and boxy jackets. My female colleagues all wore the same stern uniform.

At the time, we called it power dressing. But now I look back and flinch because actually, I see that we were just mimicking men instead of being powerful in our own way.

It’s a sign of real progress that the notion of women aping men’s stuffy dressing seems so old-fashioned now. These days I open my wardrobe to be greeted by pinks, oranges, yellows, reds and greens. I feel good just looking at them.

I stopped dressing like a man in my early 30s when I joined a smaller, highly progressive firm where my new male boss told me never to feel embarrassed about being a woman and a mother — I had one child then, and went on to have eight more. I was told, that’s what makes you special. The new firm welcomed the different perspectives that my life experiences provided. 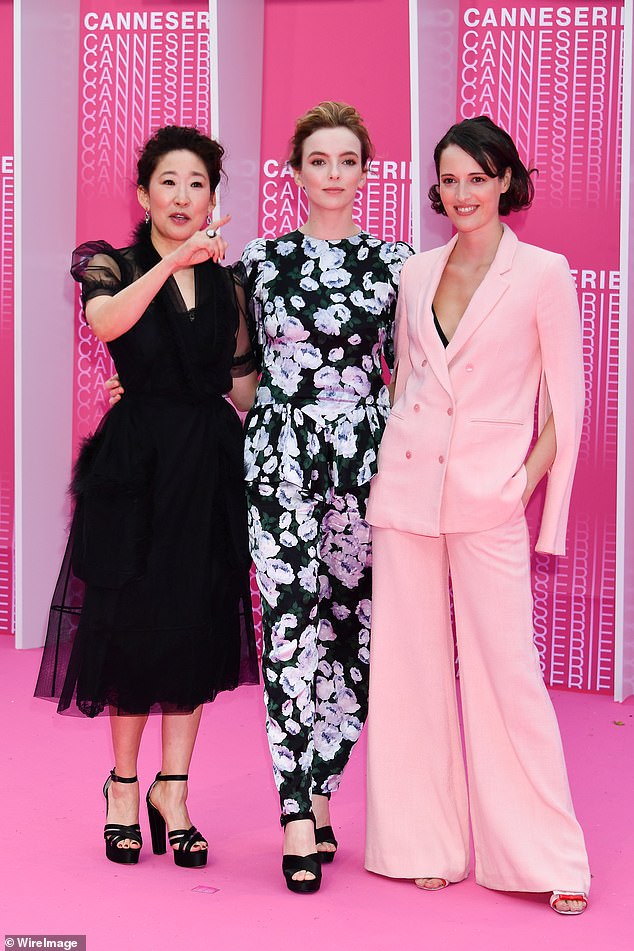 Helena said the first time she wore a pink dress to a high-powered meeting was in the States and she had learnt the advantages of standing out from the crowd. Pictured left to right: Sandra Oh, Jodie Comer and Phoebe Waller-Bridge

This gave me licence to dress how I chose. First, a brightly coloured scarf, then a pretty necklace or quirky heels, until eventually I was heading into the office wearing a bright pink dress.

I remember the first time I wore a pink dress to a high-powered meeting: it was in the States and attended by multiple CEOs (mostly men, of course).

By then, I had learnt that it could be an advantage to stand out from the crowd, even if it meant taking a deep breath before I entered the room.

I took a chance and it paid off. People came up to introduce themselves, and those I knew — both men and women — told me they loved the dress.

Over the years, I have learned that people have confidence in confident people. As I got farther into my style stride, feeling increasingly buoyed because I was wearing clothes that actually suited me, my career took off. There was nothing coincidental about that. 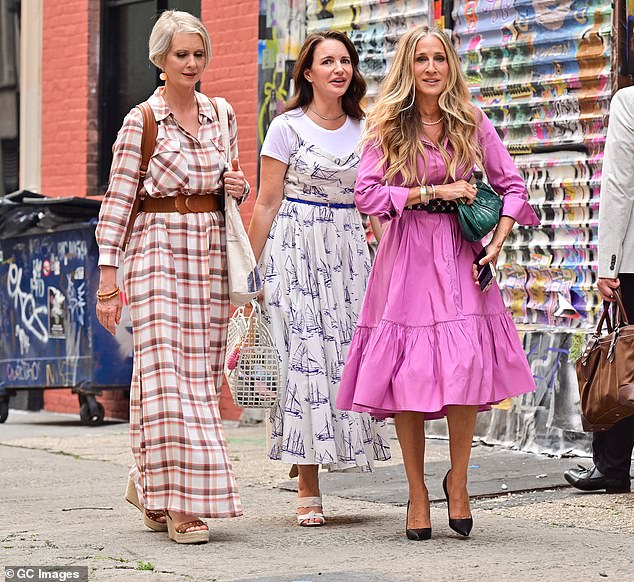 When I was shortlisted for the Veuve Clicquot Businesswoman of the Year awards in 2012, I wore a hot pink Roksanda dress, alongside the legendary chef Ruth Rogers, who wore coral. The worthy winner, accessories designer Anya Hindmarch, collected her award in a long floral dress.

I have also met many other impressive women who share the philosophy that pink is empowering: Sophie, Countess of Wessex, wowed in pink at a business conference where we were both speaking.

I firmly believe that being feminine and a feminist can be one and the same. Whether it’s an Emilia Wickstead evening dress, a bubblegum pink skirt suit or a fuchsia poloneck-and-cigarette-trouser look from Zara, pink is such an assertive colour. It says ‘I’m ready for anything’, whether you’re truly feeling it or not.

However daunting any of the incredible women I’ve mentioned might find the spotlight, they look every inch the part in pink. It’s a shade that demands attention, respect even — and has surely become feminism’s next great power play.