That was a quick change! Pippa Middleton sports a sunshine yellow frock at Wimbledon with her husband James – after a morning stroll with Baby Arthur

Pippa Middleton made a quick change into a sunny frock to attend Wimbledon with her husband – hours after she was spotted in a different outfit walking her two dogs with son Arthur in west London.

The Duchess of Cambridge’s younger sister, 35, opted for a sunshine yellow floral crêpe midi wrap dress from Ganni, which retails at £160.

She accessorised with a white beaded shoulder bag and strappy wedge heels, and kept her jewellery to a minimum, wearing just her wedding rings, a silver and gold watch and earrings.

Her husband James Matthews, 43, paid homage to her bright outfit with a yellow tie teamed with a pale blue shirt, a navy jacket and cream chinos.

Both sported stylish tortoise shell sunglasses – with Pippa keeping the same pair on she wore while on her morning stroll. 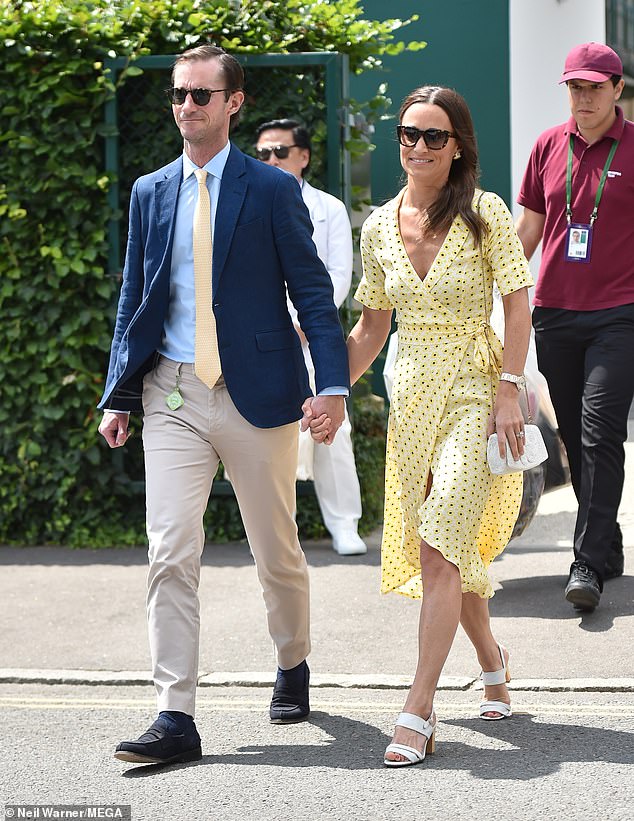 Pippa Middleton made a quick change into a bright yellow frock to attend Wimbledon, having been spotted this morning walking her dogs in west London 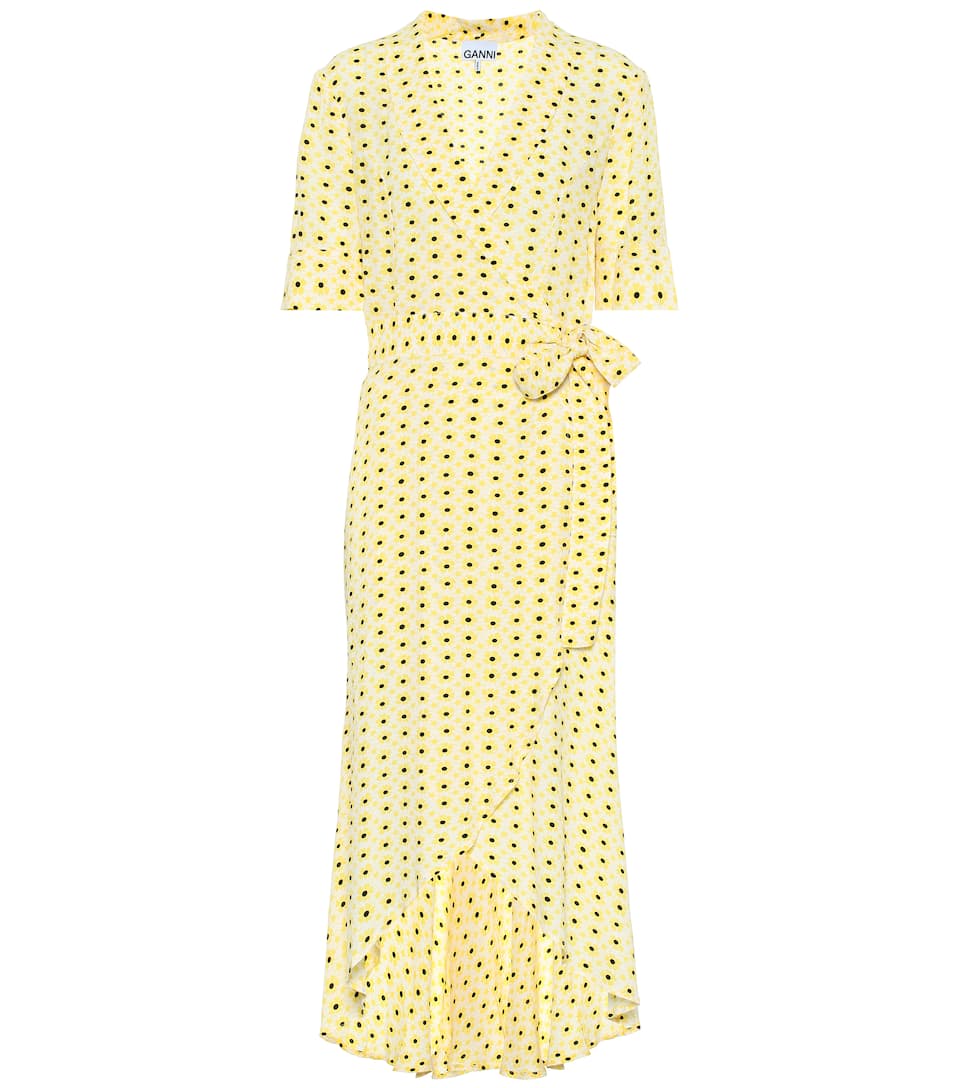 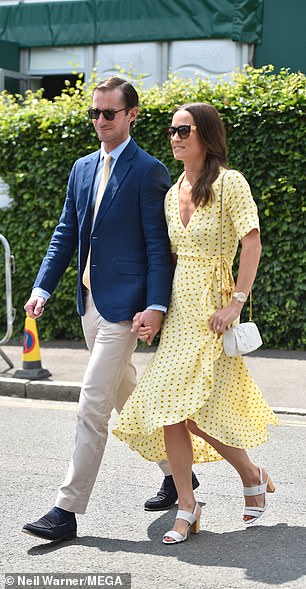 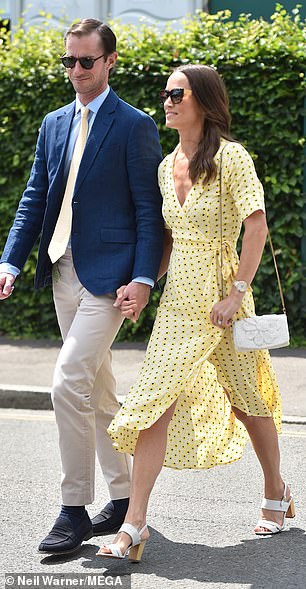 Pippa, who looked glorious in a bright yellow wrap dress with a pretty floral print, attended the Championships with her husband James Matthews 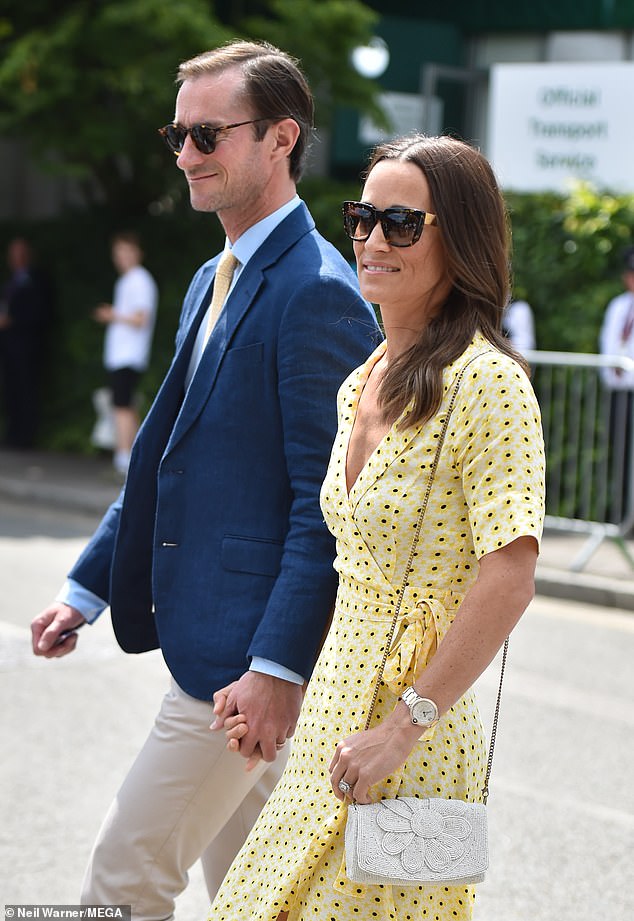 The pair took their seats in Centre Court to watch Novak Djokovic and Roberto Bautista Agut battle it out for a place in the mens singles final on Sunday.

The frock, which is now sold out, featured a pretty floral print, and the mother-of-one teamed it with stylish black espadrille wedges which looked similar to her sister Kate’s favourite beige pair.

Pippa looked relaxed as she expertly navigated the two dogs and her eight-month-old son’s pram along the pavements.

The socialite swept her brunette locks into a sleek ponytail, but later let them down for Wimbledon. 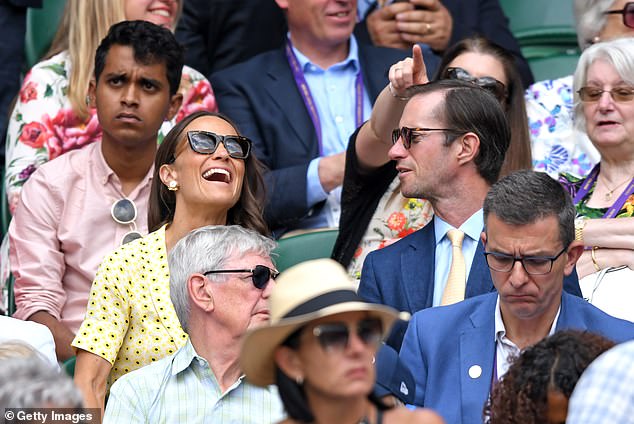 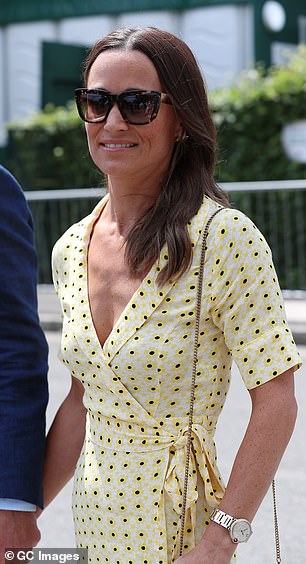 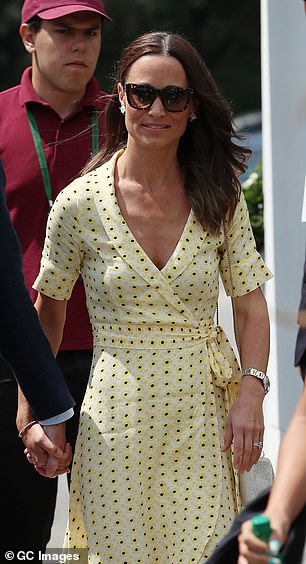 Pippa accessorised with a white beaded shoulder bag and strappy wedge heels, and kept her jewellery to a minimum, wearing just her wedding rings, a silver and gold watch and earrings 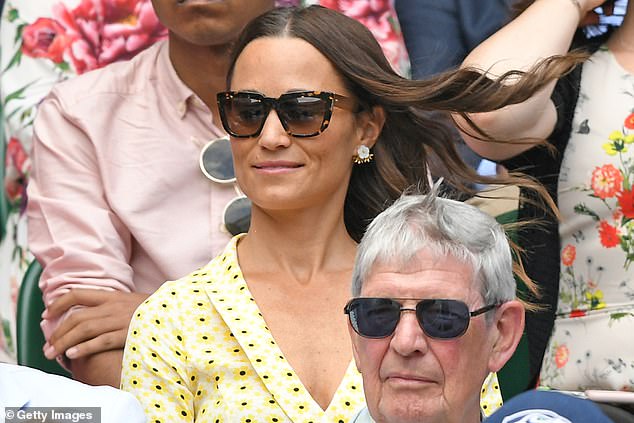 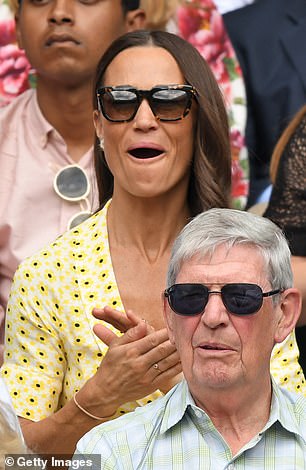 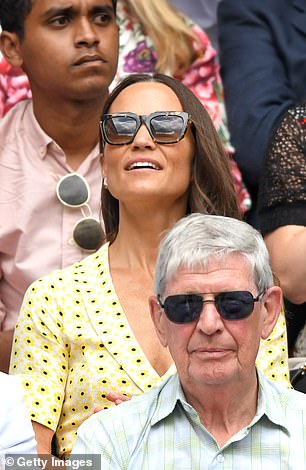 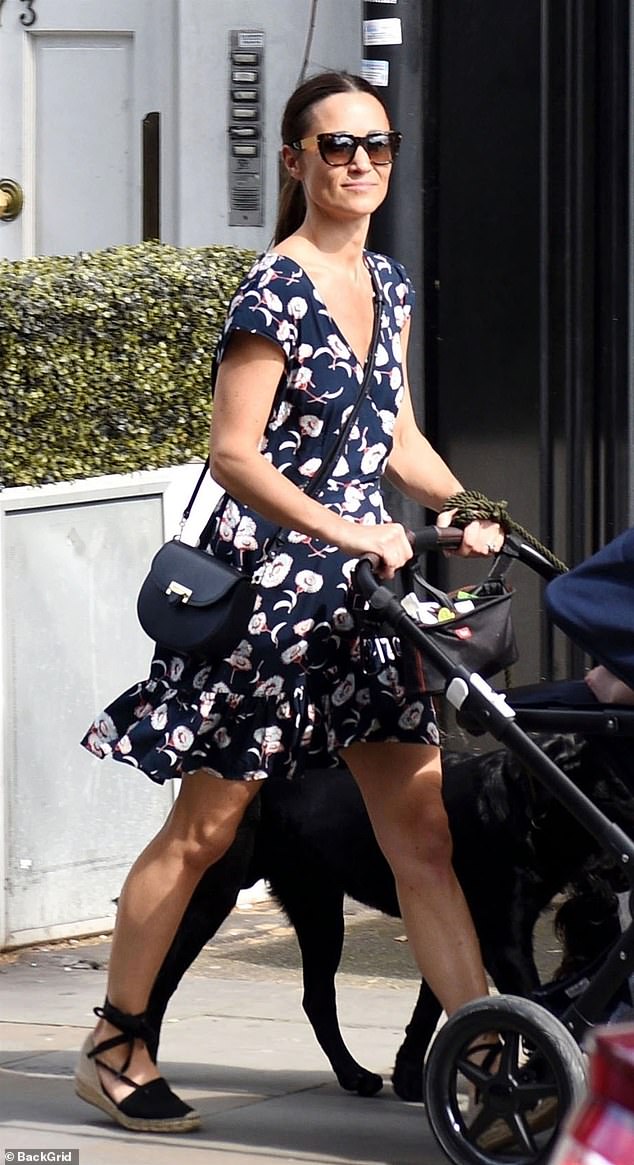 Pippa Middleton made the most of the sunny weather today, taking son Arthur and her two hounds out for a stroll in west London

The doting mum made sure Arthur was protected from the July sun with the navy blue pram hood pulled completely down.

Earlier this week we reported how Pippa appears to have taken style inspiration from sister Kate when it comes to dressing her baby boy.

She dressed her Arthur in red shorts and blue buckled shoes – similar to iconic outfits that both his cousins Prince George and Prince Louis have been pictured in. 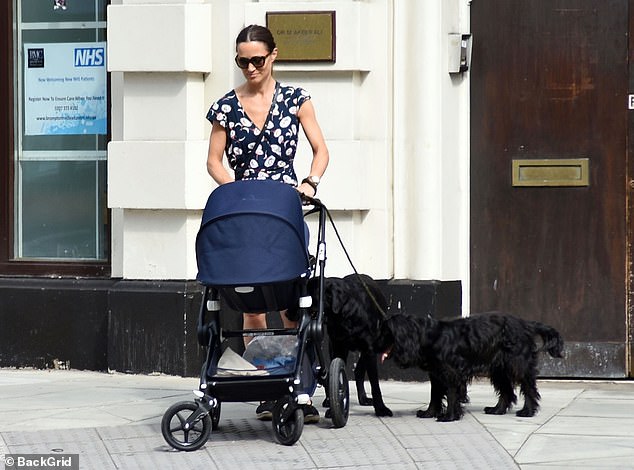 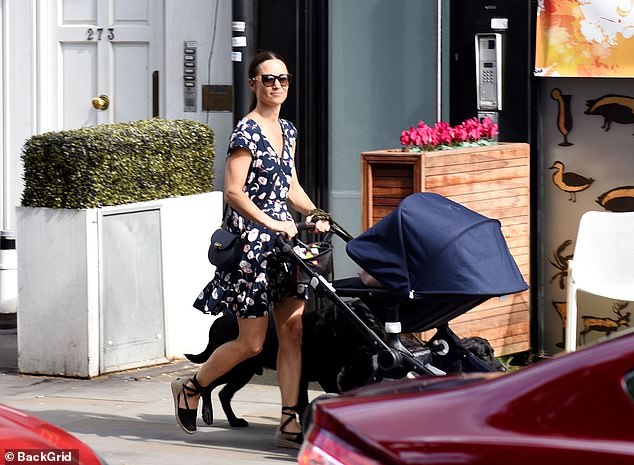 The doting mum, who is married to James Matthews, 43, made sure Arthur was protected from the July sun with the navy blue pram hood pulled completely down 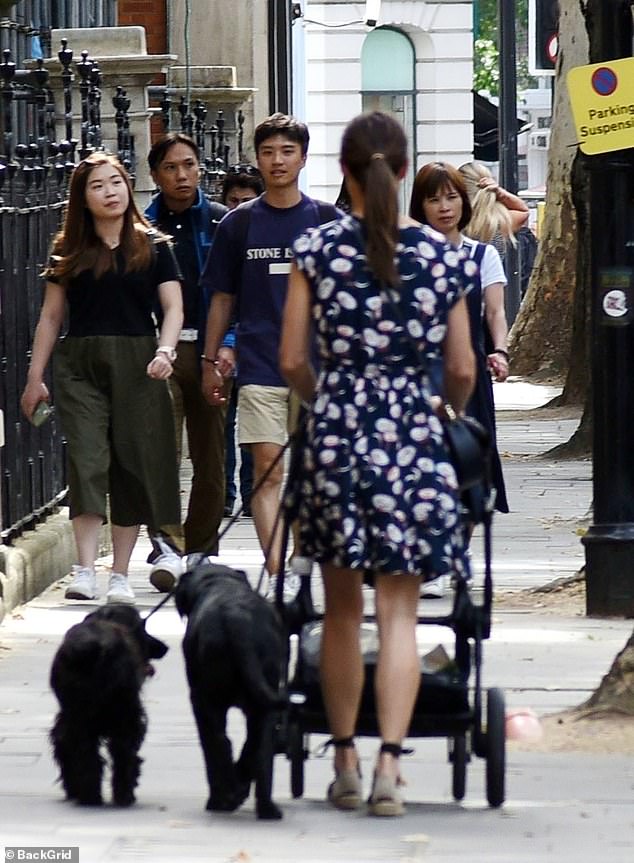 Pippa has kept a relatively low profile since giving birth to her son Arthur, but is often spotted taking a stroll around her local area

The Duchess of Cambridge dressed Prince George in red shorts and buckled shoes for his sister Charlotte’s christening back in 2015.

Kate’s fashion choices for George, Charlotte and Louis are always popular and sell out as soon as they’re pictured in it, showing her keen eye for fashion. 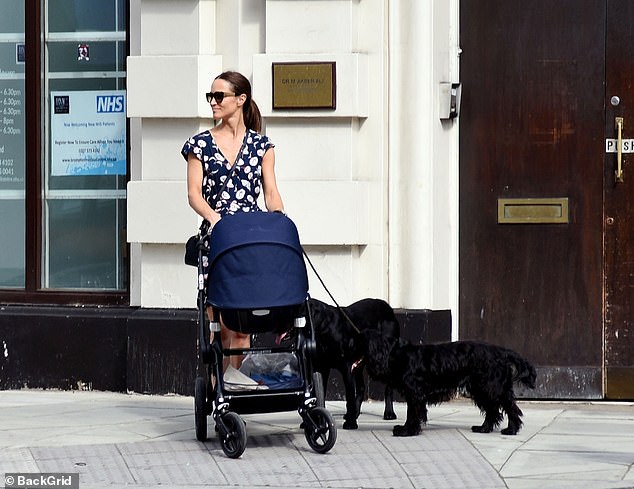 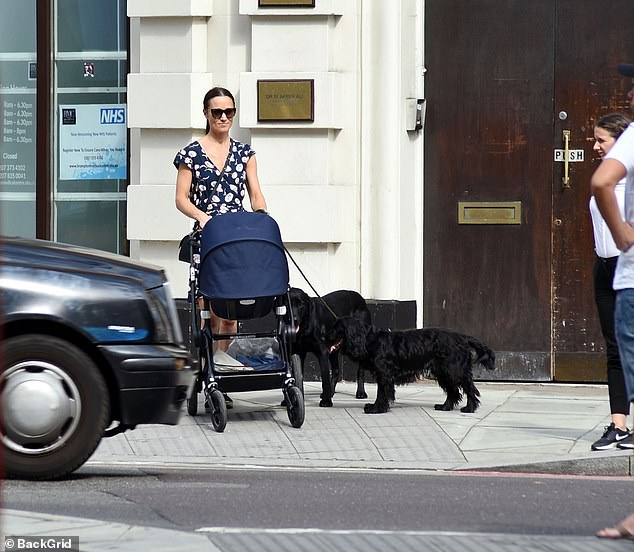 She attended the event with her brother James Middleton, and paired her chic dress with with a clutch bag and a pair of camel strap sandals.

Tomorrow her sister Kate will make a trip to the Championships with Meghan to cheer on Serena Williams in the ladies singles final.

The rare joint engagement was announced by Kensington Palace on Twitter this morning and comes a year after the pair made their first joint solo outing at the tournament.