Viral poet & artist Morgan Harper Nichols spoke to HL about the inspiration behind her new work & reflects on the last year of conversations & progress ahead of Juneteenth.

Last May and into June, a movement — not a new movement — could not be ignored any longer. Following the murders of George Floyd and Breonna Taylor, at the hands of law enforcement, the US erupted in protest and calls to end the systemic racism and inequality that has plagued the country for far too long. Ahead of Juneteenth, a holiday celebrating the emancipation of African-Americans who had been enslaved in the United States in 1862, Black mixed media artist Morgan Harper Nichols spoke to HollywoodLife about the “small areas of progress” made in the last year, while also commenting on the continued need for more conversations and work to be done.

“It’s definitely a mixture of feelings… I definitely feel like a lot of good conversations have happened, but also just simultaneously feel like we should be much further along by now,” the poet told HollywoodLife in an EXCLUSIVE interview. “I definitely live with that tension all the time. And, I think that is a tension that a lot of Black people and marginalized people in general deal with. You’re grateful to see small areas of progress, but at the same time, it’s like, this should not take this long. It should not be that complicated.”

Last year around this time, Morgan’s work served as a reminder to rest and take care of yourself in the midst of your fight for justice. “For me, it’s just been a lot of learning how to hold the tension of speaking, and, and taking action where I need to take action, but also giving myself permission to rest. And that’s something that is very hard for me to do,” she explained. “I would consider myself pretty educated on a lot of the matters that are being discussed — a lot of it just from personal experience, and a lot of times I feel that pressure of ‘well, it’s time to educate, it’s time to speak up,’ but you barely got any sleep last night and you’re actually tired. And you’ve actually as a Black person, have been talking about this stuff for years. Like, it’s okay to take a break. It’s okay to rest.”

“Do not think less of yourself if you can’t be fearless doing it. Afraid is just as brave,” one of Morgan’s pieces said on a June 5th post. Then, on June 19, 2020, she shared her poem, ‘To the Little One In Galveston’:

“When change finally comes,
it often comes long and slow,
and it might feel a little less like victory
and more like a winding road.
So if you start to lose your hope
under this blue, Galveston sky
and you don’t know where to run
or if it is safe to even try
remember: you were made to fly,
no matter what they say.
You are worthy of a life of freedom
without having to live afraid.

Fly little one, fly
lift your feet
lift your wings
be free.”

Morgan’s work, a mix of her personal doodles and drawings with her prolific thoughts about the world, her mind and even the mundane, has made its way from her personal Instagram feed and onto shirts, journals and into books. “I don’t think I’ve ever shared anything off the internet at all,” she laughed. “Social media, for me, became a place to try things out and for whatever reason I felt I could do this here, and I could always delete it.”

Now, Morgan’s book, How Far You Have Come, is available for the public to indulge in. This collection of her work was compiled in the midst of quarantine when there was literally no where to go, so instead, she reminisced on the place she has been. “I was looking through my phone’s camera roll and then looking at the actual map of the US, and I was like, there are so many places that I’ve been and I have traveled so many miles,” she told HL. “I thought, how cool would it be to create something that not only honored those places and honored everything that I learned in all those places, but hopefully, help others do the same for their own journeys.” 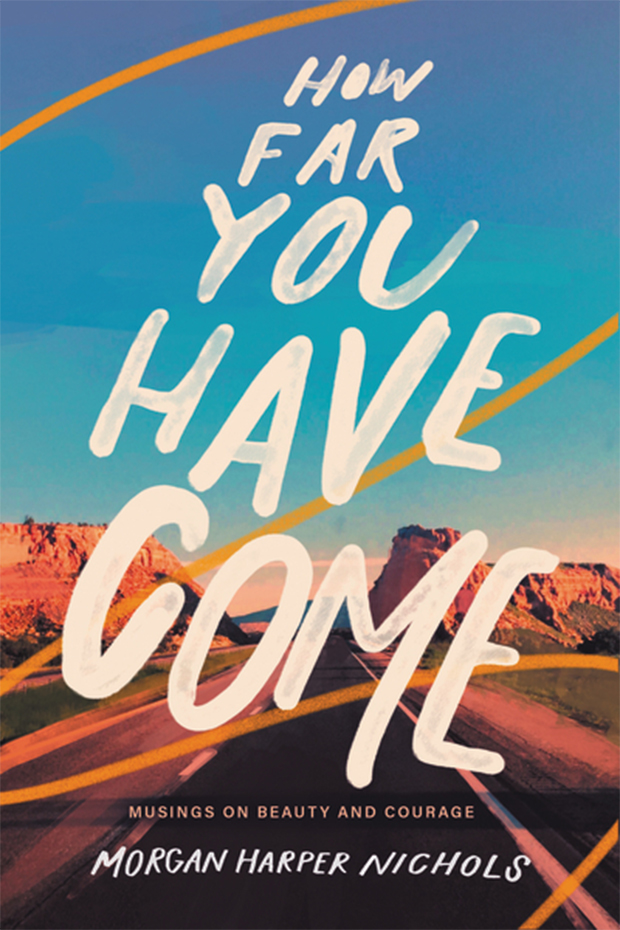