Royals on tour! Prince William and Kate Middleton will make their FIRST official visit to the Republic of Ireland for two days in early March

The Duke and Duchess of Cambridge will undertake their first official visit to the Republic of Ireland, Kensington Palace announced today.

Prince William, 37, and Kate Middleton, 38, will travel to the Emerald Isle from 3-5 March at the request of the Foreign and Commonwealth Office, according to a statement released on Instagram.

Details of the trip have not yet been confirmed but earlier reports suggest the couple could visit Dublin and Cork. 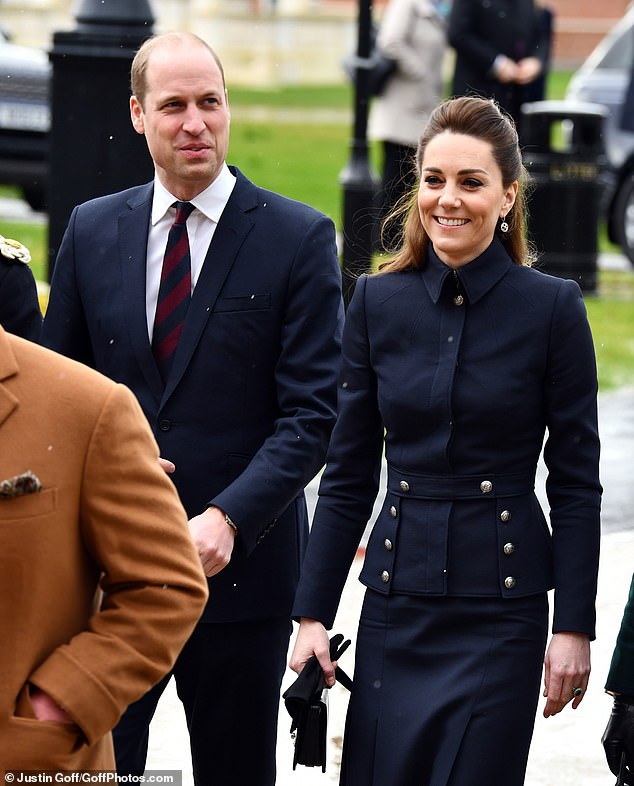 The Duke and Duchess of Cambridge will undertake their first official visit to Ireland, Kensington Palace announced today. Pictured, the couple in Loughborough today 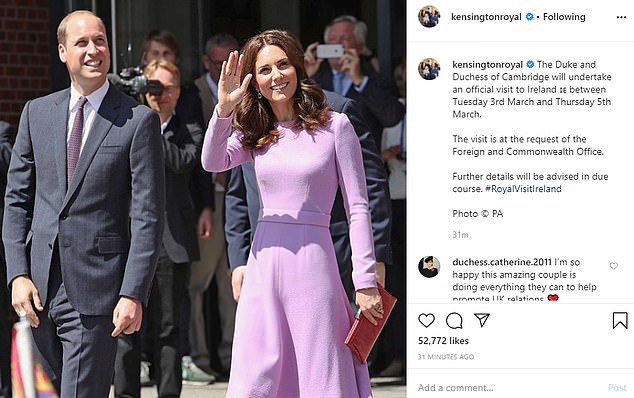 William and Kate will travel to the Emerald Isle from 3-5 March at the request of the Foreign and Commonwealth Office, according to a statement released on Instagram, pictured

William and Kate have visited Northern Ireland twice in recent years but this is their first visit to the Republic of Ireland.

The British Embassy in Dublin tweeted today: ‘We look forward to welcoming The Duke and Duchess of Cambridge to Ireland next month.’

In 2011 the Queen made history by becoming the first British royal to make an official visit to the country in 100 years.

Prince Charles and the Duchess of Cornwall have visited Ireland five times since 2015 while the Duke and Duchess of Sussex made a two-day trip in July 2018.

William and Kate are said to be particularly keen to go to Cork after the Queen visited the city’s English market on her 2011.

It comes as Ireland’s political parties enter into discussions to form a government after no single party secured a working majority. 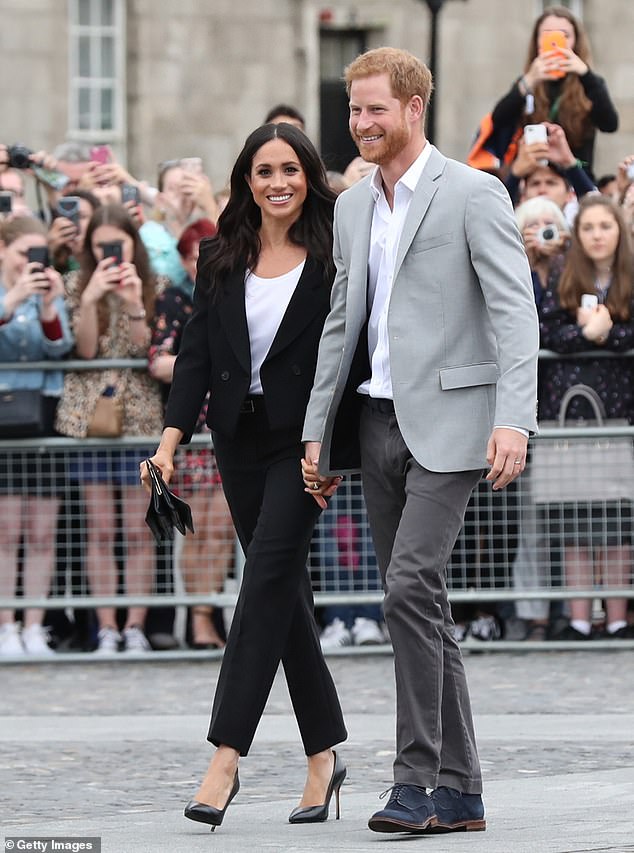 They will be following in the footsteps of Harry and Meghan who have visited the Emerald Isle. They are pictured at Trinity College, Dublin, in July 2018

Sinn Fein, which has historic links to the IRA, stunned pollsters by scooping up the largest share of first preference votes in Saturday’s ballot – but ended up with 37 seats to Fianna Fail’s 38 once back-up preference votes were taken into account.

Despite being Ireland’s largest party, the result will be a disappointment for Fianna Fail – one of Ireland’s two main governing parties – as it lost six seats compared to the result in 2016.

The result also spells disaster for current premier Leo Varadkar and his Fine Gael party which ended up with 35 seats, a loss of 15 which is likely to put an end to his leadership career.

Sinn Fein, meanwhile, is celebrating an historic triumph after picking up 14 seats which has seen the party complete its rise from fringe movement to potential leaders of the next government.

Party leader Mary Lou McDonald has made it clear on Monday that her goal is to become the next taoiseach – replacing Varadkar – and said she is in talks to ‘test’ the viability of a left-wing coalition without either of the two main parties.

END_OF_DOCUMENT_TOKEN_TO_BE_REPLACED

END_OF_DOCUMENT_TOKEN_TO_BE_REPLACED
We and our partners use cookies on this site to improve our service, perform analytics, personalize advertising, measure advertising performance, and remember website preferences.Ok