Thousands of small businesses hard hit by the coronavirus would get radically simplified pay rules in a plan that has emerged as a favoured option under consideration by the Morrison government.

Australia's largest companies and small businesses are each closing in on some of their top priorities in government-led industrial relations reform talks, but other employer organisations are feeling they may receive little from the months-long process. 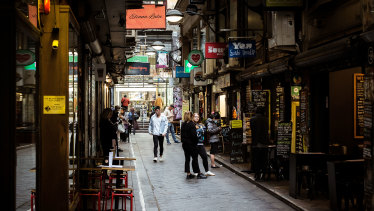 Small businesses such as cafes would benefit from award changes firming as a leading option from industrial talks.Credit:Getty

Under a proposal for small businesses, employers in sectors including hospitality and retail would be allowed to pay their staff a single higher "loaded rate" rather than having to calculate a multitude of pay rates, penalties and allowances for everything from late night shifts to uniforms.

The proposal could help reduce the risk of unintentional underpayment, common in the hospitality sector, and would come under a small business provision appended to industry awards.

Its advocates say it would also make employers less wary of hiring new staff as the coronavirus pandemic eases but others argue it would discourage businesses from taking on staff above the small business threshold, which could be as low as 15 people.

Sources involved in the working groups, who spoke on the condition of anonymity because the talks are confidential, said the proposal had received a favourable reception from Industrial Relations Minister Christian Porter, who is leading the process.

Mid-sized and large employers will not benefit from the award changes, meaning they will have to negotiate with unions on enterprise agreements if they want similar simplified rules.

A proposal to make it easier to approve those agreements has won joint backing from the Australian Council of Trade Unions and the Business Council of Australia, which represents the country’s largest companies including Coles and McDonalds.

Under the plan unions would act as a safeguard to ensure workers are not being ripped off. Deals they back would get a fast-tracked approval process through the Fair Work Commission.

That proposal sparked a furious backlash from four other employer groups, which spent Thursday writing an open letter to Mr Porter outlining their concerns the proposal puts pressure on workers to join unions and gives them power disproportionate to their membership.

Whether simplified pay will help workers will depend on how high the small business loaded rate is compared to the penalty rates and allowances that would otherwise be earned, and if unions can extract concessions in enterprise agreement negotiations.

Exactly how many employees a business could be allowed under the small business provision and which industries it would apply to are being discussed in the working groups. Mr Porter asked at a meeting whether a threshold of 15 or 20 employees would be appropriate, a source said.

Offering something for small businesses as well as the largest employers would give the Morrison government a powerful argument when it presents the outcome of the working groups to the Senate crossbench, sources in the working groups said.

The small business proposal has left some employer representatives unhappy because they want the flexibility to benefit all businesses regardless of size. One said it would be a "failure" because it "pits small operators against large operators".

"Surely regardless of whether an employee is working for a small business or a big business, a job created is a job created," the source said.

Another employer disagreed: "Small businesses don't have resources, big businesses do and that's why the change has got to come," they said.

Versions of the small business award are being pushed by the Council of Small Business Organisations of Australia and the small business ombudsman. Mr Porter declined to comment on specific discussions in the working groups but said they remained focussed on creating jobs.

"It should be no surprise to anyone that there would be different points of view on certain issues amongst participants of the working groups – if there wasn't there'd be no need for this in the first place," Mr Porter said. "Indeed the differences of views are not just between unions and employer groups – they are sometimes inside those organisations."

Get our Morning & Evening Edition newsletters

The most important news, analysis and insights delivered to your inbox at the start and end of each day. Sign up to The Sydney Morning Herald’s newsletter here and The Age’s newsletter here.