Australian Red Cross Lifeblood is considering changes to allow more gay and bisexual men to donate plasma, but equality advocates are pushing for all blood donors to be screened on their sexual activity.

Men and transgender people who have sex with partners designated male at birth are not allowed to donate blood unless they have been celibate for three months and Just.Equal Australia says it is time for this to change. 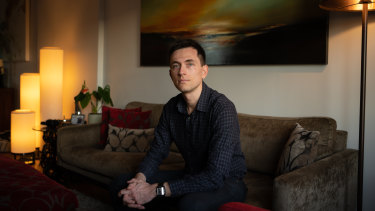 Thomas Buxereau wants to be able to donate blood.Credit:Flavio Brancaleone

“I’ve been with my husband for 12 years, and I just don’t understand why my blood would be deemed as unsafe,” Thomas Buxereau, from the advocacy group’s Let Us Give campaign, told The Sydney Morning Herald and The Age.

“I’m receiving emails weekly from Lifeblood, urging me to donate and detailing how the blood supplies are low and that ‘every drop counts’ … It’s extremely frustrating and hurtful.”

“It stigmatises gay men as a threat to public health, and that kind of stigma really belongs in the past,” Croome said. “It makes no sense that two men can get married, but we still have this policy.”

Let Us Give will launch a campaign on Tuesday, World Blood Donor Day, to replace the abstinence rule with an individual risk assessment, following the lead of countries like Canada, France the United Kingdom and the Netherlands.

Dr Sharon Dane, a social psychologist who has researched same-sex relationships, said asking every donor this question would ensure that Red Cross Lifeblood could “get us as much safe blood as possible” while avoiding “banning a whole group of individuals because their risk is slightly higher”.

“The vast majority of gay men do not have HIV, and some people engaging in heterosexual sex do have HIV,” she said.

The NSW Kirby Institute’s most recent HIV surveillance report found that male-to-male sex accounted for 67 per cent of HIV notifications in 2020 with 426 cases, compared with 155 from heterosexual sex (24 per cent).

Dr Dane said while gay men were at higher risk, the overall numbers in both groups were low and men who had sex with men were more likely to get tested regularly.

A spokeswoman for Australian Red Cross Lifeblood said the organisation was committed to making it easier for more people to donate but research did not support a move to individual risk assessment in Australia.

“We understand these rules exclude some groups … We hear the hurt, frustration, and the anger,” the spokeswoman said. “We’re exploring whether it may be possible to further reduce the three-month waiting period for plasma donations, [which] undergo processing that reduces the risk of possible infections.”

Plasma is the liquid component of blood and is used to make immunoglobulin, given intravenously to help people with cancer or weakened immune systems fight off infections, and albumin, used to treat or prevent shock following serious injury, bleeding, surgery, or burns.

Croome said changing the rules applying to gay and bisexual men for plasma donation alone “won’t substantially increase the amount of safe blood available or eliminate discrimination” and was an approach Canada had rejected.

In April, the Therapeutic Goods Administration approved Lifeblood’s request to lift the ban on almost 750,000 people donating blood after living in the United Kingdom for six months or longer, put in place due to concerns about the impact of the country’s “mad cow” epidemic.

Australia has just over half a million active blood donors which equates to about 3.5 per cent of the population and Lifeblood is urging more eligible people to donate as the coronavirus pandemic and NSW floods have affected supply.

In April, the service issued a warning that supply had dropped dangerous low, with only 1.5 days worth of the universal blood type O negative and 1.9 days of other blood types available.

Let Us Give estimates that individual risk assessment of blood donors would enable an additional 13,542 people to donate and source an extra 25,459 litres of donor blood per year, enough to save up to 162,504 lives.

Health Minister Mark Butler said Lifeblood would need to make a submission to the TGA if it wished to make further changes to blood donation rules.