Princess Leonor and Sofia of Spain joined their parents Queen Letizia and King Felipe as they visited their grandfather in hospital in Madrid today.

The young princesses Leonor, 13, and Sofia, 12, smiled for the cameras before heading into Quirónsalud Madrid University Hospital to offer their well-wishes to Juan-Carlos I, 81, who is recovering from heart surgery.

Queen Letizia, 46, who was also accompanied by husband King Felipe, 51, donned a white button down shirt and checkered trousers – and completed her outfit with a pair of casual  white trainers.

Palace officials said that the operation was arranged following a check-up in June and indicated that it was not an urgent procedure. 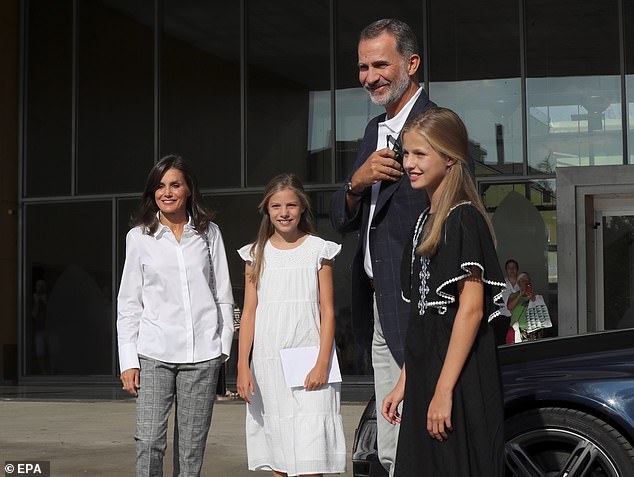 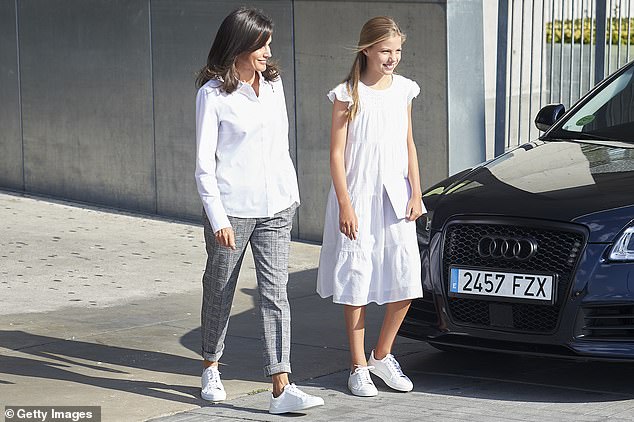 Leonor, who will one day be the Queen of Spain, and her younger sister, are largely protected from the limelight by their parents and make just a handful of appearances throughout the year.

They are usually photographed ahead of the family’s annual summer break, and occasions such as Easter Sunday.

Leonor donned a pretty black dress with floaty sleeves and white detailing for the occasion.

The teenager paired her smart midi-dress with a pair of cool white Converse trainers. 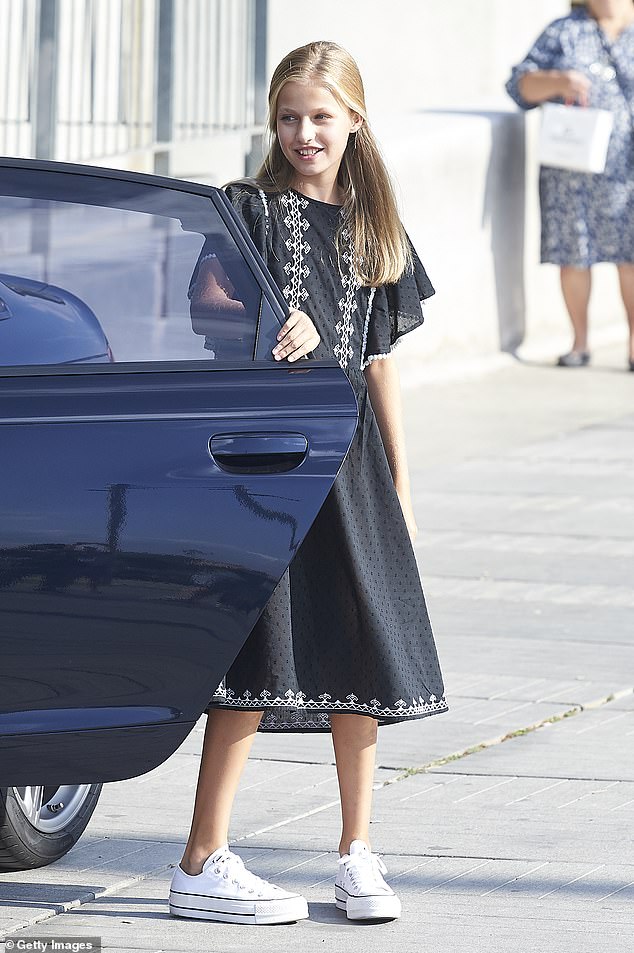 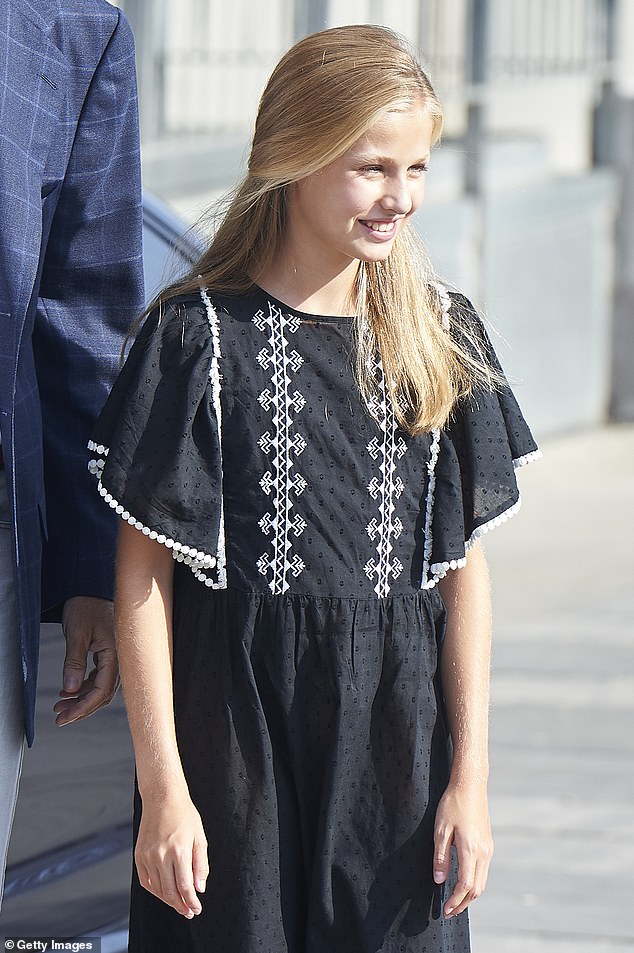 The 13-year-old smiled at photographer as she joined her father on the visit, sweeping her dark blonde hair back off her face 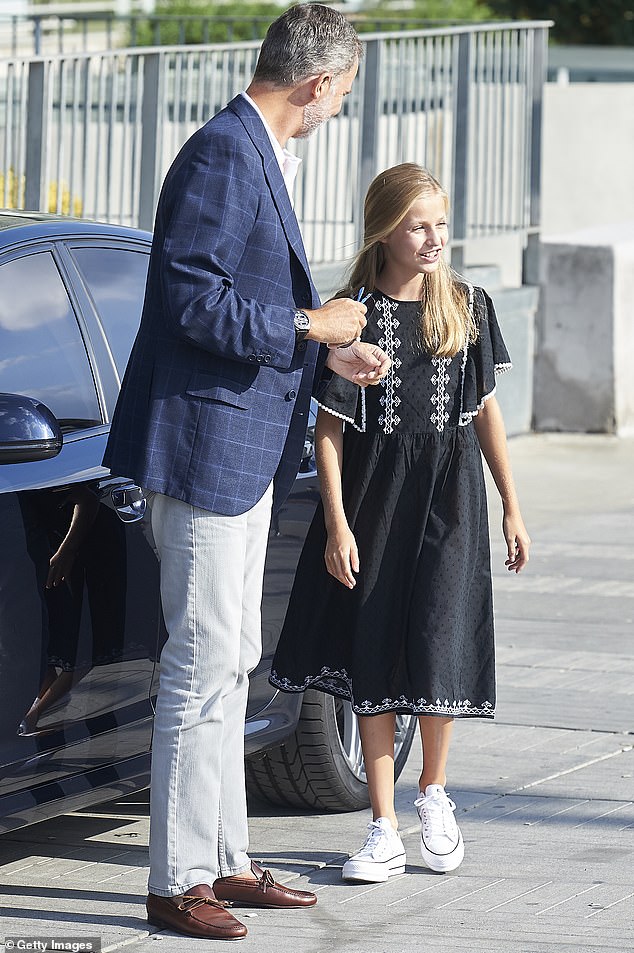 The princess paired the smart black dress with a cool pair of trendy white Converse trainers. Pictured with King Felipe VI of Spain

Meanwhile, younger sister Princess Sofia opted for a midi-length floaty white gown and appeared to carry a small white book into the building.

Both girls swept their dark blonde hair from their face in near identical styles, pinning it back in half-up dos.

While Letizia kept her locks well-coiffed and sported a minimal make-up look, husband Felipe donned a smart navy blazer with a pair of light-coloured jeans.

Lucia Alonso, the managing director of Madrid’s Quironsalud University Hospital, said on Sunday that the 81-year-old king emeritus is awake and breathing without support. 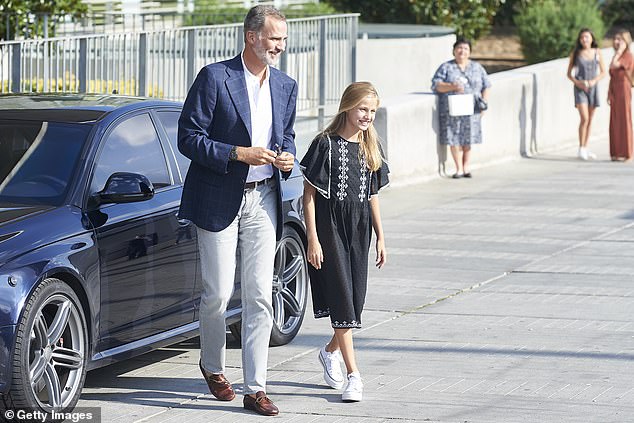 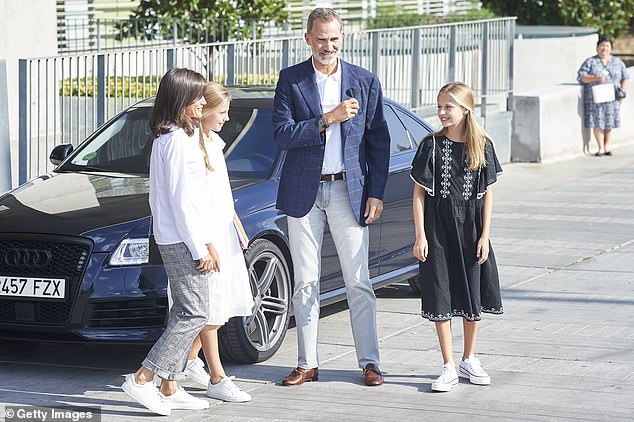 He added Juan Carlos is sitting up in bed and ‘is in good spirits.’

The triple bypass procedure Saturday was scheduled after the former king had a checkup two months ago. The hospital said the operation was successful and without complications.

Juan Carlos abdicated in 2014 in favour of Felipe, ending a near 39-year reign. He retired from public duties last May.

Arriving at the clinic late on Friday the King told reporters: ‘You’ll see me on the way out’. 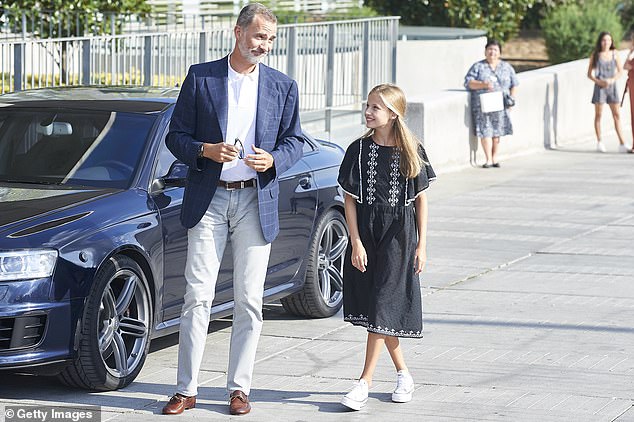 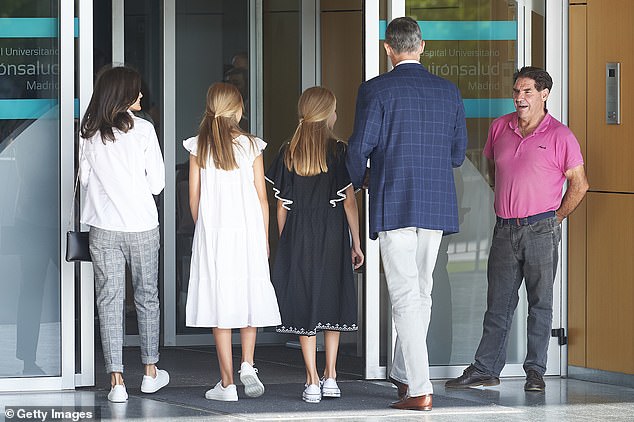 The family seemed relaxed as they headed into hospital earlier this afternoon. Pictured, Queen Letizia of Spain, Princess Sofia of Spain, King Felipe VI of Spain and Princess Leonor