Rachel Griffiths grew up with art. She trailed her mother, Melbourne artist, Anna Griffiths, around galleries. As a teenager, she fell in love with Joy Hester, “the Sylvia Plath of Australian art”, marvelling at her sketches during a school visit to the National Gallery of Victoria. Her year 12 portfolio is full of portraits of her friends. She married an artist, Melbourne printmaker, Andrew Taylor. Griffiths might, at a great cost to the big and small screens, have pursued a career as an artist, if something hadn’t held her back. 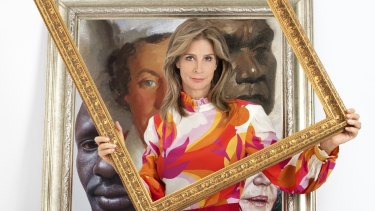 “I knew I couldn’t compete with my mother!” she says. “She’s an extraordinary maker and beautiful drawer. So I think I went into the performing arts because I thought, ‘I’ll never be as good as my mother!’”

The Oscar-nominated actress brings this lifelong passion to her role as host of the ABC’s Finding the Archibald, a three-part series celebrating and dissecting the national portraiture prize in its centennial year. Alongside Art Gallery of NSW curator, Natalie Wilson, who is compiling an exhibition of 100 (not necessarily winning) portraits from more than 6000 finalists, Griffiths sets herself an even more formidable task – choosing just one Archibald finalist that might represent the face of Australia 100 years from now.

“It’s much less about the changing face of Australia, although the centenary exhibition will certainly do that, it’s how [the prize] has changed how we see ourselves and how we project that image to the world. Ultimately, I think my journey is to pinpoint the portrait that speaks to shifts in our national identity.”

Her quest takes her into the studios of artists (Ben Quilty, Vincent Fantauzzo, Abdul Abdullah, Wendy Sharpe, Vincent Namatjira), and the homes of sitters (Asher Keddie, Wendy Whiteley, Deng Adut, John Howard). She also meets with miniaturist Natasha Bieniek, whose portrait of Griffiths is a 2021 finalist.

“I think there’s a special place in purgatory where celebrity portraits go to die,” laughs Griffiths. “Who wants to live with a giant portrait of an actor? I think my portrait is the size of two iPhones. It’s absolutely tiny. I chose Natasha because there is a truth to her work. We started a week after Melbourne came out of the 111-day lockdown. We were both in this very domestic mindset. I think the portrait captures a shared understanding of that moment in time of being home with our children, within the safety bubble, for a very long period of time.”

Along with the controversies (William Dobell’s 1943 mould-breaking portrait of artist, Joshua Smith; the two years that the judges refused to award a prize at all; the question of photograph versus live sitter), the series charts the evolution of the art form, from literal likenesses of “distinguished” white men by a white men, to a much wider and more inclusive interpretation.

“In this country we are still enamoured with a muscularity of paint, with the legacy of the action painter. The masculinity of the guy who can really layer up his palette knife and smear it across the canvas.”

Griffiths is “not putting down men with loaded palettes. I love Nicholas Harding and I love Ben Quilty,” but she feels there is space for other, specifically feminine approaches.

“Many women artists, if they have families, seem to paint in a style where they can leave the painting, go and make dinner, put the kids to bed and go back to work. And they paint small. Natasha paints with one hair. Thea Perkins is very young. Her work is small and intimate – what you’d expect a young artist can afford to do … I think there’s an unconscious bias towards this obsessive muscularity, where you have to finish the canvas before the paint dries. It’s a race that men have always won.”