Margaret Josephs called out Teresa Giudice for letting men “treat her like s—t” on Tuesday night’s episode of “The Real Housewives of New Jersey.”

The comment came at Josephs’ birthday party for her mother, Marge Sr., while discussing Giudice’s recent attack on “friend of the Housewives” Traci Johnson. (Giudice was not in attendance.)

As viewers will recall, Johnson’s husband, Tiki Barber, previously asked Giudice’s fiancé, Luis “Louie” Ruelas, about reports that he had been allegedly abusive in past relationships.

At Marge Sr.’s celebration, Catania, 51, chimed in to say that her longtime pal “doesn’t fight with men.”

“Making excuses for her does not help her,” Josephs, 54, then said, to which Catania replied, “I’m not making excuses. It’s an explanation.”

That’s when Josephs slammed Giudice for what she considers a pattern of questionable relationships with men.

“She puts men on a pedestal, even men that treat her like s—t, she puts on a f—king pedestal,” she said, mentioning Giudice’s ex-husband, Joe Giudice, as an example.

Teresa missed out on 11 months with her mother, Antonia, who died less than two years after the OG “Housewife” was released from prison in 2015. Teresa and Joe Gorga’s father, Giacinto, passed away in April 2020. 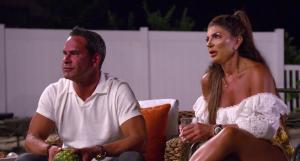 The “RHONJ” cast has largely pinned Teresa’s sentence for mail, wire and bankruptcy fraud on her ex-husband, 49, who also served time and has since been deported to his native Italy. (He frequently spends time with his children in the Bahamas.)

Meanwhile. Page Six exclusively reported in April 2021 that Ruelas’ ex-fiancée Vanessa Reiser filed legal action against him when their relationship ended in 2020, claiming he would become enraged if they didn’t have enough sex. The lawsuit was eventually settled out of court for undisclosed terms.

That same month, a police report obtained by Page Six revealed that Ruelas, 46, was charged with simple assault following a road rage incident in August 2018.

“The Real Housewives of New Jersey” airs Tuesdays at 8 p.m. ET on Bravo.