Madrid: Anthony Albanese will tell a leading global policy forum that developed nations must lift ambitions on tackling climate change and ensure they bring their poorer neighbours along with them if the world is to rise to the challenge.

The Australian prime minister will address the council of the Organisation for Economic Co-operation and Development (OECD) in Paris on Thursday evening AEST, signalling to the global community that his government has the “political will” to prioritise new clean energy industries and unlock green trade and investment. 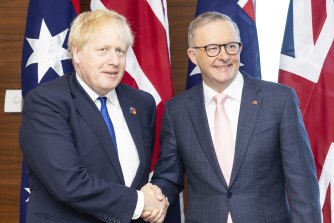 Anthony Albanese met with British Prime Minister Boris Johnson for the first time since coming to office, while in Madrid for the NATO summit, where the pair spoke about the climate challenge ahead.Credit:Alex Ellinghausen

Putting the blame for rising energy and food costs on Russia’s invasion of Ukraine, Albanese will tell the meeting that it is critical for like-minded countries to seek solutions to urgent challenges by promoting open economies and boosting productivity to combat high inflation and kick-start economic growth.

In a draft copy of the address circulated by his office, Albanese confirms he will legislate Australia’s increased Paris climate target of cutting greenhouse gas emissions by 43 per cent over 2005 levels over the next eight years.

He says “new frontiers” of opportunity lay ahead in green technologies but the world’s leading economies “must keep raising our ambitions”.

“As a nation blessed with an abundance of the resources needed to make clean energy, Australia has an unmatched advantage to be a world-leader in its production,” he will say.

“We’ve got the natural resources, the workforce, the scientific ingenuity, the global networks and the industry expertise.”

He will tell the council that Australia would also provide finance and infrastructure funding to support its global partnerships, especially with Australia’s southeast Asian and Pacific neighbours, while delivering on a secure and reliable supply of critical minerals essential for green technologies.

Albanese argues finding and supporting practical initiatives will be critical for achieving the scale, diversity and security of clean energy supply chains necessary for our collective emissions reduction goals.

“I firmly believe we can solve the biggest challenge of our time, while laying the groundwork for long-term economic security and shared prosperity,” he will say.

“Australia will always do our part … we will continue to engage with the international community to promote and protect our way of life.”

In Madrid for the NATO summit on Wednesday, Albanese met with British prime minister Boris Johnson for the first time since coming to office, where the pair spoke about the climate challenge ahead.

A Downing Street spokeswoman said Johnson welcomed Australia’s enhanced climate targets and the leaders agreed Australia had “incredible potential” to be a world-leader in the use of renewables and make the “hyper leap away from coal and other fossil fuels”.

She said the pair also agreed on the need to help developing countries grow in a clean and sustainable way.

Albanese is banking on Australia’s renewed efforts to combat climate change to improve relations with European leaders and reset stalled trade negotiations with the European Union. Critical to this will be a meeting with French President Emmanuel Macron on Friday evening AEST, who will need to add his political clout to an agreement that threatens to be derailed by a growing anti-trade sentiment within the 27-member bloc.

In an earlier speech to NATO leaders at a critical summit, Albanese told counterparts, including United States President Joe Biden, that Australia shared a common purpose with NATO, in supporting “democracy, peace and security and upholding the rule of law” in the Indo-Pacific region and further afield.

The summit, while dealing with Russia’s actions in Ukraine, also sounded a warning about Beijing’s ever-closer ties with Moscow.

Beijing is to be labelled “a challenge to our interests, our security, and our values” when NATO’s 30 leaders agree on the alliance’s “strategic concept” up to 2032.

Albanese said that by supporting peace and sovereignty in Europe, Australia was underscoring its iron-clad commitment to those norms in the Indo-Pacific.

“We recognise there is strategic competition in our region, and Australia is not afraid to stand up with all the countries of our region for an open, inclusive, and prosperous Indo-Pacific,” he said.

“Under my government, it will be through Australia’s actions that you will see our resolve. We will deal with this issue in a mature way, with firmness and resolution.”