RICHARD LITTLEJOHN: Why should we go easy on Islamist killers? Singer Morrissey rejects the ubiquitous ‘turn another cheek’ response. And quite right, too

The name of the Islamist terrorist who murdered two people at Fishmongers’ Hall in London has been removed from an official report because it might incite a ‘Far-Right’ backlash.

Members of Staffordshire Safeguarding Overview and Scrutiny Committee, looking into how future such attacks could be prevented, decided identifying the cold-blooded killer would be dangerously provocative.

They agreed with Councillor Gillian Pardesi, who said: ‘Mentioning the name of this person, who happens to be of Pakistani descent, further demonises the Muslim community and embeds in people out there a stereotypical profile of what an extremist is.’ She claimed it would only lead to a rise in ‘hate crime’ and maintained that we now face a greater threat from the ‘Far-Right and neo-Nazis’ than from Islamist fanatics. 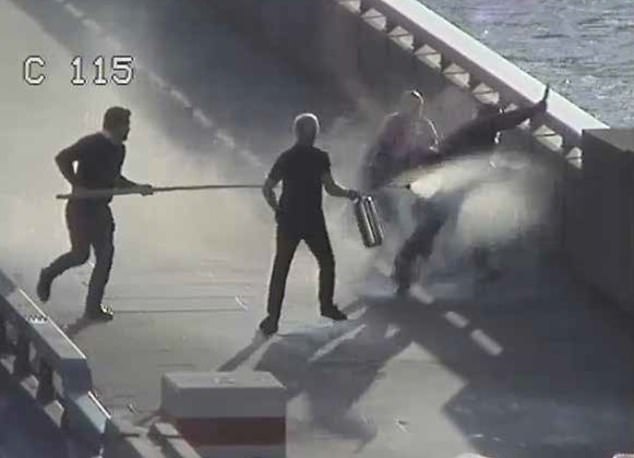 In fairness, that puts her on the same page as Britain’s senior anti-terror cop Neil Basu, the late George Floyd’s bestie, who mercifully failed to become the new Commissioner of the Met.

But it does give yet another depressing insight into the official mindset when it comes to downplaying Islamist atrocities, especially on British soil.

This isn’t just confined to pusillanimous politicians, the Guardianistas who run the justice system and the Home Office, or the officer class at Scotland Yard, all brainwashed by the Left-wing freemasonry Common Purpose.

It now extends throughout every branch of government and so-called ‘public service’, including Staffordshire council. For the record, the wannabe jihadist who knifed to death two idealistic young social workers at a prisoner rehabilitation scheme in London in 2019 was called Usman Khan.

You may remember him being chased on to London Bridge by members of the public, armed with a fire extinguisher and a whale tusk, before being shot dead by police.

So what, you might be wondering, has any of this got to do with Staffordshire council? Turns out Khan grew up in Stoke-on-Trent, before dropping out of school and joining hate preacher Ram Jam Choudray’s terrorist recruitment agency Al-Muhajiroun. 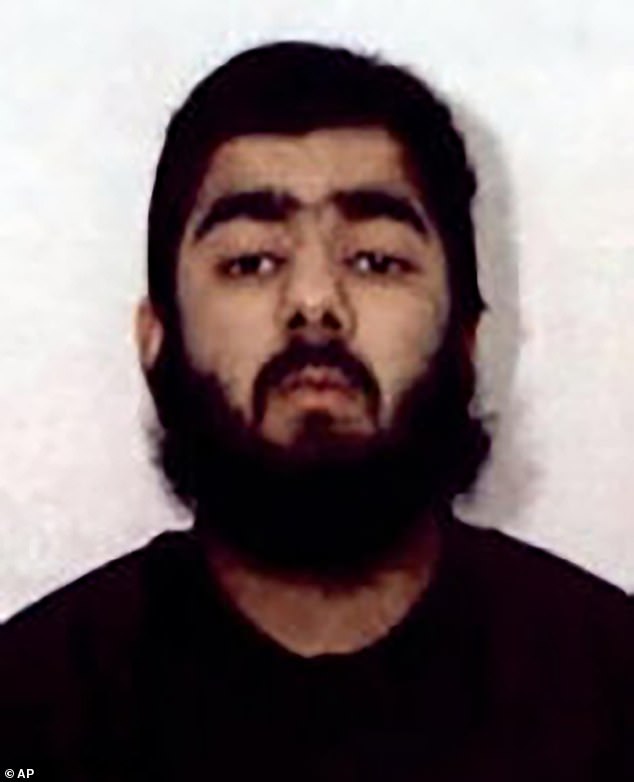 Usman Khan was imprisoned six years for terrorism offences before he was released. He went on to stab several people in London on November 29 2019 before being tackled by members of the public and shot dead by officers on London Bridge

He was one of a group of men who pleaded guilty in 2012 to a number of terror offences, including planning to bomb the London Stock Exchange.

Long story short, after serving just half of a 16-year sentence, he managed to convince the authorities that he was a reformed character. They sent him on a rehabilitation course at Fishmongers’ Hall, with deadly consequences.

Naturally, they’d rather we forget about all this. Just like every other Islamist-inspired atrocity, the official line is: Move along, nothing to see here.

So they repeat ad nauseam that Islam is a religion of peace and shift the narrative to talking up the imminent threat of a ‘Far-Right’ backlash, which never seems to materialise.

Look, I’ve never doubted that the overwhelming majority of British Muslims are as horrified by this murderous behaviour by their co-religionists as the rest of us.

So why would they feel threatened by naming the guilty men, like any other criminals? To be honest, I couldn’t have told you off the top of my head that he was called Usman Khan. Apparently, he also answers to Abu Saif.

Then again, I couldn’t tell you the names of any of the 7/7 bombers, who brought carnage to London. Or the Islamist nutjobs responsible for a multitude of other terror attacks in Britain.

Whether they have been deliberately suppressed, or simply forgotten, is a matter for debate.

But while few of us could identify the Islamist who stabbed to death Tory MP David Amess just over a year ago, most people are familiar with Yorkshire Ripper Peter Sutcliffe; ‘Dr Death’ Harold Shipman; and Moors murderer Ian Brady. Is it because they trip off the tongue more easily? Or because the authorities are determined to ensure we don’t dwell on the ethnic and religious heritage of Islamist killers?

So I was intrigued to read recently a powerful column in The Spectator magazine by journalist Brendan O’Neill. He was reviewing a concert at the London Palladium by Morrissey, former lead singer of the 1980s Mancunian indie band The Smiths.

Introducing a new song, Bonfire Of Teenagers, Morrissey asked the audience how come they all knew the name Myra Hindley, Ian Brady’s evil accomplice, but few could identify the man who bombed Manchester Arena in 2017, killing 22 mainly young victims, injuring and traumatising another 800? When Morrissey first performed the song, in Las Vegas, he told a shocked audience that the arena bombing was ‘Britain’s 9/11’.

Yet, in America, while most people are familiar with notorious serial killers such as Jeffrey Dahmer and Ted Bundy, about the only 9/11 hijacker they’ve heard of is Mohammed Atta. At the Palladium, O’Neill reports, audience members were stunned and some looked a little ashamed.

Five years on from the bombing, Morrissey is still furious, not just at the suicide bomber, a British Muslim of Libyan extraction called Salman Abedi, but at the ‘culture of amnesia’ which surrounded the aftermath of the attack.

Over the years I’ve criticised the pathetic, passive response to every Islamist atrocity, from 9/11 to the Charlie Hebdo slaughter in Paris. They seem to think that if we all link hands, wave candles and sing Kumbaya, terrorism will melt away. 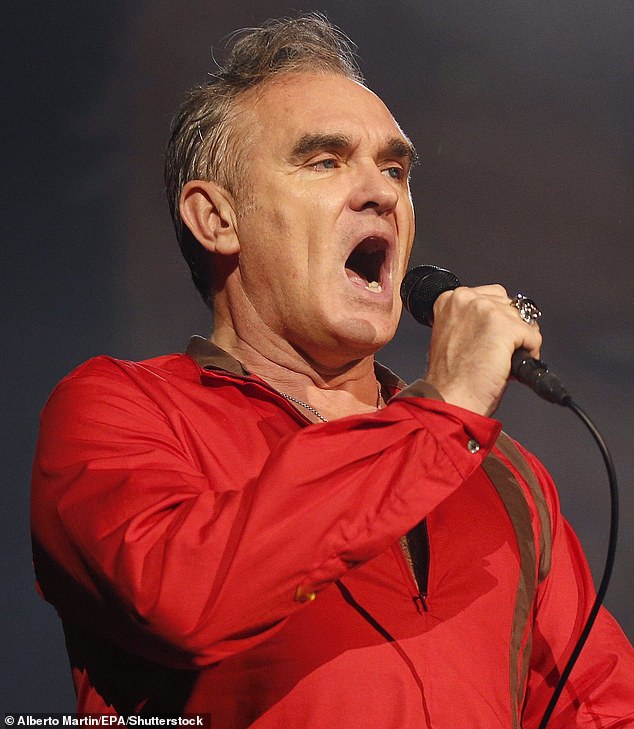 Richard Littlejohn: Introducing a new song, Bonfire Of Teenagers, Morrissey asked the audience how come they all knew the name Myra Hindley, Ian Brady’s evil accomplice, but few could identify the man who bombed Manchester Arena in 2017

In Manchester, after the arena bombing, mourners were encouraged to sing Don’t Look Back In Anger, by local heroes Oasis.

Morrissey rejects the ubiquitous ‘turn another cheek’ response. And quite right, too. He has no intention of forgiving nor forgetting. He told his audience in Vegas:

‘In Jolly Old England, most people won’t talk about it. But I will . . .’ In a savage condemnation of the moral cowardice encouraged by the politicians, he sings:

And the silly people sing: Don’t Look Back in Anger,

And the morons swing and say: Don’t Look Back in Anger,

I can assure you I will look back in anger till the day I die . . .

The number ends with a haunting refrain, which should shame head-in-the-sand apologists from Westminster to Staffordshire council, forever ignoring reality while raising the spectre of their favourite Far-Right bogeymen:

As if we haven’t got enough problems with illegal cross-Channel immigration, along comes a new threat to our porous borders. In a week when it was revealed that at least 10,000 young Albanian men have arrived in Britain by dinghy, only to disappear into criminality and the black economy, we now learn that the people traffickers have expanded their lucrative business model to include animals. The Mail on Sunday reports a huge increase in the number of dogs being trafficked from Europe.

Officials say there is a very real risk of a rabies outbreak caused by dogs from Serbia being smuggled in on fake pet passports. How long before word spreads around the world and we are confronted by boatloads of Afghan Hounds, Rhodesian Ridgebacks and Tibetan Shih Tzus claiming asylum? Maybe we should send some Border Collies to Dover to round ’em up and send them to Rwanda. 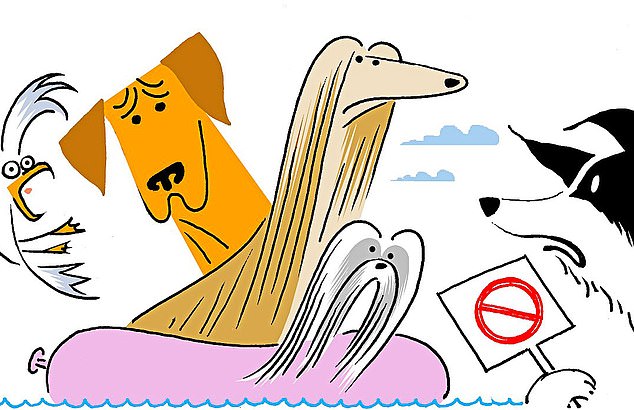 The RNLI helping rescue a migrant crossing boat trying to reach the UK earlier this month. Among the casualties were a family of four, including a 14-year-old girl, believed to be from Afghanistan

On Wednesday, Tottenham’s players had shed their LGBQWERTY+ rainbow laces and were wearing shirts ‘raising awareness’ of a food bank, urging fans to make a donation. Wouldn’t it have been easier to appeal to the club’s sponsors — Getir, a delivery service which promises to bring you anything from expensive tubs of Haagen-Dazs ice cream to ready meals in minutes.

And Just Eat, advertised by Snoop Doggy Dogg, which will whisk such delicacies as a Big Mac and chips or a Balti to your door on those occasions when you can’t be bothered to get off the sofa and waddle down to the local food bank.

Did somebody say . . . just give it a rest and get on with the football?

The Private Eye comic strip It’s Grim Up North London was made flesh this week. Just Stop Oil glued themselves to Upper Street, Islington, the one place outside Swampy’s tunnels where people are behind them. Next to Hampstead Tube station, I spotted a homeless man selling not the Big Issue but second-hand books to the Left-wing literati. You couldn’t make it up. 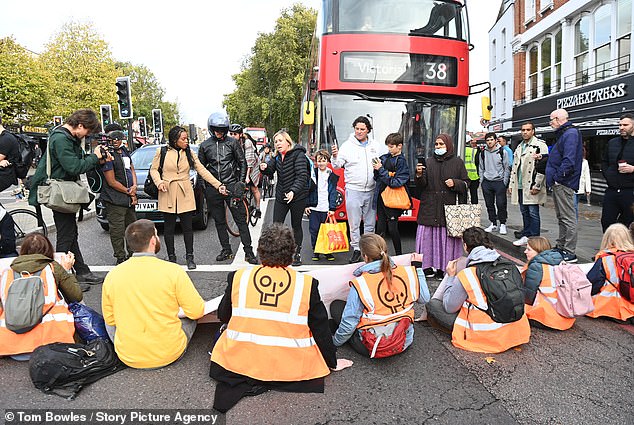 Just Stop Oil protesters block traffic in Islington this morning on their 22nd day of action across the month of October, as they continue their demands for the UK government to halt new fossil fuel licensing

Oh, how we all giggled at Sleepy Joe Biden calling our new PM ‘Rasheed Sunook’. But what if it had been Donald Trump, or any other conservative, mangling Sunak’s name? Left-wing politicans, the Twitterarti, the BBC and the mainstream media in the U.S. would have gone into meltdown, screaming racism, white supremacy and demanding his head on a pike and a grovelling apology. We’d never have heard the last of it.