Midway through the first episode of the relentlessly promoted The Masked Singer, host Osher Günsberg described the singing contest as "proudly the most ridiculous show on television".

Over decades, from Australian Idol to The Bachelor, Günsberg has dutifully demonstrated that he will do his best to get into the spirit of the show that he's fronting. With this ostentatiously wacky effort, which loudly shrieks "family fun!", he has his work cut out for him staying brightly upbeat. Ever the trouper, he dons a loudly snazzy suit and adopts a tone of fizzy excitement to announce that "TV's wildest singing show has arrived!" 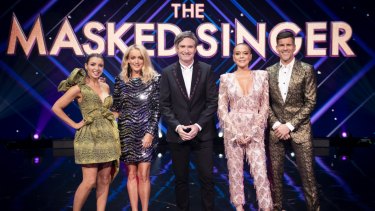 Also, he explains for those who have somehow managed to avoid the saturation-level pre-publicity, that TMS is "not a whodunit, it's a whosungit".

Dodging the carpet-bombing of the advertising campaign leading up to the launch would not have been easy: 10 has plugged its new show with a fervour that suggests it's the most thrilling development in television since the invention of the remote control. The network clearly has high hopes that its adaptation of this South Korean format will boost its run through the "back end" of the ratings season.

On the basis of the numbers for the premiere, it looks as though the promotion and the novelty of the format paid off, with the episode attracting 1.162 million viewers across the capital cities. Anything over a million would've been seen as a triumph for 10.

The production is built on a fresh tweak to the hardy staple of a singing contest as the contestants appear in elaborate costumes that conceal their identities. Panellists Dannii Minogue, Dave Hughes, Lindsay Lohan and Jackie "O" Henderson initially watch a clip that offers clues to the identity of the vocalist. Then they observe their performance, sharing thoughts about the quality of the contestant's voice and movements. Each panellist can ask a question of the singer, usually receiving a cryptic reply. Then each has a stab at guessing who's concealed in the costume. 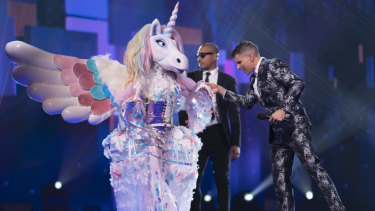 The opener presented Alien v Prawn, Octopus v Robot and Unicorn v Wolf. Each round has a winner, voted by the panel and studio audience and, at the end of the show, one of the three losers is booted from the competition and their mask is removed.

The light-hearted tone is ideal for comedian Hughes who quips early on, "I feel like I'm in Mean Girls and I've been invited to the cool girls' table". The reference to Lohan's acting career is apposite because what she's doing here, other than collecting a fee, is a fair question. And given this is her first trip to Australia, she might have some trouble identifying the locals concealed beneath the costumes, even after the big reveals.

She's an example of stunt casting, aimed at grabbing headlines, chosen less for her expertise than her capacity to attract attention. She's also clearly out of place, trying to get into the swing of things while maintaining her cool: "This is trippy isn't it?" she remarks. "Who needs Burning Man when you have this?"

By contrast, Minogue, once an unexceptional singer and actress, has become a smoothly professional reality TV regular who turns up dressed to the nines, ready for repartee and primed to deliver all that's required of her. So fourth panellist Henderson is relegated to the position of fifth wheel, the one most easily overlooked in the making-an-impact stakes. 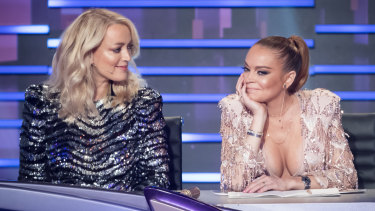 Whatever the reactions in terms of viewer response, the real stars of this show aren't the panellists or the performers: they're the people behind the scenes responsible for the over-the-top costumes, the set design and the choreography. Because TMS is all about colour and movement, the singing is a less important component of the viewing experience – even if the Robot did deliver an impressive rendition of Hold Back the River.

The hook is who is concealed in those wild costumes. And for those who sit through the show – probably at the urging of young kids, judging by the audience at the preview for 10's "inner sanctum" – it's hard to resist the guessing-game element. Is that Nikki Webster in there? Or Julia Morris? And surely Guy Pearce wouldn't agree to this?

Evidently, an unadorned battle of vocal talent would today seem quaintly old-fashioned. A gimmick is required. Back in 2012, we first saw the swivelling red chairs on The Voice as it introduced a new spin on the singing contest, and it's proven to be a stayer for Nine. Now it's crazy costumes and mystery performers in a stunt that could prove to be a fleeting novelty, a punchline or a more lasting proposition.

To some extent, that depends on the calibre of the contestants that 10 is able to attract. For nothing would be more disappointing, especially to the youthful audience that the network is hoping to entice, than repeatedly getting to the big reveals with viewers finding that they have no clue who that actor, actress, singer, sports person, reality TV star or former politician is.