Rio gets the government cold shoulder

It has been a terrible year for Rio Tinto since the mining giant blasted 46,000 years of history to smithereens at Western Australia’s Juukan Gorge in May. Since then, the company has turfed some members of its executive team deemed responsible for the catastrophe — including then-chief executive Jean-Sebastien Jacques — and has issued an apology. On that front, Rio is “absolutely committed to listening, learning and changing”.

Rio’s chairman, Simon Thompson, has continued the mop-up job, jetting into Australia in mid-November to meet the Juukan Gorge’s traditional owners, the Puutu Kunti Kurrama and Pinikura people (PKKP), for the first time.

The London-based boss completed two weeks of quarantine in a Perth hotel, before travelling north to the Pilbara region. He also met Rio’s WA employees on the trip, but the company — predictably — is keen to stress that the PKKP was the chairman’s main priority.

Rather handily, the trip coincided with the release of a parliamentary inquiry into Rio’s Juukan Gorge detonation, which branded the act as “inexcusable” and ordered the miner to pay reparations to the PKKP.

If there’s any confusion as to how low the $42.8 billion miner has sunk in the government’s estimation, Thompson’s political schedule during his trip is telling. Thompson caught up with just one federal MP during his visit. Resource Minister Keith Pitt found time in the diary to meet with Thompson, but not much. 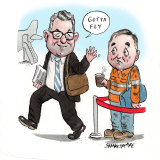 Pitt summoned Thompson for a flying visit at Brisbane’s airport where he had just 15 minutes spare for the chairman, who then departed Brisvegas for his return to London.

Thompson’s team didn’t even bother requesting meetings with Prime Minister Scott Morrison or Treasurer Josh Frydenberg. Perhaps by then, Thompson knew he wouldn’t be welcome. Of course, Rio’s government relations team headed by former Colin Barnett adviser Brian Pontifex is adept at reading the room, as is Rio’s external consultant, former Nationals federal director Scott Mitchell. After treating Australia as a distant after-thought for a decade despite remaining entirely reliant on WA iron ore to stay afloat, it will take more than reparations to clean up Rio’s image among policymakers.

There were fireworks in Canberra this week during elections for the eight-member Federal Parliament Press Gallery committee, which represents journalists inside Parliament House.

As one hardened pollie chaser put it: “It’s been messy as s#!t” — and that doesn’t relate to the leadership challenge for the presidency. In that respect, perennial aspirant Michael Keating lost out to this masthead’s chief political correspondent, David Crowe, badly. He scored just 15 votes to Crowe’s 137. His brother, Rob Keating — also of Keating Media, no relation to the former PM – took on Australian Financial Review’s political correspondent Andrew Tillett for the secretary’s role. He fared worse, securing just seven votes to Tillett’s 134.

But the real fireworks happened in the cheap seats — or four general positions on the committee — open to journalists across all outlets. News Corp’s Jade Gailberger and Herald Sun colleague Tamsin Rose both nominated, breaking a convention where each bureau puts up just one candidate.

The women amicably agreed to encourage the gallery to vote for both of them in the first-past-the-post ballot. But things are never straightforward in the gallery, particularly when senior political reporters are involved.

Gallery veteran Samantha Maiden, who has returned to News Corp after a long stint outside the majors, is once again at the centre of controversy over her role in the election, and a belief she appointed herself — unprompted — as campaign manager for Rose. Whether Rose wanted help is another question.

Either way, Gailberger eventually won out securing 108 votes, along with The Age's James Massola, ABC’s Stephanie Borys and The Guardian’s Mike Bowers. Rose missed out.

Both Rose and Gailberger — bruised — have kept low profiles ever since. Presumably, they have been left wondering why they bothered getting involved in the first place. Politicians must be looking on with bemusement while News Corp’s bosses chalk up the unedifying display as another day in the office.

And so to the inaugural ABC Pride Awards where the big winner was children’s program Play School. It won the Outstanding Content Award for an episode titled Wrestling, which promoted a sense of belonging for kids regardless of their family type.

CBD had thought that ABC News Breakfast presenter Michael Rowland deserved a gong for a piece to camera in defence of weatherman Nate Byrne, who was trolled after appearing on the ABC Mardi Gras float. Rowland stared down the trollers and declared: “There’s no room for you here.”

Previous Pride activities have included a morning tea bake-off, Mardi Gras rainbow lanyards and workplace events to mark IDAHOBIT, the International Day Against Homophobia, Biphobia and Transphobia. The Pride Awards were held this week via online hook-up, which seems appropriate.