“I hadn’t really ever dealt with global media shaming.”

Rose McGowan said she intended to make a statement about the objectification of women when she wore her famous see-through dress at the 1998 VMA’s, but the backlash was more than she bargained for.

During an interview with Yahoo Entertainment, the actress said the reaction to the fashion statement was “kind of hard” to deal with, as she said she was harshly criticized.

“They slut shamed me like crazy,” the “Scream” actress said. “I hadn’t really ever dealt with global media shaming.”

McGowan detailed how she wore the dress in her “first big public appearance” after she was allegedly raped by Harvey Weinstein in 1997.

“I just felt like, ‘Oh Hollywood, would you want a body just that you can use and throw away? Then I’ve got one for you!'” she explained. “It was like at the end of ‘Gladiator’ when he comes out and he’s like, ‘Are you not entertained?'”

“And if you look at me, I did it with power,” she continued. “I didn’t do it with my hand on my hip to be sexy. Most of the women that are dressed like that on the red carpet, it’s a calculated, sexy move to turn people on. Mine was like, ‘I’m gonna f–k with your brain. I’m going to blow your brain up.’ And nobody had done it.”

McGowan accused Weinstein of raping her in his hotel room at the 1997 Sundance Film Festival. Weinstein denied McGowan’s allegations in 2018.

While speaking with Yahoo, the actress also revealed how her boyfriend at the time of the VMA’s — Marilyn Manson — was told about Weinstein’s alleged assault.

“He found out because he would ask my friend, ‘What’s wrong with this girl? She wakes up screaming at night and soaking wet in the bed and the sheets are wet. She does it every night, like two or three times a night.’ I would have terrible nightmares, PTSD stuff. So, we had to talk about it then.”

Regarding her VMA’s red carpet look, McGowan said she has no regrets.

“You know, when you do stuff sometimes on instinct and in a mood, like when a mood overtakes you on, you analyze what it was that brought you to that mood or that choice,” she continued. “So, I’ve certainly had a lot of time to analyze and I’m looking at the timeline. But I completely understand why I did what I did.” 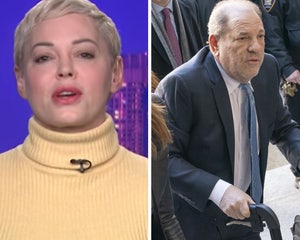