Royals rally around Kate: King Charles and Queen Consort will attend Princess of Wales’ carol service on day the second part of Harry and Meghan’s bombshell show is released

The King and Queen Consort will join the Princess of Wales for her annual carol service at Westminster Abbey on the same day as the second instalment of Harry and Meghan’s documentary airs on Netflix in a show of solidarity.

King Charles and Queen Consort Camilla will attend the Carol service organised by mother-of-three Kate Middleton and also attended by Prince William on Thursday, December 15, as the Duke and Duchess of Sussex’s £88 million docuseries is dropped on the streaming platform.

Kensington Palace confirmed today that ‘The New Fab Four’ as they have been dubbed will attend the ceremony together. The announcement comes the day after the second trailer for Harry & Meghan dropped, which saw Prince Harry, 38, declare there was a ‘dirty game’ going on as others discussed a ‘war on Meghan’. 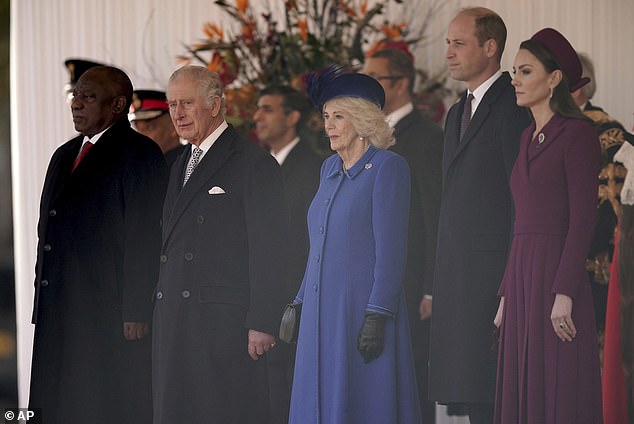 King Charles and Queen Consort Camilla will join the Prince and Princess of Wales at Westminster Abbey for Kate’s carol service next Thursday, December 15, as the second instalment of Harry & Meghan drops on Netflix. Pictured: The ‘new Fab Four’ at Horse Guards Parade during the state visit of South African President Cyril Ramaphosa this month

During the teaser, tech CEO Christopher Bouzy is heard claiming that the couple’s experience has been ‘about hatred, about race’ as a strikingly intimate and previously unseen clip flashes up of an exasperated Harry holding a hand to his face as Meghan passes behind him while heavily pregnant with their daughter, Lili.

After a series of clips of photographers and newspapers being printed, Meghan says, ‘I realised, they’re never going to protect you’ before she is seen once again crying. Harry then adds, ‘I was terrified, I didn’t want history to repeat itself.’ 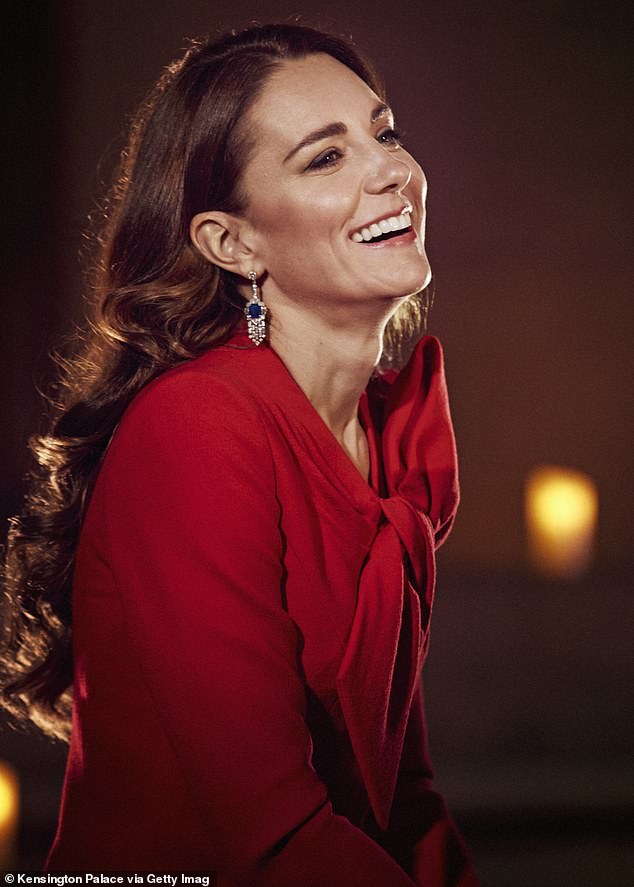 The Princess of Wales gave Good Morning Britain viewers a choice between three carols which will be sung at the end of her Christmas service on December 15. The royal mother-of-three, 40, pictured during her Westminster Abbey service in December 2021 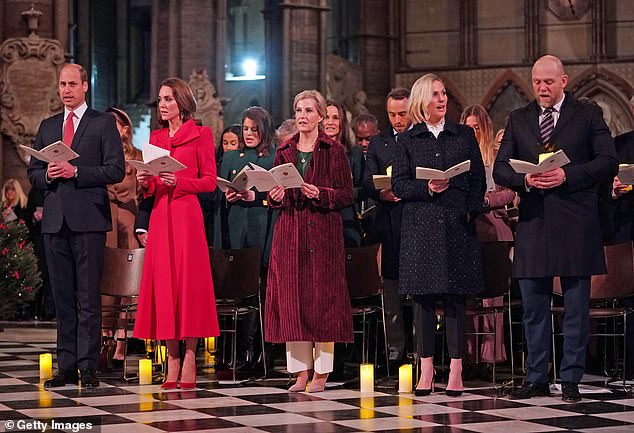 The Prince and Princess of Wales, Countess of Wessex and Zara and Mike Tindall pictured at the Duchess’ carol service last year. GMB viewers voted for O’ Come, All Ye Faithful to be sung at this year’s service

Today the streaming giant confirmed volume one will launch on December 8 – exactly three months after the death of Harry’s grandmother Queen Elizabeth II – while the second volume will be released on December 15 – clashing with the Princess of Wales’ carol service.

The teaser opens with a scene of Harry and Meghan in a car, seemingly in America, as the duke says: ‘It’s really hard to look back on it now and go ”what on earth happened?”

As videos play of the couple announcing their engagement and their wedding in 2018, a news clip voiceover by Piers Morgan says: ‘She’s becoming a royal rock star’.

Another scene plays of the Sussexes on a royal walkabout as a member of the public shouts ‘Meghan, we love you!’

It cuts to Meghan saying ‘and then’ before snapping her fingers with Harry adding: ‘Everything changed’.

The Royal Family will be hoping to distract from the chatter surrounding the documentary as they attend the Princess of Wales’s Carol Service at Wesminster Abbey.

Kate, 40, recently revealed she will include O’ Come, All Ye Faithful in the service, after asking Good Morning Britain viewers a choice of three carols to vote for.

It will air on ITV1 on Christmas Eve.

The purpose of the service is to recognise selflessness among individuals and communities around the UK and highlight the importance of supporting others during difficult times.

The event, which is spearheaded by the Princess of Wales band supported by The Royal Foundation, will showcase the ‘joy’ of coming together in friendships and community events that support people in times of difficulty and loss.

It is designed to appeal to people of all faiths, as well as people who do not practice faith or religion.

To celebrate such values, some special guests will be invited to the Abbey in recognition of their efforts to help the people around them.

Last year, the Princess’s event was attended by her husband Prince William, as well as Zara and Mike Tindall and Sophie Wessex.

Princesses Beatrice and Eugenie were also in attendance and were pictured singing along to the carols and hymns.

It was also a family affair for the Princess, with her parents Carole and Michael Middleton, as well as her siblings James and Pippa, also in attendance.

During the service, speakers were invited to address the crowd, with the Prince of Wales making a speech as well as ITV presenter Kate Garraway.

Westminster Abbey will be adorned with decorations to mark the event, where some favourite Christmas carols and readings will be performed.

Katie Rawcliffe, head of entertainment commissioning at ITV, said: ‘It is a real honour to be the broadcast partner for the Royal Carols again this year. Viewers are in for a very special festive treat.’