SARAH VINE on the scandalous costs of dementia care to families

SARAH VINE: Who’s got the backbone to end this dementia outrage?

Dementia is the cruellest of diseases. It robs you of your faculties, your dignity, your identity. Except it’s not. A disease, that is.

Such is my ignorance of this subject, I found out only a few days ago that dementia is not considered an illness, per se. Not according to the NHS, at least.

I’m sure those who suffer its tyranny – and figures released yesterday by the Alzheimer’s Society show they are on the increase, particularly in the under-65s – would beg to differ. Those who care for them would, too. 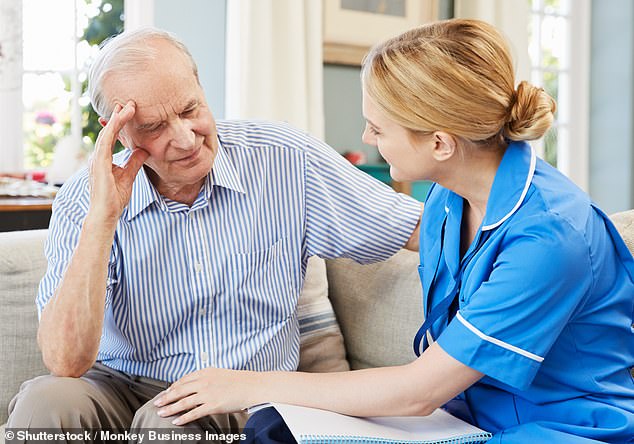 Decisions need to be made about who is and is not entitled to free care. Tough decisions, ones that will not make anyone any friends. That’s why this issue needs someone with a strong moral compass and an even stronger backbone to address it [File photo]

But there it is: currently dementia is not considered a primary care need. Which means that if you are unlucky enough to get it, the bill’s on you.

No one in my family has (yet) been diagnosed with dementia of any kind, although my grandmother did get a little forgetful towards the end.

But it was nothing compared to the stories I hear from friends and readers who, since I mentioned this iniquity in my Mail column last week, have written in their droves. 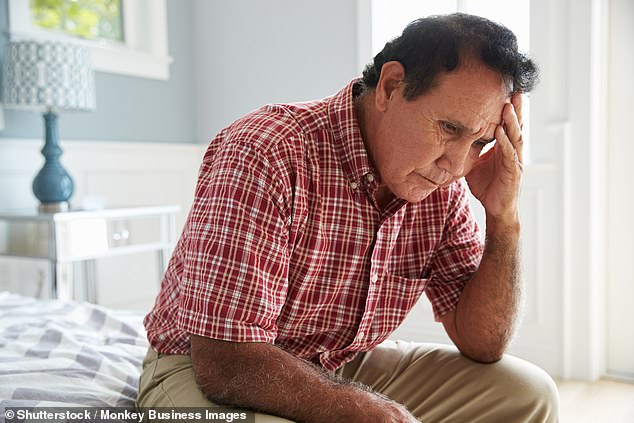 To blame is a political establishment that is too busy arguing among itself and jostling for power to tackle a problem that, sooner or later, will touch us all one way or another [File photo]

Each family’s tale of sadness and suffering truly touches the heart.

Tales of spouses not only robbed of their loved ones in all but flesh, but also families placed under crippling financial pressure as they struggle to cope with the responsibility of caring for fathers, mothers, sisters and brothers who can no longer carry out the most basic of daily functions for themselves.

These are people who are made to jump through hoops by social services in order to obtain the most paltry and inadequate levels of assistance; families who see all they have worked hard for throughout their lives eaten up by exorbitant care home fees, often in exchange for the most basic of services.

All in all, £15 billion has been gobbled up since 2017, just so dementia sufferers can have the same basic human rights we all take for granted. It is nothing short of a scandal.

Those to blame are not the carers and the medics, who do what they can with very limited resources.

To blame is a political establishment that is too busy arguing among itself and jostling for power to tackle a problem that, sooner or later, will touch us all one way or another. 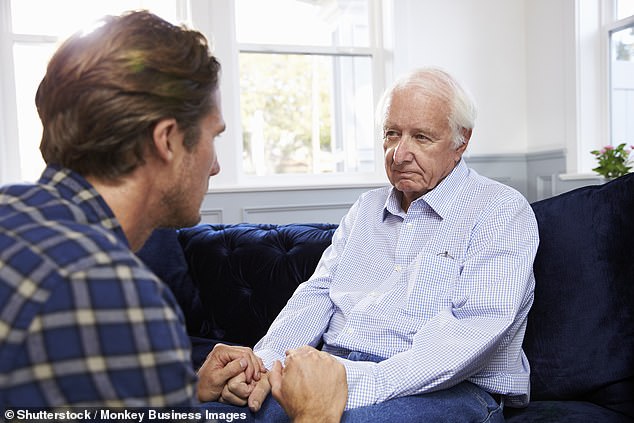 I have a deeply personal view: if there is to be no help, I believe Parliament should pass a law allowing assisted suicide. Because I, for one, would rather die with my dignity intact than endure the prospect of a twilight spent being a drain on my family [File photo]

This goes far deeper than funding or staffing resources. It’s to do with political cowardice; a reluctance to have the hard conversations around social care policy that need to be had if we are to tackle this issue.

The fact is that the Government does not have unlimited resources to spend on the NHS. Decisions need to be made about who is and is not entitled to free care. Tough decisions, ones that will not make anyone any friends.

That’s why this issue needs someone with a strong moral compass and an even stronger backbone to address it. The Government has promised a green paper but it has not been forthcoming.

One of the first acts of any incoming prime minister has to be ordering an urgent review of government strategy in relation to this devastating illness.

I have a deeply personal view: if there is to be no help, I believe Parliament should pass a law allowing assisted suicide. Because I, for one, would rather die with my dignity intact than endure the prospect of a twilight spent being a drain on my family.

Many will, of course, have a different view. But at the very least we must have action.

Read the harrowing experiences on these pages of the readers who responded to my column last week, and I dare anyone to disagree. 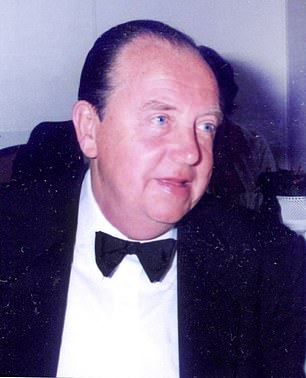 Tom Darnley, a former buyer for an electrical firm, was 85 and had end-stage dementia when he had to go into a care home after a rapid deterioration

Tom Darnley, a former buyer for an electrical firm, was 85 and had end-stage dementia when he had to go into a care home after a rapid deterioration.

His house had to be sold to pay the fees, which – over the next two years – amounted to £70,000, as his daughter Julie Perry, 63, from Kidderminster, Worcestershire, explains…

In 2016, when the team came to assess whether the local authority would pay for my father to stay in a care home, my brother and I thought there was no way they could say no.

My dad, who was 85, and had had dementia for four years, was bed-bound, unable to feed himself or to properly make his needs known. He frequently had hallucinations, and was incontinent.

He had been sent to the care home from hospital, where he was admitted bruised and confused after a major fall at home. At the hospital, the doctors said he had end-stage dementia and might have only weeks to live.

The nurse at hospital who tried to assess his needs to fast-track him to a care home said he was in such a bad way she could not complete her assessment. Obviously, there was no way he would cope at home even with carers.

He got 12 weeks at the home paid for by the local clinical commissioning group and when that came to an end, Dad was assessed by a social worker and a nursing assessor.

They said that out of the total fees of £1,250 a week, they would pay just £120 as a nursing allowance. It was to cover the element of his care related to nursing – the rest of his care, they argued, was social need, and therefore they would not pay for that.

Dad was so poorly he could not eat at all. I would put food into his mouth and he could not swallow. It would dribble out of his mouth. He couldn’t talk and had several mini strokes. I didn’t see how the authority could think that £120 a week would cover the nursing care he needed.

It felt like a slap in the face. How much worse did he need to be to get full funding?

I felt they twisted things to avoid paying. They said Dad regularly got outside. In fact, I occasionally took him outside in a wheelchair – but that was about three times in six months.

What else could we do? There was no question of him staying at home. So we had to put his house on the market to pay for the fees. We sold it for £200,000 and went through the money at an alarming rate.

I was always worried that we might need to move him somewhere cheaper.

Dad sadly died in November 2018, aged 87, and by that time, just two years in a home had cost £70,000. Even then I had to chase the clinical commissioning group for six months to get back almost £10,000 in unpaid nursing allowance.

I don’t see how it can be right that my dad, who worked up until the age of 65 and paid his taxes, should have to then pay for his own care.

And when I look back now, not only do I mourn Dad, I just feel the most terrific anger that he was treated so unfairly. It’s a national scandal in the true sense of the word.

My husband was diagnosed with Alzheimer’s in 2012. I finally had to give up the struggle to cope with him at home on my own, and he is now in a residential home.

We inherited our parents’ ethos of careful management of our lives and our money, and are therefore in a position where we are self-funding.

The money we have to find for his care home fees is huge. The only help we get is the Care Allowance of £87 a week.

The fees we have to pay are much higher than the rate the council negotiates for anyone who isn’t self-funding. So we are subsidising those people who receive the same care.

I’m suffering from the effects of a bereavement without a death, and struggling to cope with my financial situation.

We need someone to highlight the problems we all face with this very cruel disease.

My late mother, who died in 2011, was unable to walk, talk or feed herself, and was doubly incontinent for the last few years of her life. She was in a care home for more than four years, the fees for which were met by herself and her family, and her house had to be sold.

Since her death, we have spent eight years fighting for her care costs to be retrospectively funded through the Continuing Care Fund (of which we had no knowledge before her death). We have been turned down at every stage of appeal.

The grounds on each occasion are that her needs were not a primary health need. All dementia cases are deemed to be ‘social needs’ only.

The official definition of social needs includes such examples as ‘helping to access bus timetables’. This, for a woman who could not walk or read and wouldn’t have even known what a bus was.

Politicians have failed to resolve this issue, and have shown no signs of wanting to. The situation is so unjust.

If you have heart disease or cancer in your later years, you will be looked after. If you have dementia, you or your family will have to pay for almost the entirety of your care until you die. It is an absolute disgrace.