Diary of a social blunderbuss: MP’s wife Sasha Swire isn’t afraid to hurt people’s feelings. But it’s her huge sense of entitlement – making her almost oblivious to the comic absurdity of her story – that most tickles CRAIG BROWN

After two decades of being expected to grin and bear it, Sasha Swire has had her revenge. Diary Of An MP’s Wife contains a litany of abuse. Theresa May is ‘humourless’, Tony Blair is ‘a slimeball’, Julian Fellowes is ‘faintly ridiculous’, Jeremy Hunt is ‘oily’, Anna Soubry is ‘irritating’, Nadine Dorries is ‘mad’ and William Hague is ‘only ever interested in himself’.

And so it goes on – Dominic Cummings ‘looks like one of those odd amoebas you find in jars in school science labs’, Boris Johnson is ‘driven by jealousy’, Prince Charles’s fingers are ‘like sausages’, and Prince Andrew’s chairmanship of a group of businessmen is ‘excruciatingly painful to watch’. At various times, John Bercow is called ‘the dreaded’, ‘the little weasel’, ‘the little creep’, ‘the revolting’ and ‘that little goblin’.

Even Her Majesty the Queen gets it in the neck, for her failure to acknowledge the importance of Sasha Swire: ‘She fixes her beady eyes on me briefly, then swans past, not saying a word. She is telling me I am just a plus-one, not a player or heroine.’

In her introduction, Swire claims that ‘at no time did I write with the intention of publication’, though two sentences later she contradicts herself. ‘I can’t say the thought didn’t exist at the back of my mind’, she writes, ‘but I always pushed it away because I thought my family, my husband’s colleagues and my friends would see it as an act of betrayal.’ 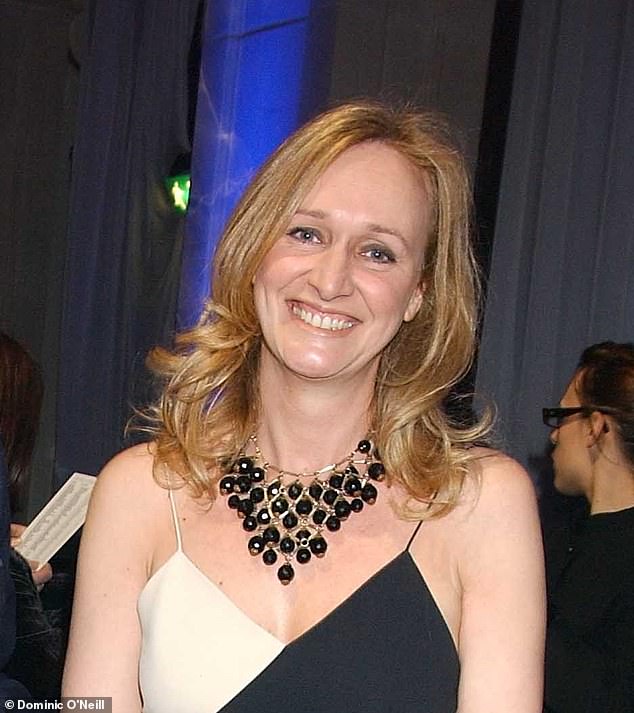 After two decades of being expected to grin and bear it, Sasha Swire, pictured, has had her revenge

Which is, of course, what it is. When Swire’s good friend Samantha Cameron confided in her that she had drunk a large Negroni at breakfast before her husband’s resignation speech, was she expecting her to publish it?

Another friend, Amber Rudd, mentioned over lunch that working for Theresa May was ‘like having a dragon breathing down her neck… you can’t talk to her like a normal person; she is just very cold.’ In it went.

Her friend Kate Fall told her that ‘she bumped into Sarah Vine at some party, who said what an utter nightmare it was living with her husband’.

Scribble, scribble, scribble! Diaries are constructed from the ruins of broken confidences. Despite Swire having had ahem, ahem, no thought of publication, last year, ‘out of curiosity and somewhat foolishly’ she passed a few extracts to a top agent (by sheer luck, the same top agent who handled the diaries of Chris Mullin and Kenneth Williams and the memoirs of Ann Widdecombe).

‘And before I knew it, I was swept up in a publishing tornado.’

For tornado, read cheque. Needless to say, she justifies publication for feminist reasons. ‘I think it is very rare indeed to read a female perspective on what is still a very male-dominated and secret world.’ 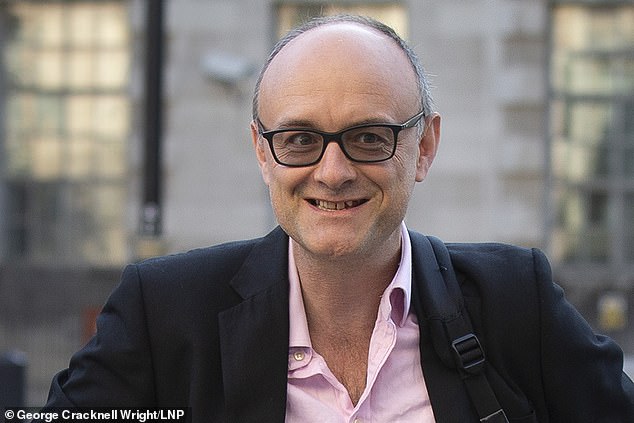 In Swire’s diaries, she says Dominic Cummings, pictured, ‘looks like one of those odd amoebas you find in jars in school science labs’

‘I regret if I have offended anyone… I imagine some entries might offend without meaning to do so. If so, I apologise.’ She is being disingenuous.

In her entry for February 28, 2017, she observes that David Cameron is hard at work on an autobiography. Never backward in coming forward, she offers a warning. ‘Of course, unless he is prepared to settle scores and wash his dirty linen in public it won’t exactly fly off the shelves, and I doubt he will do that as he is too much of a gent.’

I wonder if Swire will extend her apologies to her own daughters?

She might not be on a par with Edwina Currie, who called one of her daughters ‘hard as nails’ in her diaries, and the other ‘so shallow and trivial’, and even outed one of them for having illegal underage sex.

Nevertheless, it seems unlikely that young Siena Swire will be thrilled at her mother telling the world about her crying fits, or her ‘unhealthy obsession’ with Made In Chelsea’s Jamie Laing, who, in one passage, she stalks ‘up and down the King’s Road, such is her great love for him’.

On the other hand, while discretion may be the better part of valour, it is the worst part of a diary.

‘What is more dull than a discreet diary?’ asked the great political diarist Chips Channon.

The former Labour Home Secretary David Blunkett once published a diary of 850 pages, having first excised anything personal: it was one of the dullest books I have ever read. 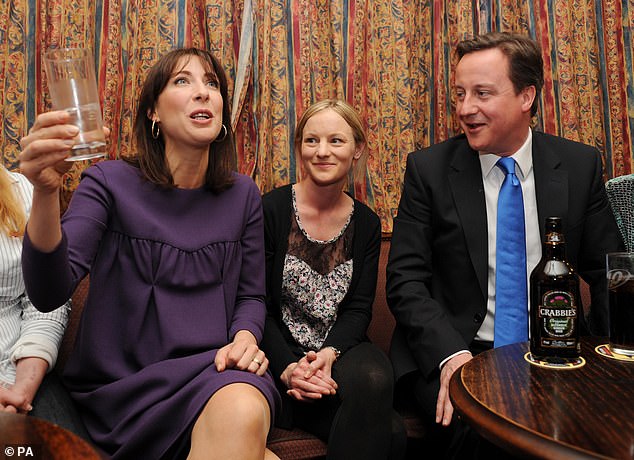 Samantha and David Cameron, pictured, are heavily referenced in the controversial book

The self-portrait that emerges from Swire’s diaries is of a social blunderbuss, one of those irritating people who delight in saying the wrong thing. Of her relationship with David Cameron, she reflects, ‘He likes me because I am not remotely nervous around him; I’m cheeky, lewd and sometimes a little bit too challenging.’

And how! Over a grand dinner at Chequers, she shouts across at Cameron that his plans for Syria are all wrong. When Francis Maude complains to her that Theresa May is ‘so boring and grey’, she replies, ‘Pot calling kettle black, Francis. You were the most boring politician of the century.’

At a formal dinner at No 10, she tells Boris Johnson, ‘You can’t serve this food, it’s disgusting.’

She has a perverse fondness for setting people at their unease. In 2010, she sits next to the Countess of Wessex at an official dinner.

‘So, bet he didn’t tell you he was Royal when he married you.’

She looks at me, puzzled. ‘I knew he was a Royal, of course I did. What do you mean by that?’

Later, she concludes that Sophie Wessex is ‘definitely sad’. But the poor woman would probably have been all smiles if she had been placed next to someone else.

On the other hand, the best diarists have always been blabbermouths, eager and willing to hurt people’s feelings. 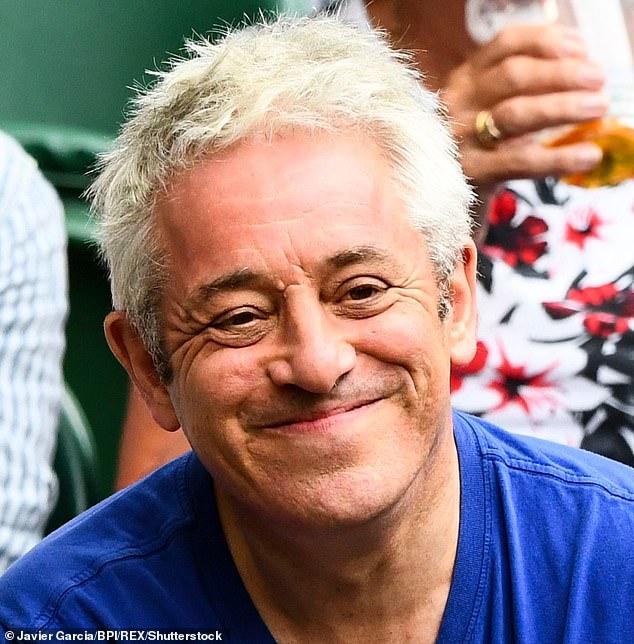 At various times, John Bercow, pictured, is called ‘the dreaded’, ‘the little weasel’, ‘the little creep’, ‘the revolting’ and ‘that little goblin’

Swire has clearly been influenced by the brilliantly witty diaries of the Thatcherite Minister Alan Clark. They even share some of the same targets, among them Michael Heseltine, William Hague and the Queen. But Swire’s waspishness lacks Clark’s iconoclastic precision: he once complained of Her Majesty’s ‘frumpish and ill-natured features’.

Inevitably, given that her role was subordinate to someone who was himself subordinate, many of Swire’s anecdotes are second-, or even third-hand. As the diaries roll on, it becomes increasingly obvious that she was often not in the same room, or even in the same country, when the events she describes occurred. Instead, she just scribbled down the anecdotes her husband Hugo told her on his return from this or that get-together.

Did he know that she was writing it all down? Judging by the book’s dedication ‘To Hugo – Sorry!’ it seems not.

Despite what you may have read in the papers, many of the diary entries are on the dull side: holidays in Wales, patronising remarks (‘I always find Amber so politically naive’) and hand-me-down political overviews (‘the fragmentation of British politics continues apace…’). She also offers her own predictions, most of which have been rendered defunct by time. Before the 2017 Election, she predicts that Theresa May ‘will walk it’ and that ‘Boris is clearly not a leader-in-waiting’.

The book is more successful as a revealing portrait of a posh public school coterie who, in a weird throwback to the 1950s, found themselves with the keys to No 10.

‘We are like kids in a sweet shop,’ she writes of those early days.

In an additional twist, she has such an innate sense of entitlement that she remains largely unaware of the full comic absurdity of her narrative. Her diary starts when Cameron becomes Prime Minister in 2010. Sasha and Hugo – who she describes, optimistically, as ‘renowned in political circles for his charm and humour’ – are out shopping for antiques when the call comes through from Dave, who offers him a job as Northern Ireland Minister. For the rest of the day, Hugo keeps asking her to repeat the words, ‘Yes, Minister’ because ‘he likes the tone’.

In Northern Ireland, the Troubles have only just begun. To her horror, Swire finds that two sets of curtains in their swanky new apartment at Hillsborough Castle have been whisked away by the wife of the Secretary of State. ‘I don’t care who she is, it’s bloody bad manners!’ says Swire. ‘I’m going straight to the top on this one!’ Without further ado, she puts a call through to No 10. 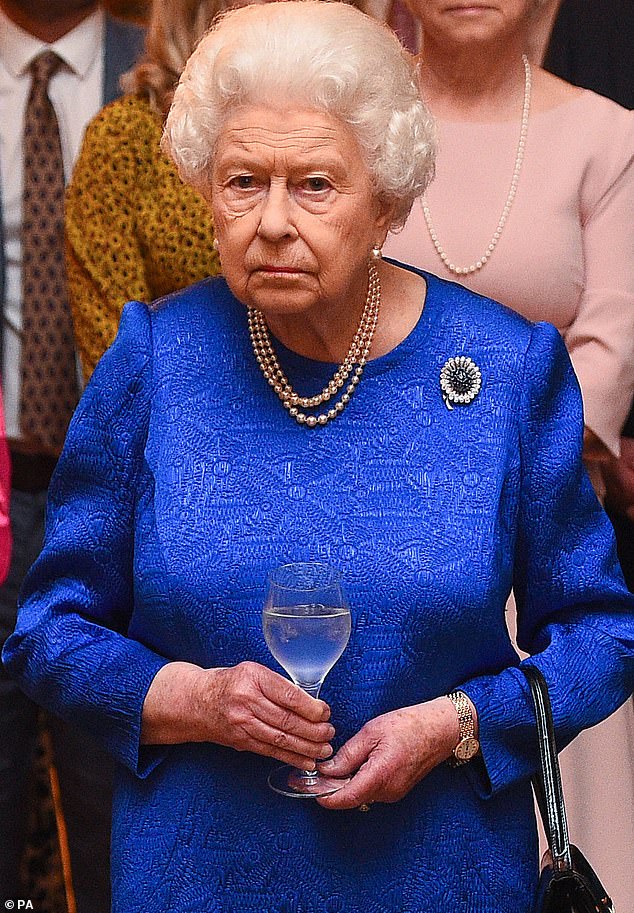 Even Her Majesty the Queen, pictured, gets it in the neck, for her failure to acknowledge the importance of Sasha Swire

Later, when Hugo is moved to the Foreign Office, he is approached by a fellow Minister. ‘You couldn’t give me South America, could you, old chap? You know my wife is from Venezuela.’ The energetic scratching of backs continues throughout his career, and beyond.

After Hugo’s ministerial days are over, ‘Alan Duncan said en passant that he was putting his name forward to be Prime Minister’s trade envoy to the Pacific Alliance’. Nothing comes of it, but not to worry. ‘Hugo has quite an extensive list of directorships and chairmanships at the moment,’ notes Swire.

The right to preferment permeates the book: Swire regularly complains that her father, the former Defence Secretary Sir John Nott, has never been elevated to the House of Lords, and that, as an Old Etonian, her husband has been excluded from the Cabinet due to an absurd bias towards women and members of ethnic minorities.

But it all remains very chummy. Looking around the Camerons’ party in 2011, she concludes that ‘The closeness of this circle is unprecedented. They are all here, the ones that eat, drink, party together, they are all intimately interlocked… We all holiday together, stay in each other’s grace-and-favour homes, our children play together, we text each other, bypassing the civil servants.’

For no clear reason, five years later Cameron rewards Hugo with a knighthood in his Resignation Honours. There is bit of a hullabaloo in the press. ‘I don’t know what all the fuss is about’ complains Swire. ‘Why can’t Dave pack out the list with his cronies if he wants to?’

Despite Hugo’s apparently renowned charm and humour, he comes across as more of an amiable klutz – the Mr Bean of the Foreign Office.

In South Korea he presses the wrong buttons in the loo, and emerges showered with water. Opening a school sports centre in Shanghai, he throws himself to the ground when the fireworks go off, thinking he’s under attack.

Back home, he mixes up his breath freshener and his lens-cleaning liquid, and complains that his glasses are permanently fogged up and his mouth tastes funny. Swire dutifully logs all these pratfalls. Could these diaries be an unconscious act of revenge?

It emerges that Sir Hugo’s chief claim to fame is that, in his youth, he enjoyed a brief fling with someone very glamorous. This is certainly what interests Prime Minister Boris Johnson.

If he did, then he is linked not only to Mick Jagger but to Rupert Murdoch, and perhaps, via Wendy Deng, to Tony Blair. Well, knighthoods have been handed out for less.