Victoria’s hospitals and schools will not have enough money to properly cater for a growing population if the state does not receive top-ups in GST funding, Treasurer Tim Pallas has warned.

Federal Treasurer Josh Frydenberg has rejected a plea from the NSW and Victorian governments to pay more GST to the country’s two largest states to compensate for outsized spending on the pandemic. The states had the longest lockdowns and spent billions of dollars supporting individuals and businesses. 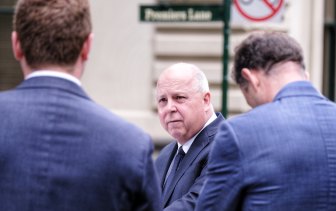 Mr Pallas said Victoria could be $3 billion worse off over the next three years if the GST distribution to states was not re-calculated to adjust for pandemic-related spending.

“What it will mean is we won’t be able to necessarily employ to the growth profile that we’re seeing in health and education … because we don’t have the assurance that we will have the revenue base coming in,” he said.

“It doesn’t mean people will lose their jobs. It means that we won’t necessarily be able to feed for the growth and economic opportunity and demand that is coming through in the state.”

”I spoke to Dom [NSW Premier Dominic Perrottet] last night, and I just hope when it comes to allocating the GST, that the federal government will actually take account of the incredible damage … [caused by] these floods, whether it be NSW and Queensland, and so too, they should take account of the pandemic.“ 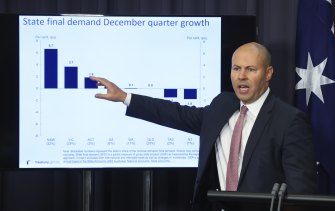 Mr Frydenberg did not agree to the states’ push to give responsibility to the Commonwealth Grants Commission to consider pandemic spending in GST handouts.

“I have not requested that the CGC alter its methodologies to assess states’ GST needs in responding to COVID-19 for this update,” he wrote in a March 4 letter to the board of state and territory treasurers.

“I understand there was not a unanimous view among our treasuries that out-of-cycle changes in the CGC’s methodologies were warranted, and that such changes could undermine the integrity of the GST distribution system.”

Renewed hostilities over GST allocation – a frequent point of contention between state and federal government over two decades – have arguably taken on greater significance because of the high levels of debt incurred by state governments during the pandemic.

Ratings agency S&P Global Ratings this week warned it may downgrade state government credit ratings – making it more expensive to borrow money – if debt incurred to fight COVID-19 was not reigned in.

Victoria’s debt is on track to quadruple to more than $200 billion between 2019 and 2025, while NSW is not far behind with gross debt just below $200 billion.

On the same day that Victoria and NSW reignited the GST war with the Commonwealth, a bipartisan Victorian Parliamentary committee inquiry found Victoria would lose $1.2 billion a year after 2026 if a “no worse off” GST guarantee was not extended. 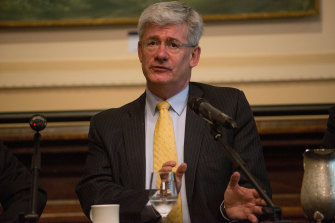 Independent economist Saul Eslake made a submission to the Victorian inquiry. Credit:Jesse Marlow

After repeated complaints from Western Australia – which previously received less funding because of its unique ability to raise revenue from mining royalties – the federal government announced new rules for dividing up the GST pool in 2018.

The change resulted in Western Australia receiving billions more at the expense of eastern states. To cushion the blow, the Commonwealth assured states they would, until 2027, receive no less than they would have under the old model.

The Victorian, Tasmanian and South Australian governments made submissions to the Victorian inquiry to seek a change to the funding formula.

In his submission to the inquiry, independent economist Saul Eslake wrote: “All Australian taxpayers – including those living in Victoria – should be appalled that the Commonwealth Government will be incurring more debt [to be serviced, and ultimately repaid, by future generations of Australian taxpayers] in order to transfer billions of dollars to the government of the richest state [WA] in Australia.”

“The GST cannot be a plaything for federal politicians seeking to achieve political outcomes. It has to be real, it’s got to be substantial, and it’s got to be fair,” he said.

“Unfortunately it has been distorted in such a way that governments [and] treasurers cannot probably campaign for the future.”