The head of the Victorian meat workers’ union has asked the state government make the industry exempt from a coronavirus vaccine mandate and allow unvaccinated staff to continue working if they take a rapid antigen test every day.

Fearing next Friday’s compulsory vaccination rule for all authorised workers will render 10 to 20 per cent of the industry’s workforce unable to work, Paul Conway from the Australian Meat Industry Employees voiced his “complete opposition” to the policy. 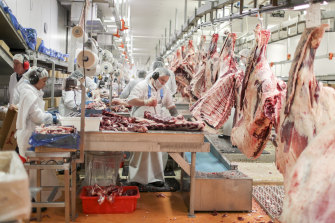 The union boss said the majority of meat workers have been vaccinated but the remainder should have options.Credit:Alex Ellinghausen

Speaking after the Andrews government announced plans to buy almost 2.2 million rapid tests on Wednesday, Mr Conway said abattoirs were already operating at reduced capacity due to restrictions and rapid tests were the key tool to prevent future disruption.

He said while 80 per cent of the meat industry was vaccinated, “we can’t afford to lose up to 20 per cent of our staff”. A sudden loss of workers next week was a very real risk and could have a “dramatic effect” on meat production and prices heading into the festive season, Mr Conway said.

“It’s not an industry of anti-vaxxers. Every single worker has received a vaccine against Q Fever. Our view is if you want to get somewhere, you’re going to get further with honey than vinegar,” said Mr Conway, the union’s Victorian secretary.

“If you say to those employees ‘OK, you pay for those rapid kits, you take one every day, prove to us you’re negative and then come to work’, that is a good incentive and a middle ground for people…” 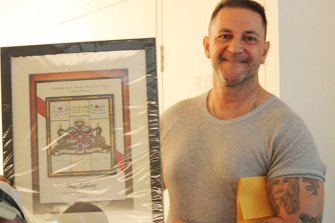 On Wednesday, Victoria recorded 1420 new cases of COVID-19 and 11 deaths as a result of the virus – the highest daily death toll this year.

Health Minister Martin Foley announced that more than two million rapid tests would be first used in healthcare, followed by high-risk settings such as schools, child care and prisons. From November 1, they will also be available to buy in pharmacies for home use.

“In the circumstances of them not being as accurate but much more timely than the PCR test, they will add to the tool kit of how … we manage and get on with returning to something that looks like a COVID-safe world,” Mr Foley said.

As Melbourne’s outbreak spread to the Royal Children’s Hospital cancer ward, patients were forced to self-isolate in their rooms for 14 days after a parent who visited their child at the hospital a few days ago later tested positive.

The hospital’s chief executive, Bernadette McDonald, said exposures were occurring regularly and “that’s why we have our screening processes in place, so the minute somebody is positive we can find out”.

An outbreak has also hit Carlton United Brewery, where four workers have tested positive although a spokeswoman confirmed “supply of beer has not been impacted by this”.

A woman in South Australia who tested positive to COVID-19 after returning from a trip to Victoria is believed to have been the victim of a targeted attack on Wednesday, with local police investigating a suspicious car fire. A Holden sedan was set alight at the home of the mother of four in Mount Gambier, which entered a week-long lockdown following a legal visit to family on the Victorian side of the border. No injuries were reported as a result of the incident.

Six Victorian abattoirs – a high-risk setting for the spread of coronavirus – have cut production in recent weeks after large chunks of their workforce were stood down due to virus exposures that led to self-isolation periods.

Mr Conway’s scepticism of the Andrews government’s mandate, the widest-spanning edict in Australia so far, replicates criticism from the Victorian Farmers Federation that it could spark labour shortages.

The meat union boss said he conveyed his rapid testing suggestion in meetings with the state Agriculture and Health departments at the weekend but was not expecting a response.

“We’ve been fielding a lot of concerned calls from our members. You have to question the source of their views – some of it is misinformation, fearmongering, whatever you want to call it. But if you take that away, the final result is still the same: people are turned off by the sledgehammer approach,” Mr Conway said.

“Make workers pay for the tests themselves, give it a couple of months and I dare say by Christmas many will say ‘stuff it, I’ll get the vaccine’.”

Rapid antigen test kits sold overseas cost from $10 up to $110 and Mr Foley said negotiations on how much the government would pay for its initial 2.2 million purchase were ongoing.

The Health Minister said rapid tests, which can provide a result after only 15 minutes, could also be used for people in home quarantine and those attending major events.

Rapid tests are only used among hotel quarantine workers at present and Wednesday’s announcement comes after months of resistance from Victorian health authorities.

Chief Health Officer Brett Sutton insisted the tests would be most effective when large amounts of COVID-19 were spreading among the community.

In a sign of where rapid tests could be beneficial as the state hits its vaccination targets and schools fully reopen, four of 85,000 VCE students who sat the General Achievement Test in Melbourne on Tuesday had tested positive by Wednesday.

Retail and Fast Food Workers Union secretary Josh Cullinan said he expected rapid tests to become an element in reducing employees’ exposure to the virus and quarantine periods but “we’re unclear on the exact details because we’re still assessing how accurate the tests are”.