Sculpting sound and light: the unpredictablity of electricity

Sometime during his time at Goldsmith's Art College in London, Haroon Mirza started working with electricity. You would have to say it's an elusive medium to choose.

You can't see it or touch it; it has to be tricked into buzzing or beeping with interference.

Mirza sets up sounds that trigger matching lights and lights that set off that clicking crackle in speakers; he will ramp up sound to the point of pain and then cut it completely, bringing darkness down with it. 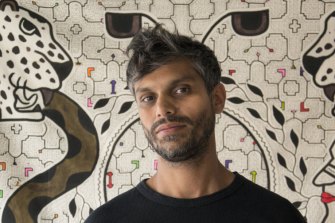 His works can be spectacular or look no more exciting than a circuit board, but the experiences he creates can be unexpectedly visceral. "It's kind of like bringing an electrical signal to the forefront," he says, "in its fragility and its power."

We are sitting upstairs in his Hackney studio. A team works downstairs on a grid of screens, although I note they have resorted to writing Mirza's exhibition timetable on the front window where it can't be missed: an office planner, basically. Old school.

We are also surrounded by screens and wires, facing down a desktop Google gizmo that answers questions like the voice in Spike Jonze's film Her. "It's like one of these home things; they're really stupid," Mirza chuckles. "I mean, so stupid. OK Google! Are you absurd?" A young woman's well-modulated voice responds. "Me, mad? Nah!" Mirza shakes his head. "Ridiculous."

The Google toy features in The Construction of an Act, an immersive environment including live performances by dancers and musicians that Mirza has composed – the word he uses, comparing the experience to opera – as the centrepiece of his forthcoming exhibition at ACCA.

It is fascinating and baffling and I confess to being blindsided by a long account he gives of the murder of an Amazonian shaman that inspired the scenography, although he says viewers don't necessarily need to know anything about it.

"Because the work itself is hopefully rich enough. But people can go there if they want. And I'm telling you about it because it's probably going to be more interesting than saying 'oh, there is sound coming from electricity', which is maybe interesting in itself but not what has compelled me to make the work." 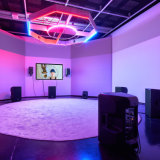 The late shaman's ritualistic cures, involving psychedelic drug potions and singing, were marketed worldwide by a commercial organisation that put up images of her ceremonies on YouTube. Mirza was intrigued by her healing songs, which seemed to include predictions of her own death at the hands of a foreign visitor.

Some of the lyrics, which were translated into Spanish and then English, are included in a text he wrote that sets the stage for his own video and sound, the music that will be composed in situ by James Rushford and dance devised by Julie Cunningham. "I took each line and did my own interpretation of it, bringing it into a context of science," he says. "It's sort of sci-fi."

So many questions about the shaman's story intrigue him: how the Amerindians isolated the right plants to make psychotropic drugs; who is being exploited when foreigners are parachuted into a remote culture with the expectation of being magically healed; where to draw the line on cultural appropriation. If the shaman hadn't been promoted to suggestible Westerners, both she and her murderer would still be alive. "But this is the thing, because of this hysteria around cultural appropriation, it's paralysed the engagement with other cultures."

He is particularly alive to this question as a Londoner from a Pakistani family. "I'm 100 per cent guilty of cultural appropriation. Because I've had to assimilate a British culture." These are the ideas that are swimming behind Construction of an Object, he says, even if they are not explicit. "They inform the work, but then the work itself is this experiential thing, kind of like an opera." 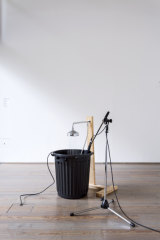 And so we listen to two neurologists talk about the power of music, something the shaman harnessed; we hear and see Tibetan bells resonate; we hear a soprano singer push her voice around the scale in counterpoint to an increasingly complex rhythm of electronic beeps and blasts.

Mirza has had exhibitions of his high-tech son-et-lumiere installations all over the world; he has won numerous prizes, including the Silver Lion for most promising artist at the Venice Biennale. He has also been artist-in-residence at CERN in Switzerland, home of the Hubble telescope, where he had a marvellous time talking to physicists and raiding the recycling bins.

"There's probably things in this room they threw away. Like this sink I made from parts they threw out; you don't even need to rummage." But when he set off for art school, he says, he intended to become a painter. Seascapes were his thing; he painted them throughout his teens in photo-realistic detail. What happened?

"I don't know, it was something that happened accidentally," says Mirza, laughing sheepishly. "There is something about the sound of electricity itself I find really incredible and I just got really enthusiastic about it one day. I'm not sure if this is the reason, but when I was a teenager I got into acid house, which was basically electronic music made with synthesisers. It's the same thing. And I got into that while I was doing LSD, so I think this combination of the psychedelic experience and the sound of electricity was probably forged back then!"

That was evidence of a misspent youth, of course. "But later on I remember messing around with toys and electronics and stuff and realising you could generate sounds from electronic things like fairy lights and LED lighting, meaning you could make the light and sound simultaneously from the same source. So now I compose with electricity, manifested in both light and sound."

And not as far from seascapes as you might think, he adds. "I was thinking about this recently because I'm doing this show about waves. Wave forms, sound waves, light waves, the electro-magnetic spectrum and brain waves but also the sea, you know. So there is something about waves I'm sort of obsessive about. Perhaps that's why I'm into quantum mechanics as well."

The idea of chained light and sound sounds schematic, but Mirza points out that even the electricity we get from the grid is slightly uneven. "It's never really 50 hertz; it sort of fluctuates between 48 and 52 just because of its chaotic nature. Electricity is just as organic as the sea, in a way.

"What we do with electricity is harness it and make use of it, but it's not actually that controllable – and I'm more interested in harnessing the unpredictability of it than the predictability."

"There's one sculpture in the show which is this lightbulb spinning around past a radio, which creates an interference. You hear this buzzing sound – you hear the electricity in it – but it's a really live, chaotic, unstructured sound."

Critics have described his work as beautiful. Some of it is, but some of the images I've seen are mostly wires. I wonder how this painter of oceans sees beauty now. "I have a bit of a love-hate relationship with beauty," he says.

"You can't define beauty, even if a lot of people have tried! There is a certain beauty to natural things and a certain beauty to real experience, you know, as opposed to mediated experience. I'm sure when you listen to this recording, it's not going to be anything like being here. So I think that's where beauty lies, in the experience rather than reproduction." 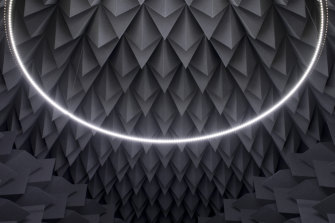 Mirza’s work Then and Now, at the 2011 atVenice Biennale.

Similarly, for the artist it is all about the making of it. "I think this is the thing with paintings: beauty comes from knowing somebody made this canvas more than the image. I always look at the technical stuff as well. I always look at the image afterwards; sometimes I don't see the picture until I've worked out how it's made."

Although it isn't currently popular to say so, everything else comes down to the taste-makers. And who knows when or whether they're right? "All art is wearing the emperor's new clothes. To a certain degree it has to. I think it's important to accept that the emperor does have new clothes and they might be nothing. Because what can be more beautiful than the human body? That's the other side of that story."

The Construction of An Act, ACCA, September 14 – November 17.