Attorney-General Christian Porter’s seat of Pearce has been saved – and the Liberals’ hold on it may be even stronger – in a proposed reshaping of federal electorate boundaries in Western Australia.

The Australian Electoral Commission has proposed abolishing the seat of Stirling, currently held by first-term Liberal MP Vince Connolly, and adjusting the borders of 14 of WA’s 15 remaining electorates. 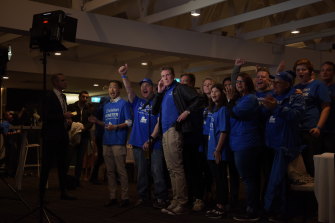 Attorney-General Christian Porter could increase his stronghold on the electorate of Pearce under a proposed seat redistribution.Credit:Marta Pascual Juanola

Although the seat of Pearce has been slashed in size, it has picked up some key Liberal-leaning parts of northern Perth out of the Labor-held electorate of Cowan. And Cowan, held by 0.7 per cent by Labor’s Anne Aly, would take in some ALP-leaning areas around Balga and Mirrabooka from the abolished Stirling. The seat of Tangney, held by Liberal Ben Morton, would absorb Liberal-voting parts of the neighbouring ALP electorate of Burt.

The vast seat of Durack, held by frontbencher Melissa Price, would become even safer for the government after picking up conservative voting rural parts of Pearce.

In an unusual move, the AEC has proposed that the current seat of Canning – named for Alfred Canning who surveyed routes for the state’s rabbit-proof fence – also recognise Sadie Miriam Canning, who became the nation’s first indigenous nurse and matron.

In Victoria, a new seat named in honour of former prime minister Bob Hawke will be created in the region around Bacchus Marsh, between western Melbourne and Ballarat.

Electorate boundaries in the state’s west are proposed to change to accommodate this new seat and more equitably balance the number of voters in the rural and regional west, the AEC said.

The seat of Corangamite will be renamed to honour Yorta Yorta woman Margaret (Lilardia) Elizabeth Tucker.