eSafety Commissioner Julie Inman Grant has sought to reassure the sex worker industry that she will not use proposed new online safety powers to shut down their businesses, amid broader concerns the laws are being rushed through Parliament.

The adult entertainment industry has mounted a campaign against the Online Safety Bill, which the federal government says will establish a “world-first adult cyber abuse scheme”. The proposed laws centre on expanded powers for the e-safety Commissioner, including the ability to issue take-down notices for the removal of abusive and sexually explicit material from websites and social media within 24 hours. 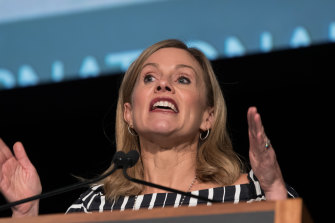 The Senate communications committee will hold a snap public hearing into the bill on Friday. The inquiry was set up after Communications Minister Paul Fletcher introduced the bill to Parliament last week, just ten days after a consultation period on an exposure draft closed.

Eros Australia, a peak body for the adult industry, is concerned the laws will result in “unintended consequences”, such as a purging of explicit content by some platforms, including sex worker profiles, so as to avoid falling foul of the laws.

“As drafted, the online content scheme would provide for the removal of many forms of adult content impacting the livelihood of producers, sex workers, adult retailers and adult entertainment venues,” general manager Rachel Payne said in a written submission to the inquiry.

The government received more than 300 submissions on the draft bill, none of which have been made public, fuelling concerns the feedback was not properly considered before Mr Fletcher tabled the legislation.

“We are concerned that the bill, which gives substantial powers to an unelected official to do a large
body of regulatory work with minimal oversight, is being rushed through Parliament,” the alliance said in its submission.

But Ms Inman Grant said the adult industry’s concerns were ill-founded and her office’s priority under the expanded powers would remain the removal of child sexual abuse material and material that incites, instructs or promotes terrorism or violent crime.

“My role as a regulator is to protect all Australians from online harm, it’s not to restrict the sex industry. What happens between consenting adults is not my concern, as long as it’s not harming others, especially children,” Ms Inman Grant said.

“These are not new restrictions. Australia’s Online Content Scheme has been in place for 20 years and for all of those 20 years the hosting of explicit adult sexual content has been prohibited in Australia.”

She said 99 per cent of the investigations her office conducted in 2020 involved taking action against child abuse material.

“Suggestions the new Online Safety Bill will turn eSafety into an ‘internet filter’ or ‘force sex workers out of business’ reveal a misunderstanding of the law as it currently stands, and the changes proposed in the new bill,” the spokesman said.

Tech giants, Google, Facebook and Twitter have also raised concerns about the scope of the proposed laws and the short turnaround time to consider public feedback.

“This bill was introduced into the House of Representatives a mere 10 days after the public consultation period on the exposure draft of the bill closed,” Google Australia’s director of public policy and government relations Samantha Yorke said in the company’s submission.

A spokesman for the Communications Department said the submissions were considered as they came in over the two-month consultation period, which “allowed sufficient time to critically assess submissions, consider proposed changes to the Act, and to brief the Minister”.