Sick of the election? Go for a walk and let nature heal your soul

Let posters be folded, let corflutes be stacked away. The campaign is over.

On Sunday we awake to the victor and the vanquished. Or perhaps to neither, the fate of the nation still to be counted, and from that who will be in government and who will be prime minister. 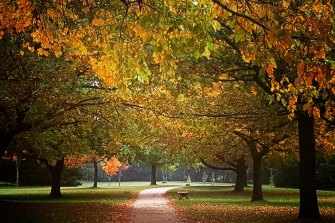 You can place your faith in the certainty of the seasons.Credit:Warwick McFadyen

We awake at the end of a three-year cycle that culminates in a choice. Democracy is a constant work in progress. The deeds and misdeeds of men and women can chip away at the ideal, at the dream of what democracy is, and it is easily chipped away. It is not pure, it is not marble or alabaster on a pedestal out of reach. It is shaped by humans. It cannot, then, be perfect.

But we have faith, despite everything. For each vote is a voice, and if we do not have a voice, what is left? Silence. The silence of political systems where an individual’s voice means nothing.

It is easy to fall, however, into moments of scepticism, cynicism and bleakness at the ragged edges and sometimes rotten core of politics. It is then that a solace can be found in the faith of matters outside the realm, in the ordinary beauty of the world. It won’t change the system. It will, momentarily and perhaps permanently, change you.

Let us go then for a walk in the park, by the flowing stream, under the time-worn limbs of trees, through the fallen leaves and feel that there is indeed in our lives mulch ado.

All elections should be held in autumn. Some may say “but surely spring, the season of the new buds”, but these days hold the colours of a rare beauty. Autumn, more than winter, spring and summer, carries the hard reality of passing, the stillness in the waiting, the hope of rebirth and the realisation of regeneration.

Paul Keating said that when you change the government, you change the country. He’s right. But the extrapolation of that is what then is constant and true, of and to itself? What is the centre? As history has shown, and as Yeats observed, when things fall apart, the centre cannot hold.

Politics is no more than the mirror of the society in which it exists. It’s no surprise that many may feel, as Bob Dylan wrote in Ballad of a Thin Man, that you know something is happening, but you don’t know what it is.

At such times then, as a respite, you can place your faith in the certainty of the seasons. At least for now. It can be through the swirl of leaves drifting to earth, the burble of rushing water, the warble of the magpie. Swim in nature and it has a way of entering the bloodstream, and then the heart.

Call it nature’s way of campaigning.