Horrifying footage shows a cannibalised mink, a decomposing fox and shivering cubs at Finnish fur farms which export millions of pounds worth of pelts to the UK each year

Sickening footage showing a cannibalised mink, a decomposing fox and shivering cubs at fur farms in Finland has exposed the horrifying nature of the fur industry that sells millions of pounds worth of pelts to the UK every year.

Taken by animal rights activists from Humane Society International in the world’s second biggest fur exporter, the video also showed a fox’s corpse being trampled, and animals ramming themselves against the side of their cages.

The UK banned fur farming almost two decades ago but allowed animal fur imports to continue, which have since amounted to £820million according to campaigners.

It is hoped the heart-wrenching videos, taken at 13 farms between April and October 2019, will re-energise calls for a ban on future UK fur imports. 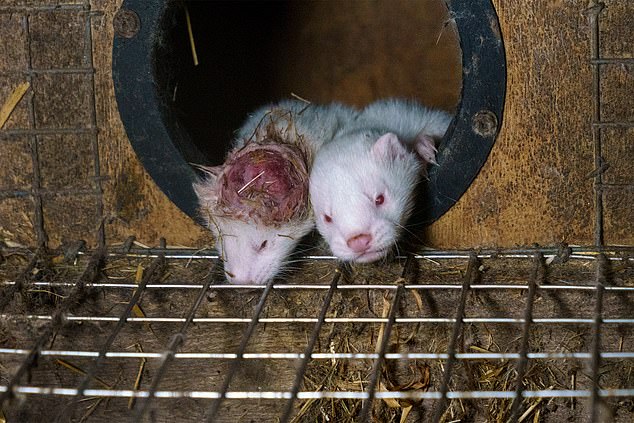 Sickening footage has exposed the true horror of Finnish fur farms after it depicted a mink, pictured, with its head partially cannibalised 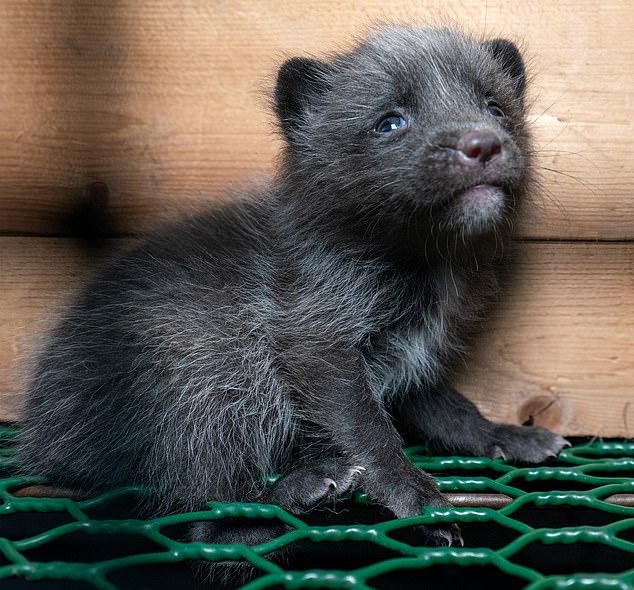 A shivering youngster was also filmed, pictured, by animal rights activists from Humane Society International, who were investigating the farms 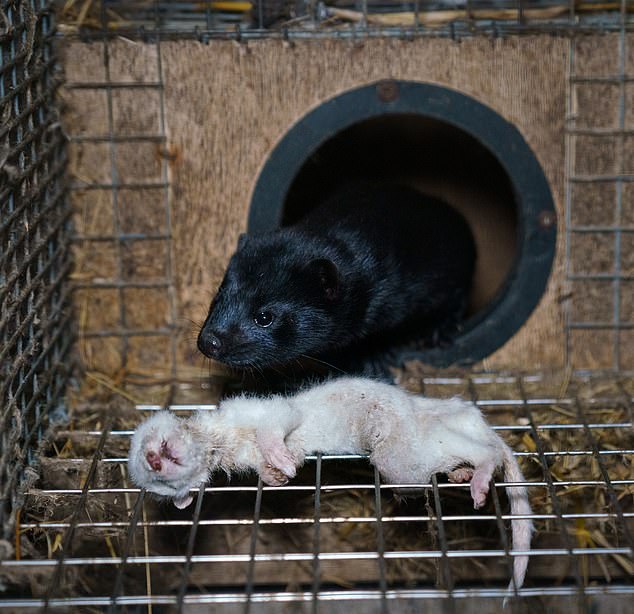 The videos show campaigners moving around the farms and looking into cramped cages, where animals can be seen pacing, shivering, or barely moving.

In one a fox had decomposed so much that its bones were sticking out, and being trampled on by fellow caged animals.

While, in a second, tiny babies hung with all four of their limbs sticking through the wire caging.

Animals in these cages can be electrocuted, killed and skinned when they are just eight months old, claimed fur farm investigator and executive director of Humane Society International Claire Bass.

‘Around two and a half million are kept like this and killed every single year’, she said, ‘for the fur trade of which the UK is a part’. 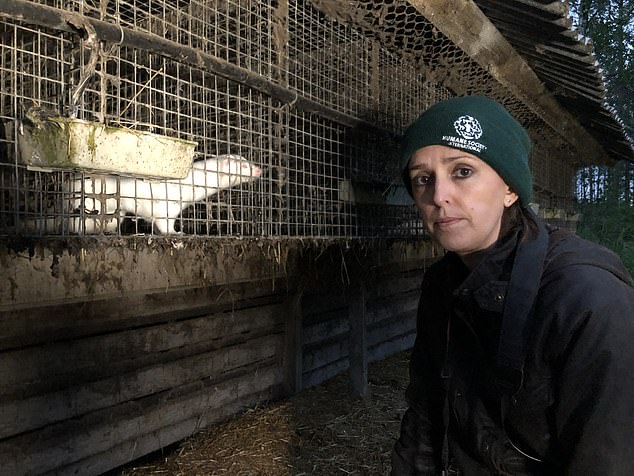 Fur farm investigator and director of Humane Society International Claire Bass, shown at a fur farm in Finland with a mink, said that animals are electrocuted, killed and skinned at the age of eight months 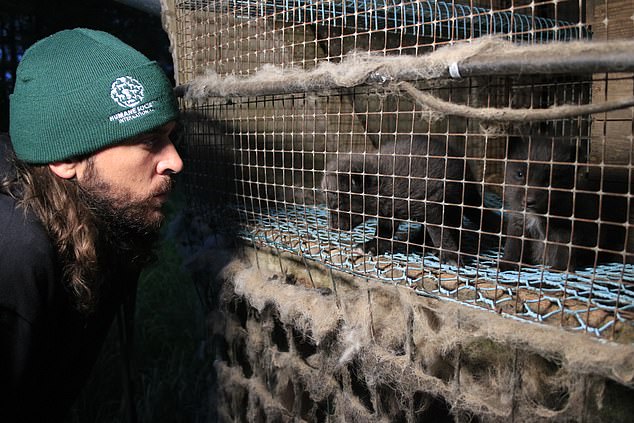 The Only Way is Essex’s Pete Wicks said, after visiting a farm where around 4,000 animals were kept, that the smell and the noise were ‘indescribable’

‘It’s just impossible to imagine how anyone justifies thinking that this is an acceptable way to keep animals.

‘The suffering is just so totally unacceptable. It’s so unnecessary and that’s why we need to consign the fur trade to the history books.’

The Only Way is Essex’s Pete Wicks, who visited a fur farm where around 4,000 animals are housed, said the smell and the noise are ‘indescribable’.

‘To be purchasing anything that is from a farm that is like this what you’re saying is this is an ok way to treat animals.’

Finnish animal rights organisation Oikeutta Elaimille, that visited the farms with Humane Society International, said that the appalling scenes are ‘far from the exception’.

Their spokesman added: ‘Small, barren cages and suffering of the animals are the norm in the fur industry.’ 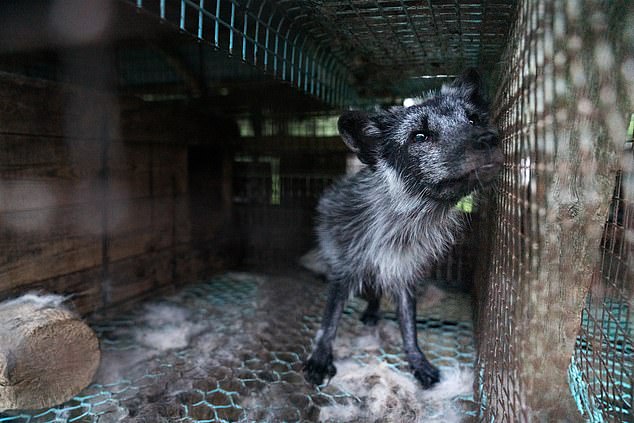 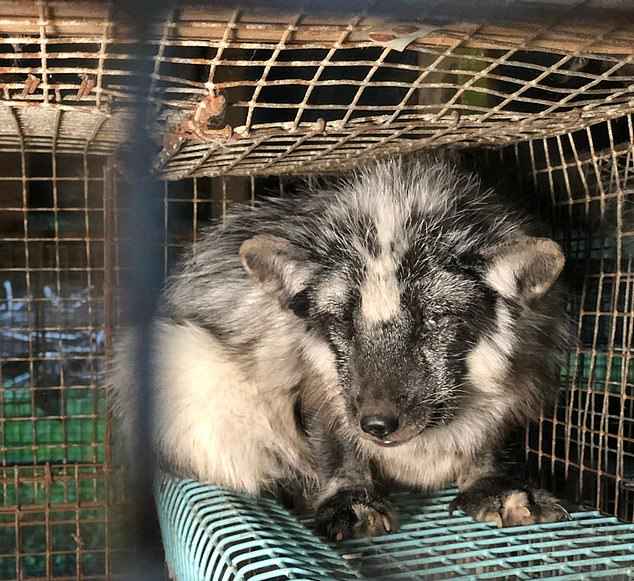 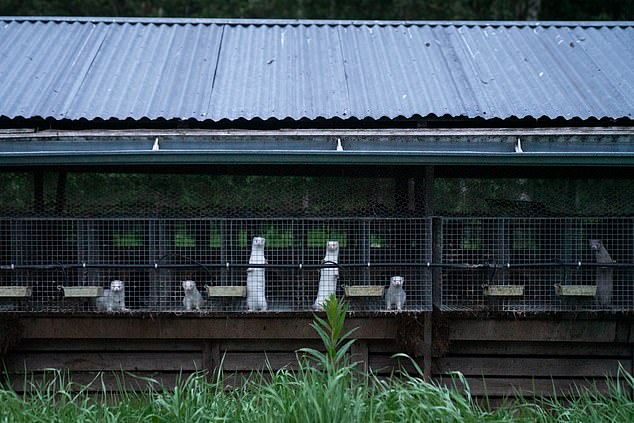 This is a front view of a Finnish fur farm, an animal rights campaigner claimed that these appalling scenes are ‘far from the exception’

An investigation by Humane Society International last year found mink, foxes and raccoon dogs forced to tear each other apart as they suffered in appalling conditions.

The miserable animals were left with open lacerations on their bodies while trapped in tiny cages in Finland before being taken to slaughter.

The UK outlawed the practice in 2000 but continued to import coats from foxes, rabbits, mink, coyotes, raccoon dogs and chinchillas.

Moving to stop this trade would make it the first country to do so, after regional authorities in West Hollywood, Berkley and San Francisco banned it.

After the investigation last year Claire locked herself in a cage for 24 hours outside the Department for Environment, Food and Rural Affairs in London.

As a member of the European Union, the country is subject to European welfare codes on how to keep animals for this industry.

Mink are the most popular animals to keep on fur farms, followed by the blue and silver fox.

The trade bloc also bans the import and export of cat and dog fur.