‘So much at stake’: Joel Edgerton’s risky mission for The Stranger 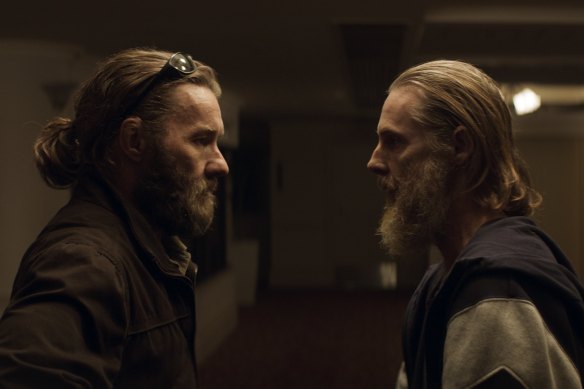 Two men are on a road through nothingness, somewhere in the hinterland of the Sunshine Coast. One is an undercover detective, pretending to be the point man for a shadowy but high-rolling gang of drug runners. The other is probably a child killer. Even if he isn’t, he has plenty to hide – including his real name. Neither man can let his guard slip for a second.

Thomas M. Wright’s The Stranger is a fictionalised interpretation of the real-life hunt for the abductor of 13-year-old Daniel Morcombe, who was kidnapped – and later presumed to have been murdered – in 2003. Brett Peter Cowan was convicted in 2014, following an eight-year series of investigations, and is now serving life imprisonment.

The bones of The Stranger are taken from this real case, but Wright has changed the names, invented characters and refers only briefly to the crime itself, which was committed many years before the story begins. It is the encounter between the hunter and the hunted that is the real meat of this story.

“The mechanics of an undercover investigation are fascinating,” says Joel Edgerton, who plays the detective as well as serving as The Stranger’s producer. “But what fascinated all of us more was the psychology of a relationship of two men who are trapped in a car and trapped in each other’s lives, but who are constantly lying to each other. And that there is so much at stake. Our show is kind of like The Truman Show, but malevolent.”

From the first moment we realise we are in the middle of an undercover operation it is obvious that the police think they have their culprit. This echoes the facts of the real investigation. What they did not have was conclusive evidence – including, most importantly, a body. Only one person knew where it was; they needed him to talk in a way that his interrogators in the initial investigation had not been able to persuade him to do. “This is a ‘Hail Mary’, last resort,” says Wright. “There are very few operative strategies beyond the use of this undercover technique.” 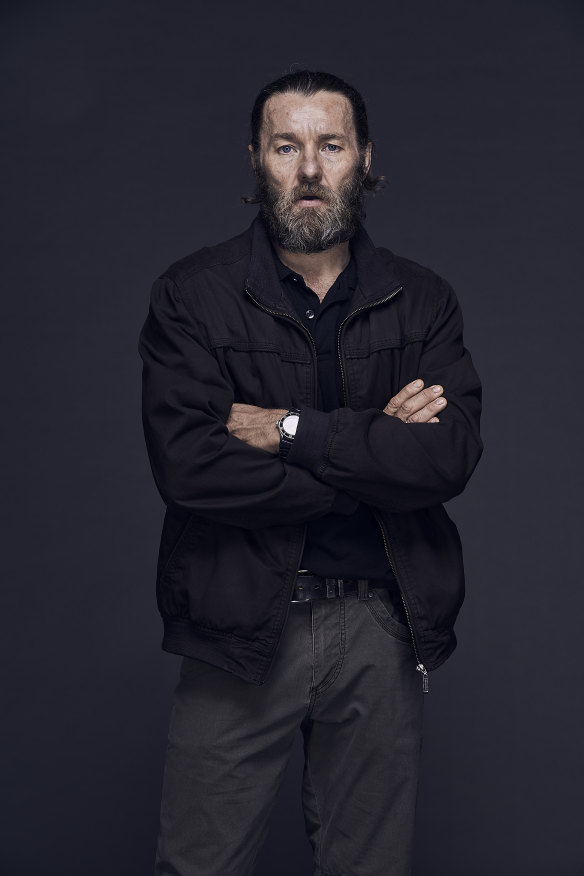 Edgerton is the star and producer of The Stranger.Credit:Ian Routledge

By the time this net begins to tighten in The Stranger, the fictional suspect Peter Morley has moved states, changed his name to Henry Teague and is drifting in search of easy work. He might reasonably think that they’re not going to get him now. As played by Sean Harris – who says he deliberately steered away from researching the real story and, in particular, from finding out anything about Cowan – Teague is an unsavoury figure, someone who makes your flesh crawl despite being pathetically hangdog, asking to be liked. He is also, quite clearly, none too bright. When he falls into conversation with a man on a bus who says he has some work going, he never suspects he is a mark.

Next day, he meets his chief contact, known to him and to us only as Mark. Gruff but seemingly easy-going, “Mark” is charged with getting close to the murderer. Henry needs a mate; it doesn’t take much to win his confidence. The toll that mateship takes on Mark himself, however, is probably beyond a civilian’s comprehension. Having to agree with the opinions and laugh at the jokes coming from this man, “when what you want to do, every moment you’re with him, is destroy everything about him,” says Edgerton. “Yet instead, you’ve got to go ‘oh, that’s so funny!’”

More than that, an investigation involving the police forces in two states depends on his ability to keep laughing convincingly. A few clues – Mark’s anxiety when his son disappears during a game of hide and seek, a sudden burst of tears when he is alone in a forest, a nightmare in which Henry springs his real identity – suggest the tension behind his habitually stony expression. “Imagine if we made this movie and the rule was that we would only get one take of everything,” Edgerton adds. “You still don’t get anywhere close to the stakes involved. Of what it means if you get it wrong.”

It is ostensibly an acting job, but Harris says he sees no real comparison between working undercover and performing for a camera. “It’s like people saying to me ‘oh it must be so dark for you playing Henry’. Well, really, no. I get my food brought to me, I get to go home every night, I get driven to set, I get to hang out with everyone,” he points out.

There is no applause for the performers at the end of a successful undercover operation, no red carpets, no Oscars. Edgerton never met or saw the real “Mark”; nobody will ever do that. If someone in his line of work gets to celebrate at all, it will be at a gathering smaller, Edgerton says, than the number of people in the room where we do this interview. And then they go home, where they have to tell a new set of lies about what they did that day.

Edgerton says with a smile that he did do some research behind the scenes, but he can’t really talk about it. “Because we were investigating the truth, taking that truth and telling a fictionalised version of it, which is about protecting everyone involved.” Whether that protection has been enough is a matter of dispute.

Last May, The Stranger screened – to great acclaim from the audience and critics – at the Cannes Film Festival. The following month, when it was announced that it would be a headline feature at the Melbourne International Film Festival, the Morcombe family protested in strong terms against what they saw as the exploitation of their son’s terrible story. “We think this is most distasteful, most hurtful, and has no community benefit whatsoever,” Bruce Morcombe told the ABC. “All it is, is blood money.”

Daniel Morcombe’s parents appeared regularly in media coverage of their son’s disappearance, setting up a foundation to promote child safety while successfully maintaining public interest in the case. In 2017, it was covered in Casefile: True Crime Podcast. In 2018, Courier Mail crime reporter Kate Kyriacou published The Sting, a forensically detailed and much-admired account of the intricately plotted investigation. The Morcombe family declined to be involved in The Stranger, however, from the outset. “The actor, the cameraman – they’ve all made money out of the movie, but the hurtful thing is, they are using Daniel’s name to promote [it],” Denise Morcombe said. 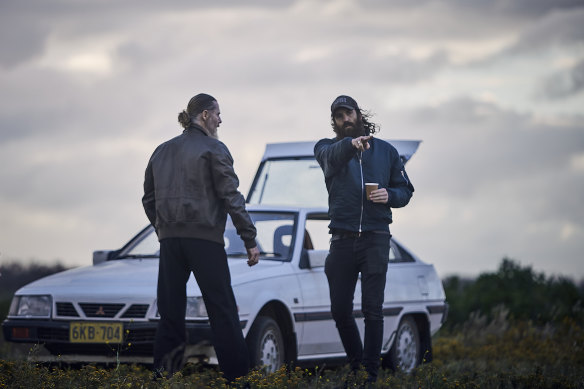 Sean Harris and director Thomas M. Wright on the set of The Stranger.Credit:Ian Routledge/Netflix

Speaking in Cannes after the film’s premiere, Wright said he deliberately avoided linking his story to the real case. “When it comes to the politics of naming the perpetrator or the victim, it became clear very early on that this film was going to be fictionalised. [Naming the individuals] might appear to be a kind of thoughtful gesture, I think it’s really hollow. I thought I had no right to represent that child or any right to presume anything about that family or their grief or what they went through. I also had no interest in representing that real individual who committed the crime.”

What interested him – what would not, he says, let him go when he read the story of the police investigation – was the dark reality of human violence and how other people responded to it. “I’m not innately interested in the police,” he says. “I have a natural distrust of police. It was really the provocation of the material itself and what I saw there that I just could not turn away from. It was the scale of the investigation, the operation and the narrative challenge to find a form for that. It also had to do with the conflict for those central figures.

“And it had to do with questions it raises for me about darkness and human violence, trauma and mental health that have been part of my life and I think they were elements of parts of my own history that I wrestled with, in the making of this film. … I’m not interested in making a public service announcement with this film, but there is a reality of mental health implications for the people in this sort of work.” 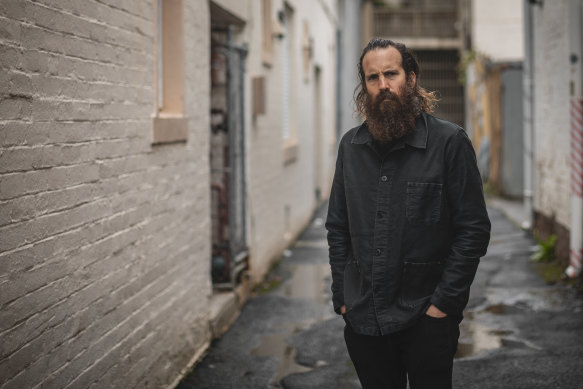 Thomas M. Wright says he’s “not innately interested in the police”, but was drawn to the scale of the investigation.Credit:Scott McNaughton

It was also a story told at one remove from the victim. “These are people who don’t know the victim or the family. As much as the film is defined by the human capacity for violence, all the connections in the film are through empathy.” That included his own response; The Stranger is a personal story. “What I could do is find my own relationship to the subject matter and enter into it as deeply as I could, which led to a seriousness in the way the subject is dealt with and the form of the film. Because there are films that could be made of this material that I have no interest whatsoever in seeing.”

There were detectives they could meet and interview, says Edgerton: not undercover police, but the ones in suits. “Thomas and I in the early stages did a lot of research about the mechanics and about how these things work with undercover operatives, in unison with these detectives,” he says. “But I can’t tell your true story. It’s dishonest for me to say that. I can do as much investigation as I can and then tell a story like your story.” He once asked Wright to send a picture of how he imagined Mark to look. A file arrived, which he opened with some excitement. Wright had sent him a picture of a dog. “A malnourished, gnarly rescue dog.” “Yes,” says Wright. “And you ended up just like him, in your own way.” 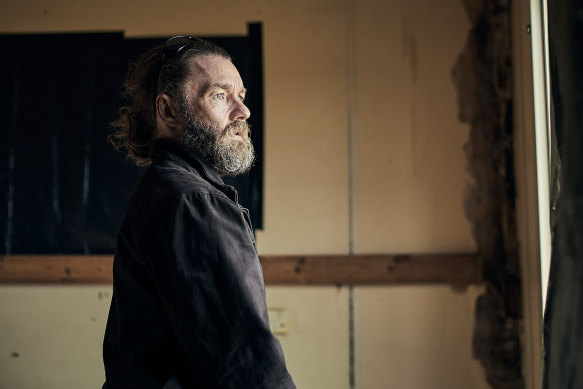 Joel Edgerton in The Stranger: the stakes are incredibly high.Credit:See-Saw Films

But to find this path between truth and fiction, Wright had to keep faith with the darkness in the story that first gripped his imagination. “I think cinema is about finding the correct form for the content you are negotiating,” he says. “It’s funny we talk about television as content. It’s awful. Awful, because it suggests a horizontal filling of time. And cinema for me is really about: where do you find that vertical?

“Where do you find the universal, the timeless, the elements that echo through all stories – and try to craft a story that you can deeply engage in, but that has a shadow side that, if you’re willing to invest, if you’re willing to lean in, will fulfil a bunch of other needs I think we have from stories? [Like] the implication that there is more to life than just a series of events.”